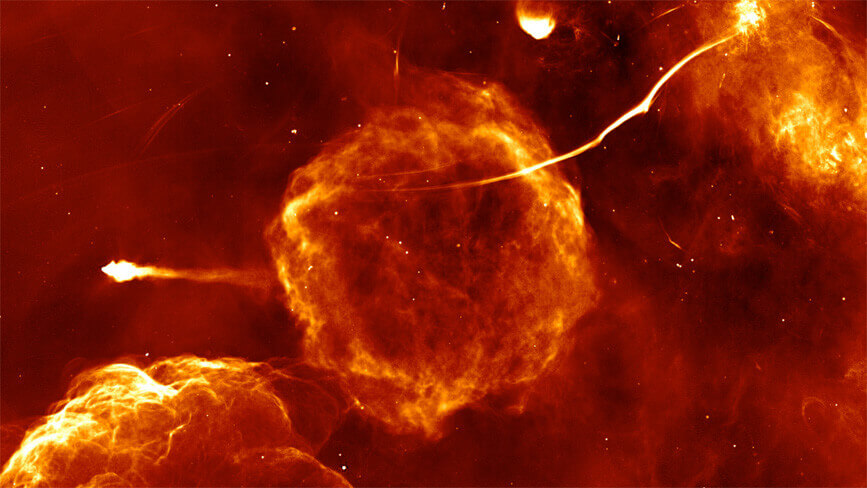 Ever wonder what you might see if your eyes were sensitive to radio waves instead of visible light? Then check out the latest images from the 64-antenna MeerKAT radio telescope in South Africa, revealing the heart of the Milky Way as as it appears in radio emissions.

The stunning imagery shows previously known and newly-discovered features, including supernova remnants, huge magnetised radio filaments and the blazing inferno surrounding the 4-million-solar-mass black hole at the core of the galaxy.

The imagery is based on detailed analysis of a survey carried out during the telescope’s commissioning, resulting in a mosaic of 20 observations captured during 200 hours of telescope time. The result is a 100-megapixel mosaic with a resolution of 4 arc seconds.

The images reveal never-before-seen supernova remnants, including a rare, almost perfectly spherical example, along with numerous stellar nurseries, cirrus-like emissions made up of many parallel radio filaments and a mesmerising view of “the mouse,” a runaway pulsar possibly ejected in a supernova blast.

At the heart of the mosaic is the supermassive black hole at the core of the Milky Way, shining like a giant red eye embedded in a vast cloud of less powerful emissions.

“I’ve spent a lot of time looking at this (mosaic) in the process of working on it, and I never get tired of it,” says Ian Heywood from the University of Oxford, Rhodes University and the South African Radio Astronomy Observatory. He’s the lead author of a study in The Astrophysical Journal.

“When I show this image to people who might be new to radio astronomy, or otherwise unfamiliar with it, I always try to emphasise that radio imaging hasn’t always been this way, and what a leap forward MeerKAT really is in terms of its capabilities,” he said. “It’s been a true privilege to work over the years with colleagues from SARAO who built this fantastic telescope.”