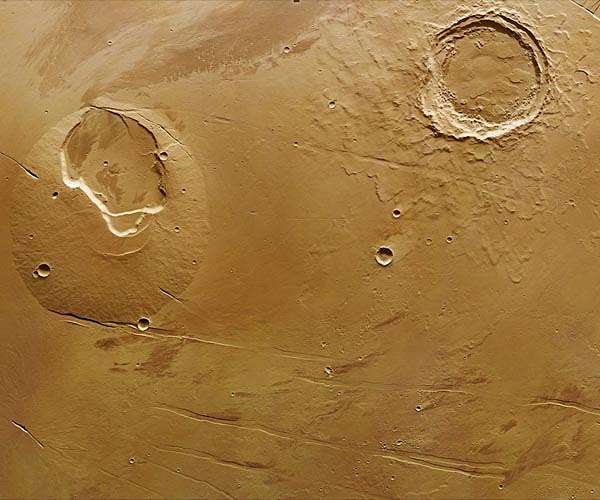 Volcanoes, impact craters, tectonic faults, river channels and a lava sea: a vast amount of information is captured in a relatively small area in this geologically rich new image from ESA’s Mars Express.

At first glance, two contrasting circular features jump out of this scene: a volcano that rises gently above the surface with a collapsed caldera system, and an impact crater that digs down below. Both features have different stories to tell.

Volcano in a lava sea
Lying in the shadows of the Solar System’s largest volcano, Olympus Mons, the much smaller Jovis Tholus shield volcano bears its own evidence of a long eruptive history.

Its complex caldera system comprises at least five craters. The largest is about 28 km wide, and sits off centre, as clearly seen in the plan view images. The calderas step down towards the southwest where the youngest eventually meets with the surrounding sea of even younger lava flows. The lavas create a shoreline around the flanks, obscuring the original relief of the volcano, which now only sits about 1 km above the surrounding plains.

On closer look, individual lava flows can be found all over the plains. These lava flows have also washed over fault lines, filling in the sets of parallel graben that dominate the north and north east parts of the scene in particular.

Graben are sunken valleys created when the planet’s crust stretches apart, such as under the pressure of volcanic and tectonic stresses in this region.

A steep scarp of one of these graben cuts right into the eastern flank of Jovis Tholus. Some portions of this graben can be traced for several kilometres further north, in some places more significantly filled in with lavas.

A hidden surprise lies close to the east of Jovis Tholus. Easily missed in the main plan view image, the colour-coded topography image gives it away: a less developed volcano subtly causes the surface to bulge.

Zooming in shows a fissure vent, from which less viscous lava flows than at Jovis Tholus once erupted, perhaps in a similar style to the activity seen in Iceland or Hawaii on Earth.

Making a splash
In contrast to the volcanic craters, a very different type of crater lies to the north of the region. This 30-km-wide impact crater was created when an asteroid or comet crashed into the surface, penetrating the layers below. Its fractured floor and the fluidised nature of the ejected material around the central crater – giving it the appearance of a flower with many layers of petals – points to the impactor striking a water- or ice-saturated ground.

More evidence of this region’s watery past lies to the northwest of the crater. Zooming in to the long fault line that truncates the top left of the plan view images are signs of an outflow channel. Water bursting out from here in the past formed streamlined islands and terraced channel walls.

Some much smaller channels can be found crosscutting the northern ejecta blanket of the large impact crater as well.

Massive amounts of water were likely purged from underground aquifers over time as a result of volcanic warming melting the ground ice, and as faulting took place, with the water taking the easiest way to the surface through the graben system.

Taken together, this single scene paints the picture of a fascinating and extremely active planetary history.

Mars Express has been orbiting the Red Planet since 2003, imaging Mars’ surface, mapping its minerals, identifying the composition and circulation of its tenuous atmosphere, probing beneath its crust, and exploring how phenomena such as the solar wind interacts in the martian environment.