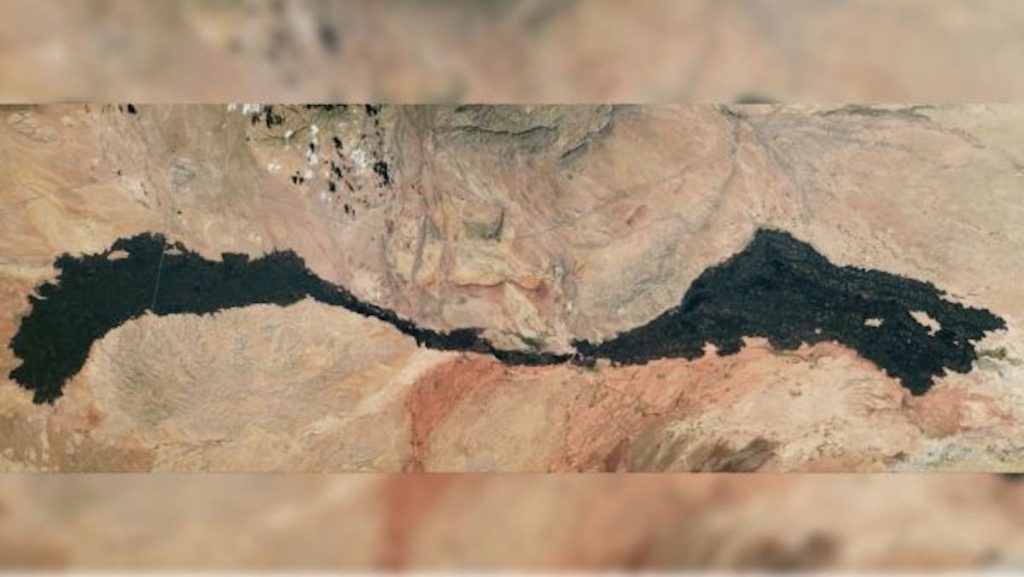 An astronaut on board the International Space Station (ISS) has snapped a stunning photo of an ancient lava flow stretching across the desert in New Mexico. From above, the frozen river of volcanic rock looks like a dark scar carved into the surrounding desert.

The basaltic lava flow, known as the Carrizozo Malpaís, covers around 130 square miles (337 square kilometers) and is around 50 miles (80 kilometers) long. It is located near Carrizozo, a city in the Chihuahuan Desert in New Mexico, and is one of the largest lava flows to have formed on Earth in the past 10,000 years, according to the U.S. Geological Survey (USGS) (opens in new tab).

The eruption that birthed the Carrizozo Malpaís began around 5,000 years ago and lasted for between 20 to 30 years. During that time, magma slowly trickled out of the ground from a subsurface shield volcano, which has since become dormant. Insulated lava tubes beneath the surface spread the molten rock out over an unusually large area, according to USGS.

The new image is a mosaic of four photographs taken on June 30 by an unidentified astronaut from the Expedition 67 crew on board the International Space Station. The stitched-together shot, which is one of the most detailed aerial images of the lava flow ever taken, was released online Sept. 26 by the NASA Earth Observatory (opens in new tab).

A majority of the lava in the image emerged from a small, 88-foot-tall (27 meters) vent, which locals have dubbed “little black peak,” located at the north end of the lava field (the left-hand side of the image). The vent sits in the middle of a zone of crustal weakness, known as the Capitan lineament, where magma easily rises through Earth’s crust and erupts on the surface, according to USGS.

The uneven, textured appearance of the frozen lava is the result of light scattering off fissures, collapses and depressions in the volcanic rock, according to Earth Observatory. A main road and railway also bisect the northern end of the lava field.

The ancient lava field may seem lifeless from above, but a number of desert plant species, such as prickly pear cactuses (Opuntia), perennial flowers, and juniper trees, can grow in the frozen magma, according to Earth Observatory.