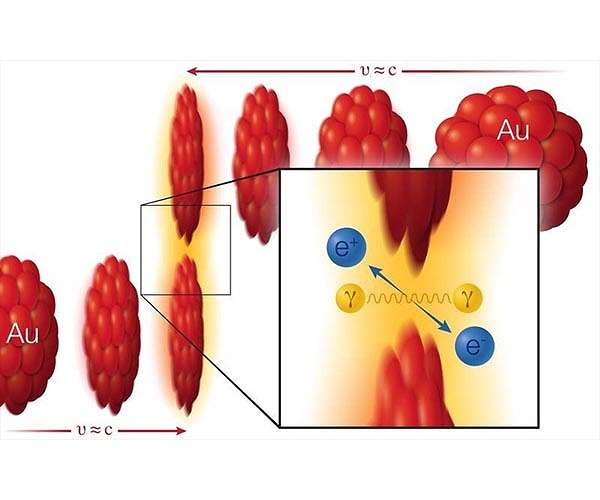 Nuclear scientists have used a powerful particle accelerator to create matter directly from collisions of light. Scientists predicted this process in the 1930s, but it has never been achieved in a single direct step.

The researchers accelerated two beams of gold ions to close to the speed of light in opposite directions. At such speeds, each gold ion is surrounded by particles of light (real photons) generated by the ion’s perpendicular magnetic and electric fields. When the ions graze past one another without colliding, the photons interact to produce electrons (matter) and positrons (antimatter).

The idea of creating matter from light stems from Einstein’s famous E=mc2 equation, which states that energy and matter (mass) are interchangeable. But using light energy to test this-and proving that the photons are real and long-lived, not “virtual” and short-lived-is challenging.

Even today’s most powerful lasers can’t directly produce matter. But new data show that photons surrounding ions at the Relativistic Heavy Ion Collider (RHIC) can. The momentum and angular distributions of the resulting electron-positron pairs indicate, within the high-precision limits of the experiment, that these particles come from real photons. This makes the experiment a direct demonstration of the Breit-Wheeler effect predicted in 1934.

In 1934, physicists Gregory Breit and John Wheeler predicted that collisions of photons could create matter and antimatter, and they even suggested doing so by accelerating heavy ions. RHIC, a DOE Office of Science user facility that accelerates heavy ions, turned out to be the ideal facility for testing their prediction.

Accelerating heavy ions such as gold generates a powerful magnetic field-like current flowing through a wire. At high speed, the spiraling magnetic and perpendicular electric fields are of equal strength-which is the definition of a photon, a quantized “particle” of light.

Researchers measured all available motion properties of the electron-positron pairs. By correlating the photons’ momentum, spatial location, and polarization with experimental observables, they found that the transverse distribution of photons was driven by the local electromagnetic field and not by quantum uncertainty.

The high-precision data were consistent with particles being generated by real photon interactions, rather than from virtual photons. The analysis provides solid evidence for the Breit-Wheeler effect.