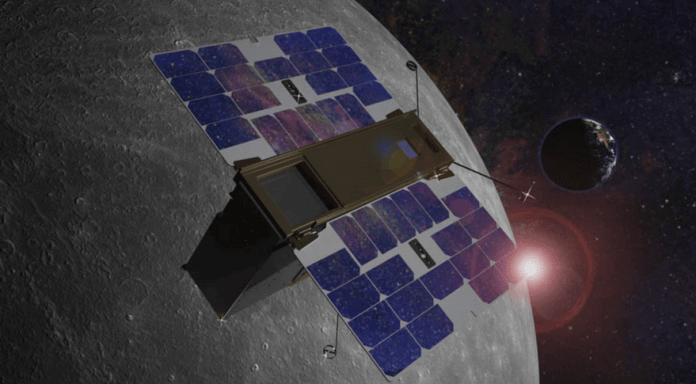 Traditionally, space agencies have communicated with lunar missions through very large satellite dish antennas. Since national space agencies and commercial firms are preparing to send spacecraft to the moon, KSAT is investing in a dedicated lunar communications network.

For the LunIR mission, KSAT will rely on 13-meter-diameter KSAT Max antennas rather than its smaller, KSATlite network. KSAT also is making sure the LunIR mission can schedule contact time and KSAT worked with Tyvak to make sure LunIR’s onboard radio was compatible with KSAT ground stations, KSAT CEO Rolf Skatteboe told SpaceNews by email.

LunIR is scheduled alongside the Orion capsule in April or May, and to deploy from the SLS rocket’s Orion stage adapter. Lockheed Martin developed LunIR’s infrared sensor and cryocooler to operate day and night, mapping the lunar surface, detecting materials and identifying potential landing sites.

Tyvak was in charge of the LunIR spacecraft, payload integration and mission assurance.

“Small satellites like LunIR are the most cost-effective way to learn more about the moon – and what challenges and opportunities it could pose for human habitation,” Marc Bell, Terran Orbital co-founder and CEO, said in a statement.

“Exploratory missions going to the moon and beyond are challenging, and we look forward to supporting LunIR on our network,” Arnulf Kjeldsen, KSAT executive vice president for strategy and technology, said in a statement. “We are continuously expanding our global network to meet the growing demand as more lunar missions are coming to fruition through the Artemis program and NASA´s Commercial Lunar Payload Services contracts.”

KSAT also is designing a ground network for lunar data relay satellites as part of a consortium led by Surrey Satellite Technology Ltd. working under the European Space Agency Moonlight Initiative, an effort to provide lunar communications and navigation.