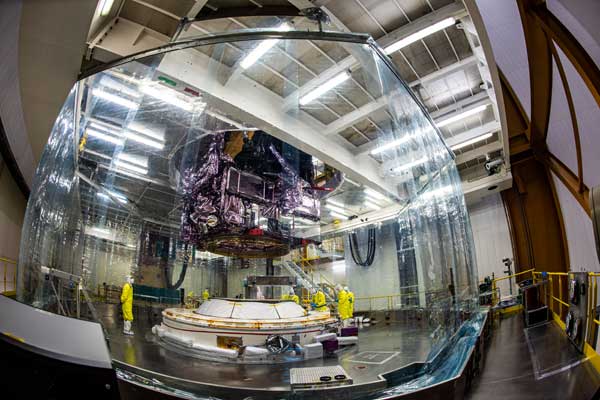 KOUROU, French Guiana (ESA PR) — On Saturday 11 December, the James Webb Space Telescope was placed on top of the Ariane 5 rocket that will launch it to space from Europe’s Spaceport in French Guiana.

After its arrival in the final assembly building, Webb was lifted slowly about 40 m high and then carefully manoeuvred on top of Ariane 5, after which technicians bolted Webb’s launch vehicle adapter down to the rocket.

This whole process was performed under strict safety and cleanliness regulations, as it was one of the most delicate operations during the entire launch campaign for Webb.

A ‘shower curtain’ about 12 m high and 8 m in diameter was installed in between two platforms, to create a closed-off space around Webb to avoid any contamination.

The next step is to encapsulate Webb inside Ariane 5’s specially adapted fairing.

Webb will be the largest, most powerful telescope ever launched into space. As part of an international collaboration agreement, ESA is providing the telescope’s launch service using the Ariane 5 launch vehicle. Working with partners, ESA was responsible for the development and qualification of Ariane 5 adaptations for the Webb mission and for the procurement of the launch service by Arianespace.

Webb is an international partnership between NASA, ESA and the Canadian Space Agency (CSA).

Find out more about Webb in ESA’s launch kit and interactive brochure.