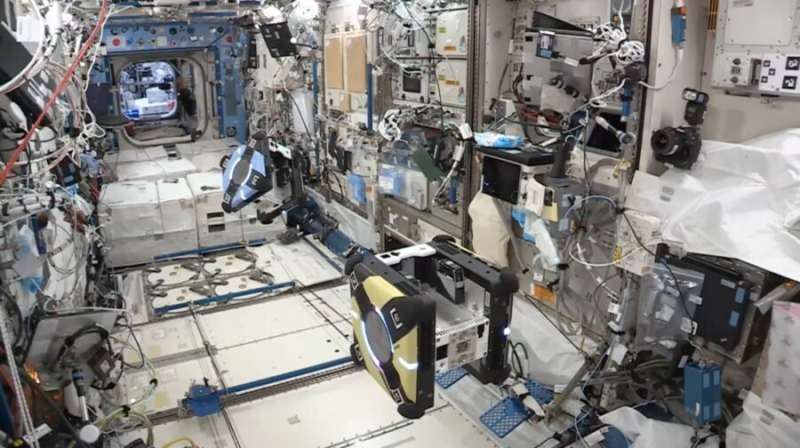 In 2002, the European Space Agency launched Envisat, the largest civilian satellite (at the time) to go to low Earth orbit (LEO). For a decade, it observed our planet and sent back valuable data on Earth’s climate, tracking the decline of Arctic sea ice and more, until it went dark in 2012. One of the prevailing theories for its demise is that it simply ran out of fuel. As LEO becomes more crowded, Envisat is a school bus-sized example of a growing area of concern in the space domain: orbital debris and the ever-increasing risk of disrupting active satellite missions that would yield outcomes ranging from inconvenient to catastrophic for modern society.

But how do you catch up to an uncooperative object tumbling through space faster than a speeding bullet? An international research collaboration between MIT and the German Space Agency (DLR) completed a series of experiments aboard the International Space Station (ISS) that illuminated a possible path forward to help address this question.

“If we could refuel or repair these tumbling bodies that are otherwise functional, it would be really useful for orbital debris reduction, as long as we can catch up to it. But a close-proximity rendezvous is hard to do if you don’t know exactly how your target is moving,” says Keenan Albee SM ’19, a Ph.D. candidate in aeronautics and astronautics who helped lead the project. “We’ve assembled a set of algorithms that figures out how the target is tumbling, and then along with other tools that allow us to account for uncertainty, we can produce a plan to get us to the target, despite the tumble.”

To test their algorithms in microgravity, the team used NASA’s Astrobee robots aboard the ISS as their test bed. Astrobee is a team of three cube-shaped robots that help astronauts perform routine tasks either autonomously or by remote control, such as taking inventory, documenting experiments, or moving cargo, using their electric fan propulsion system as well as their built-in cameras and sensors to move about the station and perform their tasks. The first round of microgravity experiments aboard the ISS in June 2021 tested this set of algorithms both individually and together to enable a successful autonomous rendezvous of a “Chaser” Astrobee robot with a tumbling “Target” Astrobee, which were improved upon and tested again in a successful second session in February 2022.

First, the MIT and DLR research teams identified a series of algorithms, including simultaneous localization and mapping (SLAM), system identification, online motion planning, and model predictive control to test on Astrobee’s autonomous robots and software platform to enable autonomous rendezvous. Then, they worked to develop the software and hardware required to experiment on the Astrobee platform. Astrobee’s open-source flight software, developed by NASA Ames, was augmented with MIT’s testing interface, the Astrobee Science Application Package, to enable low-level autonomy experiments. The TumbleDock/ROAM project was the first of a series of research collaborations out of the SSL/ARCLab to use this interface for algorithm testing on-orbit.

Working in a control room from MIT’s campus, the team commanded the first round of microgravity testing with Astrobee. One Astrobee served as the “Chaser,” with the goal of performing an autonomous rendezvous with another Astrobee acting as the tumbling “Target.” Using data from Astrobee’s cameras, lidar sensors, and onboard inertial measurement unit, the observing Chaser developed a model of the tumbling Target’s motion and inertial properties, which then informed a nonlinear programming-based trajectory optimization to reach a “mating point,” fixed in the rotating Target’s frame. This trajectory was then tracked using robust model predictive control. The result: a successful rendezvous.

“I think it’s so important for young roboticists and engineers to actually get their hands dirty on a physical system because you see the actual interactions between bodies in the field and gain a new understanding on parameters you may not have thought were important, but require copious amounts of tuning,” says Specht. “Working out the math and simulating it is one thing, but actually putting it on a real system and seeing how that works in the real world is a completely different experience, and it opens your mind to so many different possibilities.”

After the first test session, the TumbleDock/ROAM team worked closely with both NASA and DLR to make further improvements to their system. DLR developed enhancements to Astrobee’s default localization system that complemented additional upgrades created by the team at NASA Ames, with MIT continuing work on system integration and other algorithm overhauls. The final test session in February 2022 put these improvements in estimating the Target’s orientation, safely tracking the motion plan to the Target with robustness guarantees, and working with Astrobee’s maturing localization system to the test, yielding a number of successful rendezvous maneuvers with differing motion plans.

“Because Astrobee is such a new system, we’ve had a lot more opportunity to collaborate more closely with the engineers from NASA Ames throughout the entire process than we would have otherwise,” says Oestreich. “We’ve had some unique use cases for their system, so it’s been an interesting challenge to work through together and get everyone in the same loop.”

Working closely together on this project has also yielded benefits for the agency. NASA used portions of data from their project to improve the Astrobee base localization system and have also incorporated changes into the flight code software, providing crucial inputs to the autonomous rendezvous pipeline that will continue to benefit all future Astrobee users.

NASA’s Astrobee robot system is preceded by SPHERES (Synchronized Position Hold, Engage, Reorient Experimental Satellites), small programmable probes first conceived of by MIT undergraduates and further developed by MIT SSL. The SPHERES satellites launched in 2006 and were operated by SSL and NASA under professors David Miller and Alvar Saenz-Otero until Dec. 31, 2019, when Astrobee took over as the sole microgravity robotics test bed aboard the ISS. ROAM, or Relative Operations for Autonomous Maneuvers, became the umbrella for SSL research projects that focused on developing systems to support satellite proximity operations and is part of the namesake of the TumbleDock/ROAM project team.

“Our project achieved multiple on-orbit firsts both for MIT and for Astrobee, which is really exciting,” says Albee. “We were the first Astrobee payload to perform simultaneous complex control of multiple robots and the first to perform low-level planning and control autonomy research using the Astrobee system. It was also the first time the SSL commanded an ISS payload directly and in real time from MIT’s campus.”

In addition to building the systems, the research teams at MIT and DLR collaborated on operations, experiments, and testing, leveraging the work done previously in SPHERES to enable this new application with Astrobee. When Lampariello first met David Miller, the Jerome C. Hunsaker Professor and former director of the SSL at MIT, he proposed a research project to test his motion planning software for tumbling targets on the SPHERES system. This initial collaboration eventually led to the TumbleDock/ROAM project on Astrobee.

“This project brings together the work my lab has done in motion planning and the work in perception that MIT has developed. Together, we all worked to develop the controls required to test the hardware,” says Lampariello. “By the time we ran the tests aboard the ISS, we had a whole pipeline of functionalities—perception, motion prediction, planning, and control—to demonstrate on the Astrobee platform.”

According to Oestreich, the TumbleDock/ROAM project not only builds on a foundation of knowledge and collaboration from SPHERES, but also on a legacy of generations of graduate work in SSL that came before them.

“The SLAM and target estimation algorithms, which help with the initial stage of finding out how the target is tumbling, were developed by graduate students in SSL and have been handed down through generations of us now,” says Oestreich. “It’s been interesting to see how it has evolved over the past eight years from thesis to thesis as each person worked to advance its capabilities further, and it has been cool to be able to implement it on new hardware like Astrobee.”

In the process of building and refining their Astrobee experiment, they found the interface they developed could be adapted and repurposed for other investigations. Looking ahead, the TumbleDock/ROAM team hopes to make Astrobee as useful for other researchers as SPHERES was for them. The team has already run another set of experiments, RElative Satellite sWArming and Robotic Maneuvering (ReSWARM), in collaboration with KTH Space Center in Sweden and IST at the University of Lisbon in Portugal. The ReSWARM experiments successfully demonstrated a variety of algorithms related to on-orbit assembly and servicing, including information-aware motion planning and distributed model predictive control of microgravity robot teams. While MIT is currently one of the most prolific users of the Astrobee platform, the project team plans to continue refining their work with the goal to make testing resources open source for other researchers at MIT and beyond.