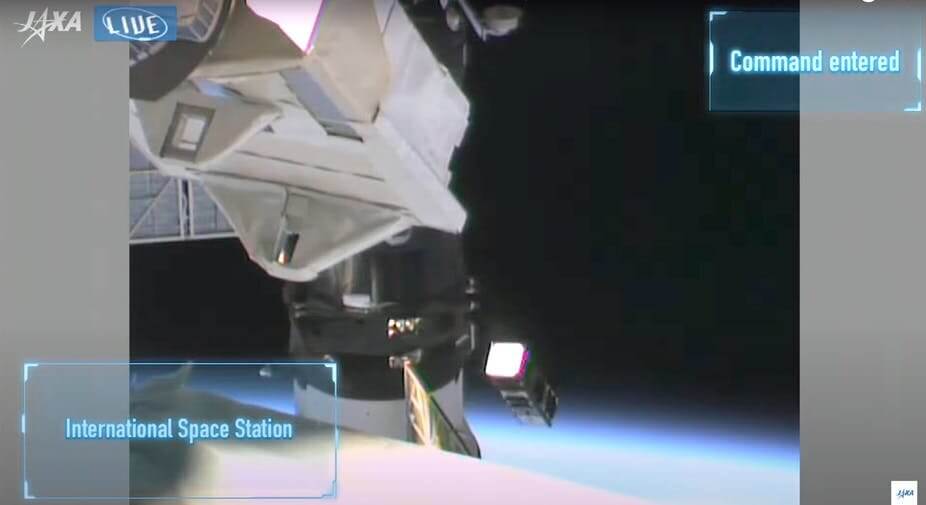 The Australian-made space weather satellite CUAVA-1 was deployed into orbit from the International Space Station on Wednesday night. Launched to the space station in August aboard a SpaceX rocket, a major focus of this shoebox-sized CubeSat is to study what radiation from the Sun does to Earth’s atmosphere and electronic devices.

Space weather such as solar flares and changes in the solar wind affects Earth’s ionosphere (a layer of charged particles in the upper atmosphere). This in turn has an impact on long-distance radio communications and the orbits of some satellites, as well as creating fluctuations in the electromagnetic field that can wreak havoc with electronics in space and down to the ground.

The new satellite is the first designed and built by the Australian Research Council Training Centre for Cubesats, UAVs, and their Applications (or CUAVA for short). It carries payloads and technology demonstrators built by collaborators from the University of Sydney, Macquarie University, and UNSW-Sydney.

One of CUAVA-1’s aims is to help improve space weather forecasts, which are currently very limited. As well as its scientific mission, CUAVA-1 also represents a step towards the Australian Space Agency’s goal of growing the local space industry by 20,000 jobs by 2030.

While the Australian Space Agency was only formed in 2018, Australia has a long history in satellite research. In 2002, for example, FedSat was one of the first satellites in the world to carry a GPS receiver onboard.

Space-based GPS receivers today make it possible to routinely measure the atmosphere all around the world for weather monitoring and prediction. The Bureau of Meteorology and other weather forecasting agencies rely on space-based GPS data in their forecasting.

The ionosphere is the location of the beautiful auroral displays that are common at high latitudes during moderate geomagnetic storms, or “bad space weather,” but there is much more to it.

The ionosphere can cause difficulties for satellite positioning and navigation, but it is also sometimes useful, such as when ground-based radar and radio signals can be bounced off it to scan or communicate over the horizon.

Why space weather is so hard to predict

Understanding the ionosphere is an important part of operational space weather forecasting. We know the ionosphere becomes highly irregular during severe geomagnetic storms. It disrupts radio signals that pass through it, and creates surges of electric current in power grids and pipelines.

During severe geomagnetic storms, a large amount of energy is dumped into the Earth’s upper atmosphere near the north and south poles, while also changing currents and flows in the equatorial ionosphere.

This energy dissipates through the system, causing widespread changes throughout the upper atmosphere and altering high-altitude wind patterns above the equator hours later.

In contrast, X-rays and UV radiation from solar flares directly heat the atmosphere (above the ozone layer) above the equator and middle latitudes. These changes influence the amount of drag experienced in low-Earth orbit, making it difficult to predict the paths of satellites and space debris.

What is space weather?

Even outside geomagnetic storms, there are “quiet-time” disturbances that affect GPS and other electronic systems.

At present, we can’t make accurate predictions of bad space weather beyond about three days ahead. And the flow-on effects of bad space weather on the Earth’s upper atmosphere, including GPS and communication disturbances and changes in satellite drag, are even harder to forecast ahead of time.

As a result, most space weather prediction agencies are restricted to “nowcasting”: observing the current state of space weather and projecting for the next few hours.

It will take a lot more science to understand the connection between the Sun and the Earth, how energy from the Sun dissipates through the Earth system, and how these system changes influence the technology we increasingly rely on for everyday life.

This means more research and more satellites, especially for the equatorial to mid-latitudes relevant to Australians (and indeed most people on Earth). We hope CUAVA-1 is a step towards a constellation of Australian space weather satellites that will play a key role in future space weather forecasting.