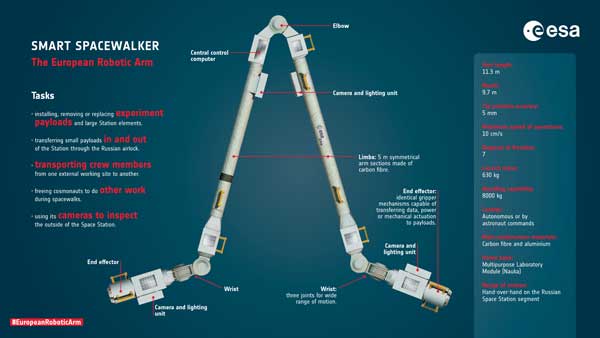 BAIKONUR COSMODROME, Kazakhstan (ESA PR) — The European Robotic Arm (ERA) is set for launch on a Proton rocket to the International Space Station on 21 July at 16:58 CEST. The first robot that can ‘walk’ around the Russian part of the orbital complex will be launched with the new Russian Multipurpose Laboratory Module from the Baikonur Cosmodrome, in Kazakhstan.

The latest robot to service the Space Station has a length of over 11 m, and can anchor itself to the Russian segment in multiple locations, moving backwards and forwards with a large range of motion.

Much like a human arm, ERA has an elbow, shoulders and even wrists. At full extension it could pick up a football from the penalty spot of a soccer pitch and pass it to the goalkeeper.

Astronauts will find in the European Robotic Arm a most valuable ally – it will save them precious time to do other work in space.

The crew in space can control ERA from both inside and outside the Space Station, a feature that no other robotic arm has offered before. The robotic arm can perform many tasks automatically, and it can be controlled directly or programmed in advance to carry out tasks.

ERA will transfer payloads from inside to outside the International Space Station, but it will also help spacewalkers by transporting them at the at the end of the arm.

About a week after the launch, ESA astronaut Thomas Pesquet will welcome the arrival of the European Robotic Arm to the Space Station. Thomas will be involved in setting up the arm from the Russian segment.

It will take five spacewalks to get the robotic arm fit for space operations. ESA astronauts Matthias Maurer and Samantha Cristoforetti will support the installation both from inside and outside the Station by taking part in a few spacewalks.

ERA’s first tasks in orbit are to set up the airlock and install a large radiator for the Multipurpose Laboratory Module, also called ‘Nauka’.

The International Space Station already has two robotic arms: Canadarm2 and the Japanese Experiment Module Remote Manipulator System. Both play a crucial role in berthing visiting vehicles and moving external payloads on the US and Japanese modules.

However, the Canadian and Japanese arms cannot reach the Russian segment of the Station, that uses different mounting systems for robotic arms and equipment.

The European Robotic Arm will provide the freedom to move hand-over-hand around the Russian parts of the Station from its home base, the Multipurpose Laboratory Module.

A story of perseverance

The launch of the Multipurpose Laboratory Module was initially planned for 2007, but it has been repeatedly delayed since then.

The story of the European Robotic Arm is one of perseverance. Having spent 14 years waiting for its launch, the team had to keep the hardware and software up to date and in good shape.

“Every piece of ERA has undergone a rigorous analysis to confirm that it is fit for space after its prolonged shelf-life on Earth,” explains Philippe Schoonejans, ERA project manager.

After two decades of technical and programmatic challenges, European industry and know-how will be strengthened. “During ERA’s operational life the robot will help demonstrate equipment and technologies key to future space adventures, such as the robotic transfer of samples on Mars,” says ESA Director of Human and Robotic Exploration David Parker.

ERA is 100% made-in-Europe. A consortium of European companies led by Airbus Defence and Space Netherlands designed and assembled it for ESA.

Proton on the launch pad with the Nauka module. (Credit: Roscosmos)

The launch can be followed live from 15:30 CEST (14:30 BST) on 21 July with ESA Web TV broadcasting on its two channels Roscosmos and NASA coverage from the Baikonur Cosmodrome, in Kazakhstan.

To get up to speed, read the European Robotic Arm brochure online in English,  Dutch or Russian.

Catch up with ESA astronaut André Kuipers and ERA project manager Philippe Schoonejans to learn more about this dexterous 11-m-long robot in the latest podcast series of ESA Explores.