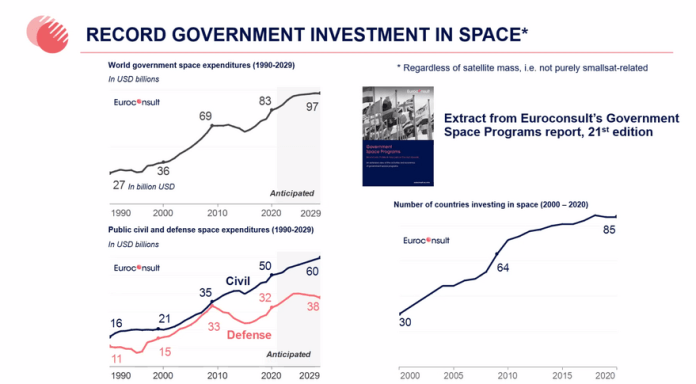 The pandemic presented challenges for startups grappling with facility closures and production disruptions, but industry leaders tended to fare well.

Early in the pandemic, Najjar who edits Euroconsult’s annual report on the small satellite market, was concerned that governments would turn away from space initiatives to address healthcare and other concerns. He also worried the pandemic would slow progress at startups, postponing revenue generation.

Instead, governments around the world continued to increase spending on space initiatives.

“Worldwide, the space expenditures of governments are steadily increasing and are expected to keep increasing over the next few years, both on the civilian side and on the defense and military side,” Najjar said.

Governments funding accounts for more than half of the $54 billion smallsat market Euroconsult forecasts over the next 10 years.

At the same time, private investment in the space sector is soaring.

“As of June of 2021, we have already surpassed the 2020 level of investments, which was already a record year,” Najjar said. “We are already breaking records, despite the pandemic, which is quite surprising.”

In recent months, space companies also have announced “a higher-than-average number of funding rounds that are in the hundreds of millions,” Najjar said.

“They are not the only ones and we do not see any sign of slowdown yet,” Najjar said.

“SPACs are now clearly redefining the fundraising landscape,” Najjar said. “I would say 90 percent of the recent SPACs do concern smallsats, or smallsat-related companies, enabling again some rounds in the hundreds of millions.”

While unexpected, this trend offers startups a way to raise significant funding to design, develop, manufacture and launch hardware before they begin to generate revenue, Najjar said.

He warned, though, that investors should be wary of some of the revenue predictions that were published recently for many SPACS calling them “very overly optimistic” with future revenue projections “in the billions and billions of dollars.”

“Most have to be taken with a pinch of salt,” Najjar said. “Beware and actually dig into the business models and see what they can do.”