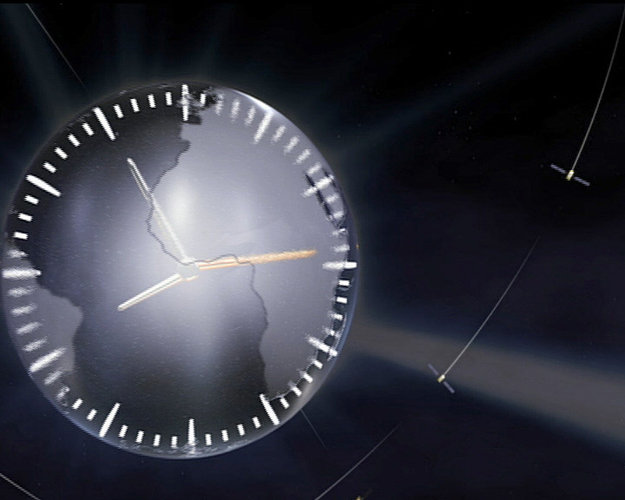 Since November 2021, ESA’s satellites and ground stations have been running on a newly defined, incredibly precise “ESOC time”. Measured by two atomic clocks in the basement of the ESOC mission control centre in Germany, this new time determination will bring wide-reaching operational benefits for all ESA missions, making new feats possible in space while adding to our global definition of ‘now’.

“Correct to how many decimal places?” ESA mission control replies. “Our atomic clocks are now accurate to within 5 nanoseconds, with respect to Coordinated Universal Time (UTC).”

You walk away, perhaps slightly irritated. Why on Earth would anyone need to know the time to within a few billionths of a second? Well, if you’ve ever travelled by car, used online banking, a mobile phone, or watched TV, you’ve likely reaped the rewards of atomic timekeeping.

As Einstein discovered, time is relative; the time on a clock depends on how fast it is moving or how far it is from a massive body, such as its altitude above the surface of Earth. As such, clocks on the top of a mountain read slightly differently to those at the bottom of the ocean, and remarkably one twin speeding through space ages at a different rate to their initially identical sibling on Earth.

Because of this, it is in fact impossible to know the exact time ‘right now’ anywhere other than your precise location. Comparing clocks at two different locations takes time: imagine asking a Martian for the time on the Red Planet – it will take about 14 minutes for your message to arrive and the same again to get their response. By the time you receive their message, it’s out of date.

This may not have mattered centuries ago, but our modern world relies on a shared conception of the present moment. Enter, “paper time”.

Before trains, different local regions defined their own, independent time defined by the movement of the Sun.

As people began speeding from one location to another, a coordinated time was needed so that train drivers wouldn’t need to continuously update their clocks as they passed from region to region, and passengers knew the time when they arrived at their destination. This led to the creation of ‘Greenwich Mean Time’ in 1884, the mean solar time counted from midnight by the Royal Observatory in Greenwich.

By the mid-20th century, atomic clocks revealed that melting ice sheets, earthquakes and the natural motions in Earth’s crust, oceans and atmosphere create day-to-day variations in the time it takes for Earth to spin on its axis. In 1967, Coordinated Universal Time (UTC) was adopted, incorporating measurements of Earth’s rotation with averaged readings from around 400 extremely precise, local, atomic clocks around the world.

“About 90 ‘time laboratories’ around the world generate local realisations of UTC, which are monitored continuously,” explains Erik Schoenemann, Navigation Engineer at ESOC and responsible Project Manager.

“On a monthly basis, the International Bureau of Weights and Measures just outside Paris, processes the results issued by all those laboratories to retrospectively calculate a weighted average steered to the definition of the SI second and adjusted every now and then with the addition of ‘leap seconds’ to correct for the rotation of the Earth, UTC. This combined time is defined as a paper clock as it only exists in theory, and can only be discovered after-the-fact, with a lag of about six weeks.”

Since 2012, ESA’s ESTEC technical centre in the Netherlands has contributed to UTC with its atomic clocks located in Noordwijk, the Netherlands. Now, the Agency’s ESOC mission control centre is officially adding its measurements to the mix, with the combined measurements from the two sites being dubbed “UTC(ESA)”.

“The time previously provided by ESTEC was under laboratory conditions and not used by our ground stations or missions. The main difference now is that we generate an ‘operational time’, ready to use immediately for all missions, without interruption,” explains Werner Enderle, Head of ESA’s Navigation Support Office at ESOC.

“ESOC time will have a significant influence on our abilities. Providing a direct link to UTC for all our missions will allow for significant new features and developments which weren’t previously possible,” adds Sinda Mejri, frequency and timing expert at ESOC.

“This really will make a big difference, and it’s all down to the brilliant work and collaboration between teams at ESOC, ESTEC and our ground stations.”

Time is of the essence

Time itself is considered part of the critical infrastructure in many countries, or at least having access to a precise, reference time.

This universal time is used for weather forecasting, by pilots flying through different time zones, spacecraft operators flying missions in space, as well as much of the vital infrastructure that underpins our economies and societies from the stock exchange to the internet.

ESA missions will also benefit, from the Agency’s fleet of Earth observation satellites to orbiting observatories like Gaia, deep-space missions like Solar Orbiter and in particular, future missions to the Moon.

In fact, lunar operations will depend on interoperable GNSS time – precise, lunar access to an agreed ‘now’, allowing for multi-mission, multi-user operations on and around the Moon. ESA has recently been charged by the International Committee on Global Navigation Satellite Systems with proposing potential concepts for such an interoperable GNSS time, which could also be used for lunar missions. The recent UTC determination at ESOC is a fundamental step towards the goal.

Not only does ‘ESA time’ help improve the accuracy of UTC worldwide, but it means all the Agency’s missions, now and in the future, home and away, will benefit from an immediate, precise answer to the seemingly simple question, “what time is it?”