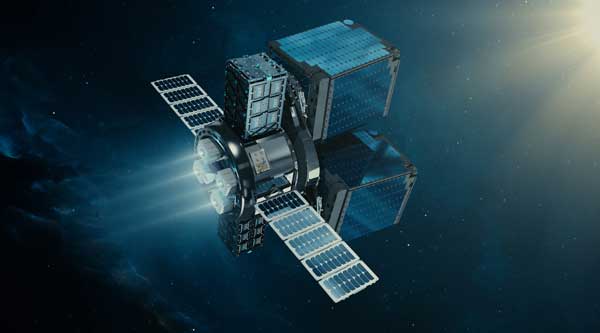 SOFIA, Bulgaria/BERLIN, Germany, October 04, 2021 (EnduroSat/Exolaunch PR) – EnduroSat,  provider of software-defined NanoSats and Space Services for business and academia, and Exolaunch, the industry-leading provider of launch, integration, deployment and mission management services for small satellites, today announced the signing of launch agreements for sending two EnduroSat NanoSats into orbit aboard SpaceX’s Falcon 9. The 6U XL SharedSat nanosatellites, built by EnduroSat for its customers, will be launched via Exolaunch in H1 2022 as part of SpaceX’s SmallSat Rideshare Program.

The SharedSats are 6U XL NanoSats with several multi-purpose payloads on a single bus.  By simplifying access to space services through shared missions for a range of commercial, exploration and science customers, EnduroSat aims to significantly lower the entry barrier of operations in orbit.

The two SharedSats are part of the commercial EnduroSat’s Missions. They foresee integration, validation, and testing, launch and operations of the satellite and hosted payloads. Direct access to the payload data will be made available in the cloud through EnduroSat’s Digital Mission Control. The software-centric NanoSat architecture allows for multiple payloads to operate together reliably on a single platform with access to on-demand processing, power and pointing capability.

“We’re really pleased to have signed a launch agreement with Exolaunch, as it is another step in our mission to provide easy access to space. The Shared Satellite Service goal is to help drive innovation at the final frontier for visionary entrepreneurs, scientists, and technologists. At EnduroSat, we are eager to see the innovations that our customers will accomplish in space and are happy to support them every step of the way,” said EnduroSat’s Founder & CEO Raycho Raychev.

Exolaunch will ensure comprehensive rideshare mission management, satellite integration and deployment services for both EnduroSat missions. The launches are arranged by Exolaunch under its Multi-Launch Agreement with SpaceX.

“We’re proud to support EnduroSat with a variety of launch options and flexible mission management to address all their ongoing launch needs for the Shared Satellite Service program. Exolaunch has acquired outstanding flight heritage with Falcon 9 after signing a multi-launch agreement with SpaceX and is pleased to become a trusted launch partner for EnduroSat,” said Jeanne Medvedeva, VP of Launch Services at Exolaunch. “It’s our common vision to make space accessible for everyone and we are honored to contribute to EnduroSat’s mission.”

For both missions Exolaunch will use its proprietary deployment  technologies – the EXOpod, a next-gen cubesat deployer with half a decade and 100+ of released satellites flight heritage, to flawlessly deploy the EnduroSat’s satellites into their target sun-synchronous orbit above 500 km and the EXOport, a flexible multi-satellite adapter designed to optimally accommodate several satellites on a single Falcon 9 port.

The new launch agreements mark the expansion of EnduroSat’s Shared Satellite Service and pave the way to the continued cooperation between the companies on future launches.

Exolaunch (Germany, USA) is a global leader in rideshare launch, deployment, in-space transportation, and integration services for the New Space industry. With a decade of flight heritage and 170 satellites launched on 13 missions across world known launch vehicles, Exolaunch has an industry insight it can leverage to develop one-stop-shop solutions tailored towards meeting customer needs and addressing market trends. Exolaunch executes launch contracts for the New Space leaders, the world’s most innovative startups, research institutions, government organizations, and space agencies. The company manufactures lightweight and flight-proven separation systems to deliver the best-in-class integration and deployment services for small satellites. Exolaunch is also developing a line of environmentally-friendly orbital transfer vehicles named Reliant for the satellite last-mile delivery, phasing and space debris removal. Exolaunch is committed to making space accessible for everyone and to promoting safe, sustainable and responsible use of space.