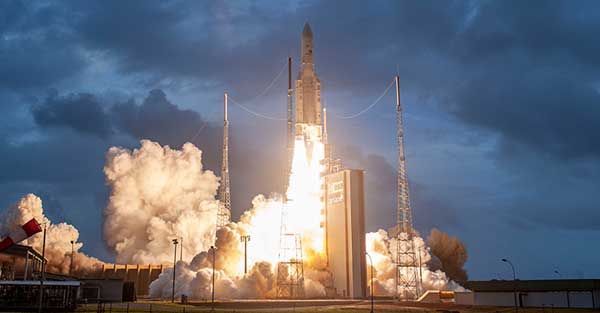 The NewSpace India Limited (NSIL), a Government of India company under Department of Space (DOS), has chosen Arianespace to launch its GSAT-24 telecommunications satellite.

The satellite will be placed into orbit during an Ariane 5 mission scheduled for the 1st quarter of 2022.

GSAT-24 will be the 25th Indian satellite orbited by Arianespace, highlighting an outstanding partnership.

ÉVRY-COURCOURONNES, France (Arianespace PR) — On September 28, 2021, NewSpace India Limited (NSIL) entrusted Arianespace with the launch of its GSAT-24 telecommunications satellite. GSAT-24 is scheduled for launch in the 1st quarter of 2022, from the Guiana Space Center, Europe’s Spaceport in Kourou, French Guiana, on one of the seven Ariane 5 missions remaining to be performed with the heavy-lift launcher.

This Ku-band satellite is a 4-ton class communications satellite built by the Indian Space Research Organization (ISRO) and will be placed into Geostationary Transfer Orbit (GTO). Once orbited, GSAT-24 will provide high-quality television, telecommunications and broadcasting services. GSAT-24 satellite is the “1st Demand Driven communication satellite mission” undertaken by NSIL.

“We are delighted that NSIL, for the first time since its creation in March 2019, has entrusted Ariane 5 with a new GTO satellite to deliver,” declared Stéphane Israël, CEO of Arianespace. “This contract is a new milestone in the long-time partnership linking Arianespace to India and its space agency ISRO that began in 1981 with our first joint success: APPLE satellite, launched on an Ariane 1. We proudly performed 24 launches for India, continuously and successfully supporting its institutions, businesses and population’s needs. We are thrilled to see this upcoming launch consolidate our relationship, which is a two-way street, with Indian launchers having orbited European satellites.”

NSIL, incorporated during March 2019, is a Central Public Sector Enterprise (CPSE), under Department of Space (DOS) and is the commercial arm of ISRO. As part of “Space Reforms” announced by Government of India during June 2020, NSIL got mandated to undertake operational satellite missions on a “Demand Driven” model, wherein NSIL has the responsibility to build, launch, own & operate the satellite and provide services to its committed customer.

Arianespace uses space to make life better on Earth by providing launch services for all types of satellites into all orbits. It has orbited more than 1,000 satellites since 1980, using its family of three launchers, Ariane, Soyuz and Vega, from launch sites in French Guiana (South America); Baikonur, Kazakhstan; and Vostochny Cosmodrome in Russia. Arianespace is headquartered in Evry, near Paris, and has a technical facility at the Guiana Space Center, Europe’s Spaceport in French Guiana, plus local offices in Washington, D.C., Tokyo and Singapore. Arianespace is a subsidiary of ArianeGroup, which holds 74% of its share capital, with the balance held by 15 other shareholders from the European launcher industry.