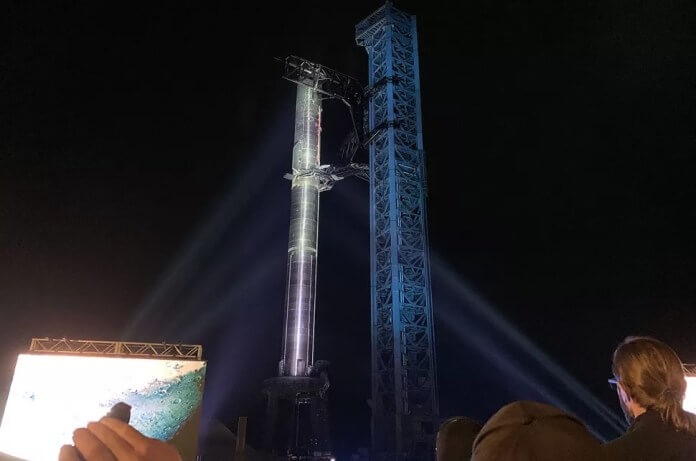 STARBASE, Boca Chica, TX — “It is hard to believe it is real, except, you know… it is right there.”

Elon Musk took to the stage here on Thursday night (Feb. 10) to deliver what his company, SpaceX, billed as an “update on the design, development and testing of Starship” — the “it” to which Musk was referring and of what he further described as “really some some wild stuff.” Towering behind him at SpaceX’s South Texas Launch Site (or “Starbase”) was the first fully-stacked Starship, comprising a prototype spacecraft of the same name mounted atop a mockup of its even taller “Super Heavy” booster.

The steel-skinned vehicle, which glistened in the spotlights that were illuminating it against the night sky, was itself poised atop its launch pad as if ready for flight.

“This tower, from design to construction, took 13 months,” said Musk, referring to the launch and “catch” gantry tower standing beside the Starship. Just a night before, the tower’s arms were used to pinch the spacecraft like a pair of chopsticks and then raise it above and down onto the booster.

Musk said he had even more grandiose plans for the tower when the Super Heavy returns from launching a Starship into space.

“We’re aiming for rapid reusability, which is why the booster is going to take off and then fly back to the launch tower and aspirationally, land on the arms, which does sound insane,” Musk said, explaining the “catch” part of the launch and catch tower. “If it does come in too fast and shear off the arms, then I guess it will be ‘a farewell to arms.’”

SpaceX’s ability to use the tower where it stands hinges on the Federal Aviation Administration (FAA) giving its approval after a recent environmental assessment of how Starship launches would effect the surrounding area, including the populated Boca Chica beach community and the surrounding Brownsville township. If the FAA requires a more stringent environment review, Musk said SpaceX might have to move operations to Florida and NASA’s Launch Complex 39A at the Kennedy Space Center, where the FAA has already signed off on its use.

“Our worst case scenario is that we would be deployed by six to eight months to build up the Cape [Canaveral] launch tower and launch from there,” he said.

If, on the other hand, the FAA provides its approval in the next several weeks, Musk said that the first Starship bound for Earth orbit could soon be ready to fly.

“I think we’re close to having the hardware ready to go,” Musk said. “Right now, we’re tracking to have the regulatory approval and hardware readiness around the same time. Hopefully, in a couple of months for both.”

Musk’s presentation stayed to close to a similar media event that SpaceX held in 2019, where he showed off the first Starship mockup. Few new details were shared, with the exception of his delving a bit further into the Starship’s capability to be refilled (refueled) in orbit and his describing the upgrades made for a new version of the rocket’s Raptor engines, of which there are 33 on the booster and nine on the Starship. The new “version two” (V2) Raptor streamlines the design.

“The V1 kind of looks like a Christmas tree spaghetti pile — a lot of ‘fibbly’ bits. V2 is greatly simplified while also increasing thrust at the same time,” Musk said.

Starship is being built, Musk said, to meet a number of purposes, including, ultimately enabling humanity to become a multi-planet species. In the nearer term, the company plans missions in Earth orbit and to the moon, the latter as NASA’s chosen vehicle to land the next U.S. astronauts on the lunar surface.

“I don’t think there is really a conflict there. We’re going to be making a lot of ships, a lot of boosters — obviously a lot of engines,” he said. “Adding legs to land on the moon, that can be done pretty quickly, so I don’t really see any conflict between achieving rapid reusability and getting to the moon.”