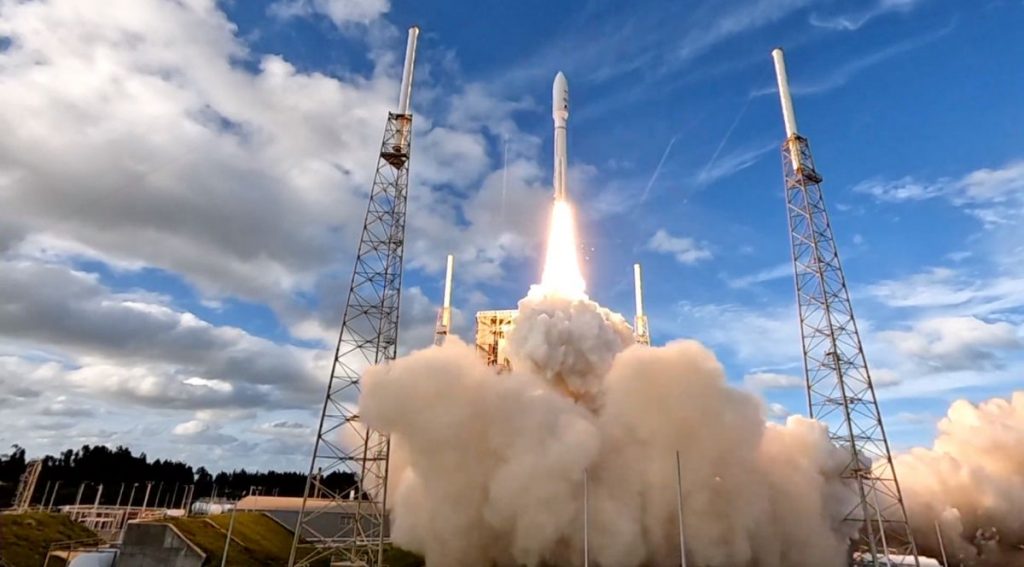 The 196-foot-tall (60 meters) rocket hit all of its marks early. It jettisoned its three solid rocket boosters about 2 minutes after liftoff as planned, for example, and discarded its payload fairing, which protected the two satellites during launch, about 1.5 minutes later. And the Atlas V’s two stages separated at about T+4.5 minutes.

Related: The history of rockets

But there’s quite a bit of work left to do, for the rocket’s Centaur upper stage still needs to power itself to the deployment destinations for SES-20 and SES-21 — near-circular, near-geosynchronous orbits high above Earth.

If all goes according to plan, SES-20 will be deployed about 5 hours and 40 minutes after liftoff, and SES-21 will follow suit roughly 40 minutes later. The two spacecraft will then use their onboard propulsion systems to circularize their orbits, which will send them zooming around Earth about 22,300 miles (35,900 kilometers) above the equator, according to a ULA mission description (opens in new tab).

Once the satellites are established in those orbits and have been through a checkout period, SES-20 and SES-21 can begin doing what they were built to do — provide television broadcasting service across the United States for the Luxembourg telecom company SES.

“Built by Boeing with thousands of narrow and steerable beams and the ability to isolate interference sources, the two spacecraft provide SES and future customers the ability to expand, extend or even change a satellite’s coverage area and mission throughout its life,” ULA representatives wrote in the mission description.

“Proven hardware coupled with next-generation technology created an affordable and lightweight spacecraft, enabling two satellites to launch on a single rocket,” they added.

The Atlas V launch is part of a busy week in spaceflight. For example, SpaceX plans to launch the Crew-5 astronaut mission for NASA and another batch of the company’s Starlink internet satellites on two separate missions on Wednesday (Oct. 5), as well as two telecom satellites for the company Intelsat on Thursday (Oct. 6).

Three other missions are on tap for Thursday (Oct. 6) as well, including a Rocket Lab launch that will send to orbit a satellite built by the energy and technology firm General Atomics.

Editor’s note: This story was updated at 6:15 p.m. EDT on Oct. 4 with news of successful liftoff.