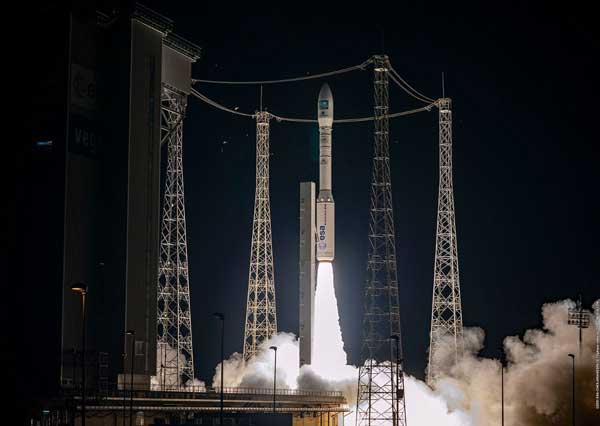 KOUROU, French Guiana (Arianespace PR) — On Monday, August 16, 2021 at 10:47 pm local time (01:47 am (UTC) on Thursday, August 17), a Vega launch vehicle operated by Arianespace lifted off successfully from Europe’s Spaceport in French Guiana (South America). This mission marked Arianespace’s 7th successful launch of the year and the second with Vega in 2021. It lasted one hour, 44 minutes and 59 seconds during which Pléiades Neo 4 separated on a sun-synchronous orbit at an altitude of 625 km while the four auxiliary payloads separated at 551 kilometers.

“I would like to congratulate all the teams involved in the success of this second Vega of 2021”, said Stéphane Israël, CEO of Arianespace. “With this mission, Arianespace demonstrates yet again the incredible versatility of Vega: we delivered safely into orbit the second satellite of the innovative Pleiades Neo 4 constellation on behalf of Airbus, alongside 4 auxiliary CubeSats for ESA and the French start-up Unseenlabs. More than ever, Vega is a key pillar of an autonomous access to space for Europe, allowing the expansion of benefits from space to earth.”

Today’s mission’s primary purpose was orbiting Pléiades Neo 4, the second of the four satellites of the Pléiades Neo constellation, the first being launched with Vega on April 28, 2021. With 30cm-native-resolution, best-in-class geolocation accuracy and twice-a-day revisit capability, the four Pléiades Neo satellites unlock new possibilities with the ultimate in reactivity. The satellite was fully funded and manufactured by its operator Airbus.

Pléiades Neo 4 was the 133rd Airbus Defence and Space satellite to be launched by Arianespace. There are currently 18 Airbus satellites in Arianespace’s backlog 11 of which will be launched with Vega and Vega C launchers. The last two satellites of the Pléiades Neo constellation will be placed into orbit in 2022 thanks to the next generation launch vehicle, Vega C.

The 19th mission of Europe’s Vega light launcher also injected four CubeSats on a sun-synchronous orbit, three for the European Space Agency (ESA) and one for the French start-up Unseenlabs:

LEDSAT, an educational project from the University of Sapienza, Italy, participating in ESA’s Fly Your Satellite! program, that has been conceived to investigate the performances of a technology based on Light Emitting Diodes for optical Low-Earth Orbit satellites tracking; RADCUBE, a CubeSat from C3S, Hungary, to demonstrate miniaturized instrument technologies that measure in-situ the space radiation and magnetic field environment in Low Earth Orbit for space weather monitoring purposes; SUNSTORM, a CubeSat from RSL, Finland, with an innovative solar X-ray spectrometer to detect the X-ray pulses produced by coronal mass ejections – massive eruptions of many millions of tons of material from the Sun’s surface; BRO-4, fourth CubeSat from Unseenlabs, France, of the constellation BRO (Breizh Reconnaissance Orbiter), a spectrum monitoring and electromagnetic intelligence service for maritime surveillance.

The later three auxiliary payloads were under contract with SAB Launch Services. In order to meet their clients’ needs and to ensure them a quicker access to Space, Arianespace and SAB Launch Services set up a collaboration to integrate all four auxiliary passengers in two PSL6U Deployers installed on the Payload Adapter.

As demonstrated by this new mission, Vega is perfectly tailored to carry the growing number of commercial and governmental small spacecraft and other lighter-weight payloads. Because of its high performance and versatility, Vega provides the best possible launch solution for small and medium spacecraft headed into a wide range of orbits (Sun Synchronous Orbit, Low Earth Orbit, Transfer to the Lagrange point L1, etc.), for Earth observation, science, education, defense and other applications.

The Vega program is the result of the cooperation of 10 European countries. It has been developed under the leadership of ESA, with Italy (ASI) as the first contributor and Avio Spa (Colleferro, Italy) as a prime contractor, responsible for all industrial operations up-to lift-off from Europe’s Spaceport. Since its maiden flight in 2012, Vega has been a part of Arianespace’s family of launch vehicles.