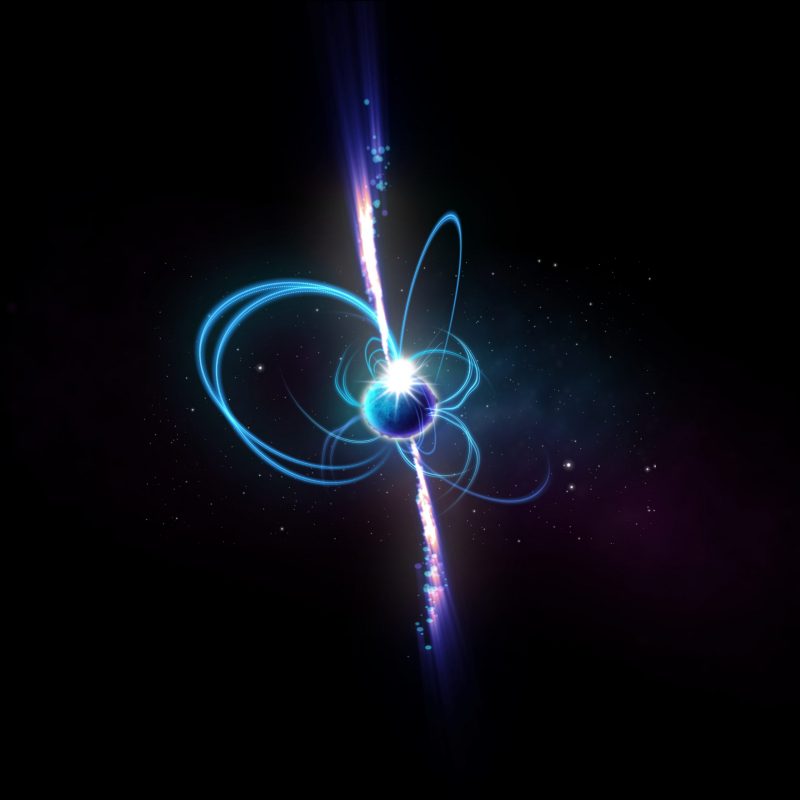 There are lots of mysterious objects in our home galaxy, the Milky Way galaxy. Consider the nearly 1,000 strange filaments, or strands, at the Milky Way’s heart, announced just last week. Some are over 150 light-years long. In late January 2022, astronomers said they’ve found yet another new mystery object, a more starlike one this time, but unlike anything they’ve ever seen before. This one blinks, on for a minute, then off for about 18 minutes, then on again. Interesting, yes? Here’s what we know so far.

Astronomers call objects like this transients. This one lies in the direction of the constellation Norma, in Southern Hemisphere skies. Whatever it is, it sends out a beam of radio waves that crosses Earth, making it one of the brightest radio sources in our sky about three times every hour.

Sometimes the deaths of stars create what astronomers call slow transients. They brighten for a few days and then, after a few months, disappear. A supernova, for example, is a type of slow transient.

Other stellar deaths lead to fast transients. A kind of neutron star called a pulsar also sends out a beam that causes us to see it flashing on and off. But pulsars flash extremely quickly, within milliseconds or seconds.

So you might see that the up-and-down brightness cycle of this new object falls in between slow and fast. The new object blinks on a timescale of not days, and not seconds … but minutes. And that is altogether new.

The scientists who studied it are part of International Center for Radio Astronomy Research (ICRAR). The peer-reviewed journal Nature published their results on January 26.

Tyrone O’Doherty was (and is) a student at Curtin University in Western Australia, studying for his Ph.D., when he found the strange new blinking object. He was using a new technique he’d developed with the Murchison Widefield Array, a radio telescope in Australia. That’s when he happened upon the new object. O’Doherty said:

It’s exciting that the source I identified last year has turned out to be such a peculiar object.

I’ll say it’s exciting, especially for a student just starting out in astronomy. The astronomers found that the object flashed on and off, as other transient objects do, but in a way they’d never seen before. Lead author Natasha Hurley-Walker of ICRAR and Curtin University said:

This object was appearing and disappearing over a few hours during our observations. That was completely unexpected. It was kind of spooky for an astronomer because there’s nothing known in the sky that does that. And it’s really quite close to us: about 4,000 light-years away. It’s in our galactic backyard.

What is this mystery object?

All objects in space are spinning. So it’s safe to say this new object is spinning in space, with some sort of beam appearing to us in radio waves as the beam sweeps over Earth. The astronomers think this object must be spinning on a timescale of minutes. But why?

The team of scientists have some theories as to what the new object is. They believe the object is similar to the collapsed core of a star. Stellar remains can become neutron stars or white dwarfs. Gemma Anderson of Curtin University and ICRAR said:

When studying transients, you’re watching the death of a massive star or the activity of the remnants it leaves behind.

As to why it is flashing on a timescale of minutes … we don’t know the answer yet.

Astronomers had predicted such an unusual type of object might exist. They called it an ultra-long period magnetar. Hurley-Walker said:

It’s a type of slowly spinning neutron star that has been predicted to exist theoretically. But nobody expected to directly detect one like this because we didn’t expect them to be so bright. Somehow it’s converting magnetic energy to radio waves much more effectively than anything we’ve seen before.

Looking for more of these mystery objects

The mystery object only showed up in the astronomer’s data for three months before disappearing completely. The astronomers are keeping their eye out for it to reappear, and in the meantime, the search is on for more like it. Hurley-Walker said:

More detections will tell astronomers whether this was a rare one-off event or a vast new population we’d never noticed before.

Astronomers are looking forward to the Square Kilometre Array (SKA) radio telescope coming online within the next decade. It will be the world’s largest radio telescope and allow astronomers to shed light on more mysterious objects in the universe.

Bottom line: Astronomers have discovered a new mysterious object that emits bright radio waves three times an hour for about a minute in duration.