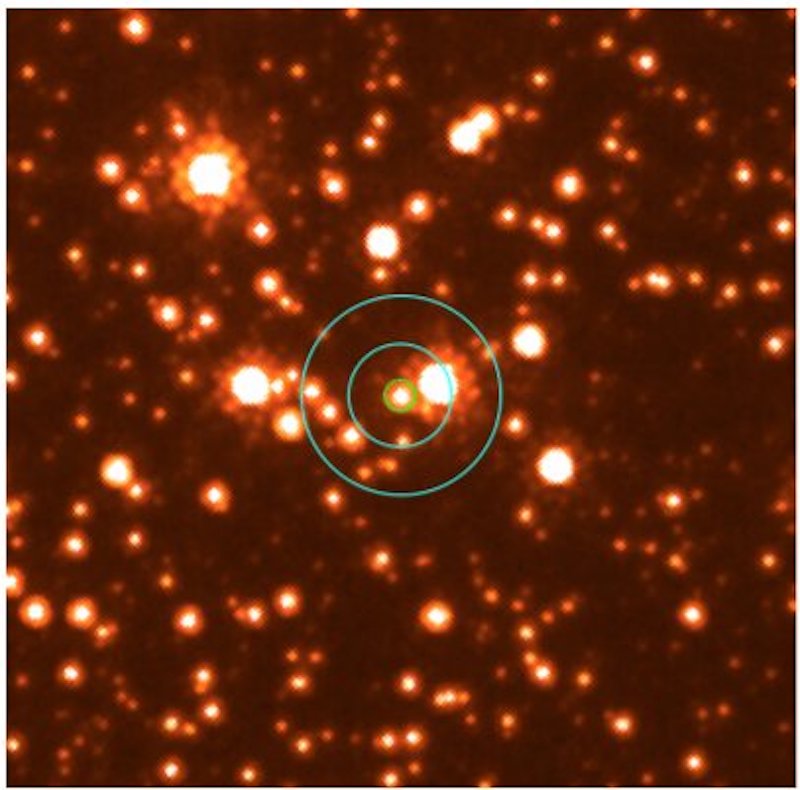 It’s now well known that supermassive black holes are common in the centers of galaxies, including our own Milky Way. They have millions or billions of times our sun’s mass. We’ve also been able to spot black holes with just a few times our sun’s mass in binary systems, where the black hole is pulling material from a companion object. But what about solitary black holes? Scientists assume solitary black holes do exist. They’ve calculated there might be millions or more in our galaxy alone. Because they’re solitary – not pulling mass from a companion – they’re very hard to detect. But on February 4, 2022, astronomers announced they’d found one.

The international team of astronomers was led by Kailash Sahu of the Space Telescope Science Institute in Baltimore, Maryland. The wandering black hole is named MOA-11-191/OGLE-11-0462, and it currently resides about 5,200 light-years from Earth. It’s what’s called a stellar-mass black hole, one that contains the critical mass (at least a few times our sun’s mass) needed to cause an ordinary star to collapse into a black hole.

The researchers published a preprint of their study on arXiv on January 31, 2022.

Wandering black hole was not easy to find

Although scientists had assumed they exist, finding solitary stellar-mass black holes is not easy. This is largely due to the fact that they are essentially invisible against the background of space. So why were scientists so confident? Generally, because other research shows that black holes often tend to form when stars die, collapse and become supernovae. Supernovae are common. Therefore, there should be many black holes as a result, floating freely thought our galaxy.

So, since these black holes are, by nature, so hard to see, how do scientists look for them? They use a technique called gravitational microlensing, where the light coming from stars is bent by the immense gravity of the black hole. Even then it isn’t easy, given the distances involved. The microlensing effect bends the light as well as magnifying it, like looking at it with a magnifying glass.

Then, in 2011, astronomers detected just such a microlensing event that might be caused by a black hole. It would, however, take time to either confirm that or not. They observed the light of the star on eight occasions, over six years, using the Hubble Space Telescope. They saw that the light changed over time, but that was not all. The star itself looked like it had moved.

How to explain this? The researchers determined that there must be another object moving, bending the light of the star as it passed by, from our point of view. They concluded the object must be a black hole, based on two lines of evidence. First, there was no light coming from the microlensing, and second, the bending, or magnification, of the star’s light lasted a long time, about 270 days. This pointed to a black hole being responsible for the microlensing event.

This wandering black hole is small and fast

The researchers estimated the black hole to be 7.1 times the mass of the sun. Its event horizon, then – the boundary defining the region of space around a black hole from which nothing (not even light) can escape – would be around 42 kilometers (26 miles) across. That’s a really small black hole compared to the monster in the center of our galaxy. It is also “wandering” really fast, about 45 kilometers (28 miles) per second.

The scientists say it may have been jettisoned into space after its previously-existing star exploded. The means the black hole is now careening by itself through interstellar space with no companions. Sometimes with supernovae, the star’s remaining dead core can be kicked out into space. The white dwarf star LP 40-365 and the pulsar PSR J0002+6216 are two known examples of this.

Wandering black hole in another galaxy

These black holes are estimated to be 400,000 times as massive as the sun.

Bottom line: For the first time ever, astronomers say they have found a solitary, wandering black hole in our galaxy. It is 7.1 times the mass of the sun and lies 5,200 light-years away. While others have been detected before in other galaxies, this is the first one to be identified in our own Milky Way.