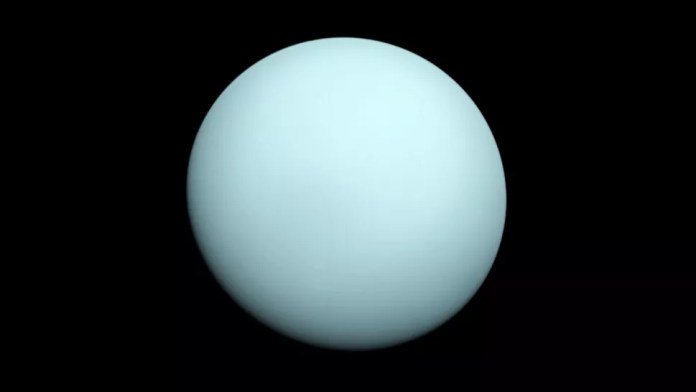 The temperature of Uranus varies drastically between the core and the atmosphere.

The temperature of Uranus averages minus 320 degrees Fahrenheit. This image was taken by NASA’s Voyager 2 spacecraft in 1985.

Uranus experiences some of the most extreme seasons in the solar system as the planet’s equator is nearly at a right angle to its orbit, tilting 97.77 degrees.

For nearly a quarter of each Uranian year, the sun directly shines over each pole, whilst the rest of the planet is plunged into dark winter. For reference, a Uranian year is equivalent to about 84 Earth years. That’s a long time to spend in the dark!

Like Neptune, Uranus, discovered in 1781, is known as an “ice giant,” in a slightly different category from Saturn and Jupiter. Both planets boast frigid atmospheres made up of ice rather than gas.

Uranus is composed predominantly of hydrogen, helium and methane — the methane reflects blue light, giving Uranus its famous blue-green hue. The temperature and pressure increase farther from the insubstantial surface (like most gas giants, the surface of Uranus is set where the pressure of the gas is equal to the pressure at sea level on Earth).

Unlike other gas giants, Uranus most likely boasts a rocky core rather than a gaseous one. Temperatures inside it may reach 9,000 degrees Fahrenheit (4,982 degrees C), according to NASA. Though this is considerably warmer than the icy atmosphere, compared to other planet’s Uranus’ core is pretty cold. Temperatures in Jupiter’s core for example reach approximately 43,000 F (24,000 C). RELATED STORIES:

Very little of Uranus’ internal heat is radiated into space. According to NASA’s Cosmos, when NASA’s Voyager 2 spacecraft arrived at Uranus, it found the gas giant lacks a strong internal heat source. The spacecraft’s infrared detectors revealed Uranus radiates about as much energy as it received from the sun.

In comparison, Jupiter and Saturn produce internal heat and radiate about twice as much energy as they receive from the sun. The lack of internal heating on Uranus is considered to be the reason for the relatively benign and inactive atmosphere.

If you want to learn more about the coldest planets in the solar system, check out this article from the science website Nine Planets (they still love Pluto). For a children-friendly introduction to Uranus, this informative article from ESA has got you covered. Another helpful learning resource is this Uranus fact file from the UK’s National Space Centre.