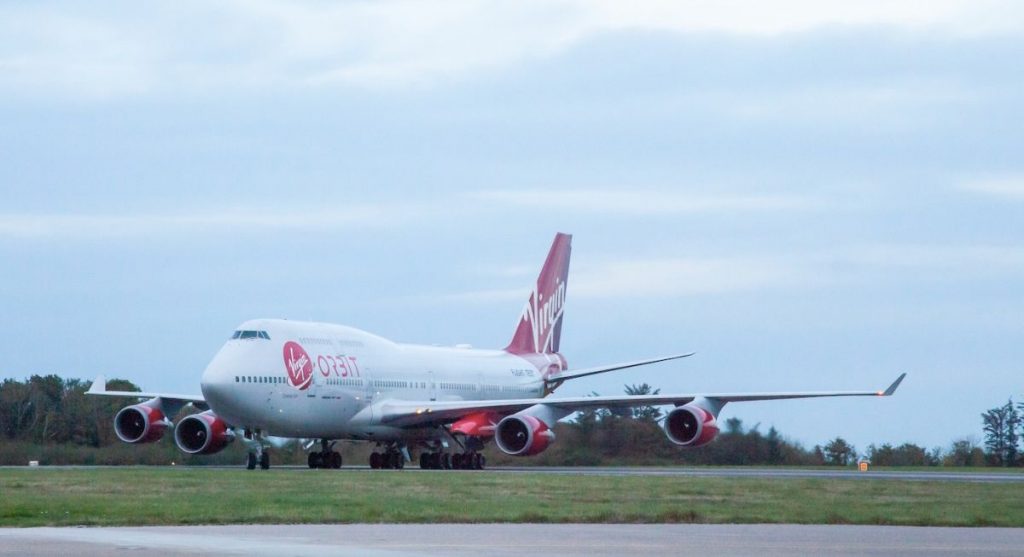 Virgin Orbit’s Cosmic Girl carrier plane has arrived in Cornwall in preparation for the first-ever orbital launch from the United Kingdom.

Cosmic Girl, a modified Boeing 747 carrier aircraft, landed at Newquay Airport in Cornwall on Oct. 11. Virgin Orbit is targeting a November takeoff from Spaceport Cornwall to launch the pioneering “Start Me Up” mission.

Cosmic Girl will carry a LauncherOne rocket with it under its wing before releasing it in the upper atmosphere. The two-stage rocket will then do the rest of the work to send eight small satellites into orbit for a range of government and commercial customers.

The Start Me Up mission is a joint project between the U.S. and U.K. governments, launched by Virgin Orbit, the United Kingdom Space Agency (UKSA), UK Space Command and Spaceport Cornwall.

“This is a huge moment for us all in Cornwall as the journey to U.K. space launch has officially begun,” Melissa Thorpe, Head of Spaceport Cornwall, said in a statement (opens in new tab).

It will also be the first international launch for Virgin Orbit, which has so far launched five missions since 2020.

All of the previous missions have lifted off from Mojave Air and Space Port in California. The most recent mission took place in July, sending seven small satellites into orbit and marking Virgin Orbit’s fourth consecutive successful launch.

The Start Me Up mission, named as a tribute to iconic British band the Rolling Stones, is seen as just the start for U.K. launches.

British launch firms Skyrora and Orbex are preparing to make their first orbital launch attempts in 2023, using the new spaceports of SaxaVord and Sutherland respectively, both of which are located in Scotland.