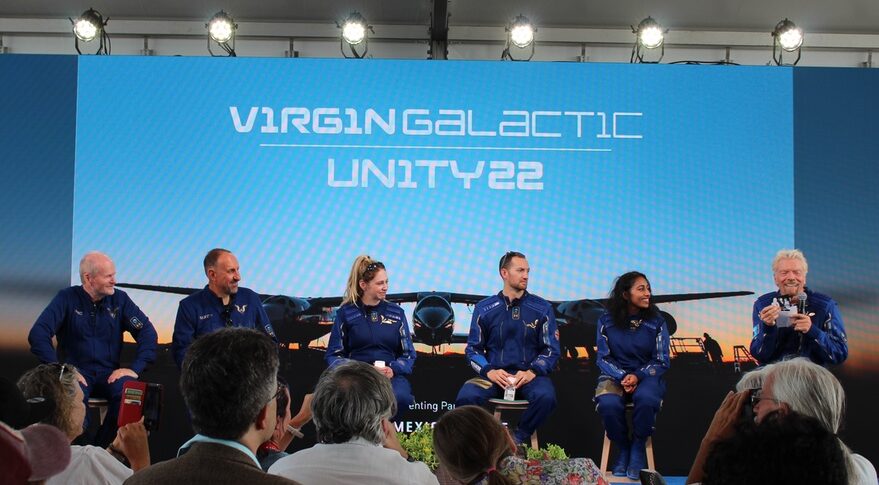 the “Unity 22” test flight met or exceeded expectations, with no serious issues during their ascent to approximately 86 kilometers and glide back to a runway landing.

“I’m never going to be able to do it justice. It’s indescribably beautiful,” Branson said, describing the view out the windows. Earlier, speaking on stage at the spaceport after the flight, he described the experience “as just magical.”

The flight itself was the fourth time the VSS Unity spaceplane had flown above the 80-kilometer altitude that the company defines as space. This flight was similar to the previous three, including the most recent one May 22, with few issues.

“The quick look of what we saw live, and the pilot feedback, was that all systems performed normally,” Mike Moses, president of space missions and safety at Virgin Galactic, said in an interview after the flight. “The spaceship flew its trajectory fantastically.”

There were a few minor issues, such as dropouts of live video from within the SpaceShipTwo cabin that Moses said might be caused by antenna blockages. The 90-minute delay in the flight, to a hotter part of the day, also meant the cabin was a little warmer than expected. “We can fix that pretty quickly,” Moses said. “It looks like we’re in pretty good shape.”

Branson, who said he went on this flight to evaluate the overall experience, said he took note of minor things in the week leading up to the flight. “I’ve written down 30 or 40 little things that would make the next experience for the next person who goes to space with us that much better,” he said. “But, having said that, 99.99% was beyond my wildest dreams.”

The flight was the first with four people in the cabin, including Branson and Virgin Galactic employees Sirisha Bandla, Colin Bennett and Beth Moses on board. “The feedback from the crew in the back was that the cabin was excellent. They really enjoyed their views. The hardware worked well,” Mike Moses said.

Bennett, at the press conference, said he was busy in the first part of the flight doing checkouts of the cabin when Beth Moses, the test director of the flight, reminded him to look out the window. “The view was just stunning,” he said. “I was mesmerized for a good 30 to 40 seconds.”

Mike Moses and other company executives did not give a schedule for upcoming flights. He said that will depend on a more thorough review of the data from this flight. Virgin Galactic still plans to perform two more test flights, including one for the Italian Air Force, before going into a maintenance period last this fall that will extend to early 2022.

“We’re in a stage of testing now where we’re moving from the more hardcore aerodynamic testing into more operational readiness testing,” he said. “Now it’s much more about repeating the trajectory, evaluating the results and then optimize.”

The company also didn’t offer much a look at its future strategy. When Virgin Galactic announced July 1 that Branson would be on the flight, Branson said that afterward “I will announce something very exciting to give more people a chance to become astronauts.” Many people interpreted that to be the resumption of ticket sales, something company executives previously said would take place after Branson flew.

Instead, Branson announced a partnership with Omaze, a fundraising platform, to raffle off two seats on “one of the first” commercial SpaceShipTwo flights in early 2022. Funds raised in the contest will go to Space for Humanity, an organization that itself works to provide flight opportunities on suborbital vehicles and high-altitude balloons.

“If enough people over the world participate, it just means the charity can keep on doing tickets for people,” Branson said. “It’s a lovely sort of self-propelling way of just trying to get lots of people who couldn’t have otherwise afforded it to go to space.”

The prize includes a guided tour of the spaceport by Branson, but at the press conference he said it’s unlikely he’ll fly again on SpaceShipTwo any time soon. “Will I do another adventure? I’m not sure it would be fair to put my family through another one,” he said, a reference to past efforts, like attempting to fly a balloon across the Atlantic. “I’ll definitely give it a rest for the time being.”