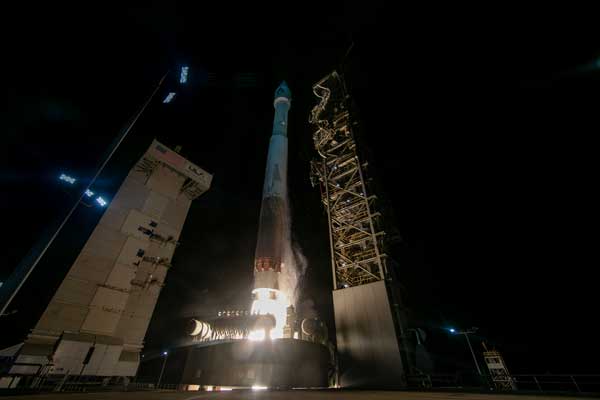 The United States and China launched supply ship to their respective space stations last week as NASA delayed the launch of the Artemis mission until Nov. 16 due to a hurricane. United Launch Alliance (ULA) launched the newest U.S. weather satellite and an innovative NASA heat shield that could be used to land astronauts and payloads on Mars.

There were five launches last week, raising the global total to 158 for 2022. Six launches are planned for the week ahead.

Northrop Grumman launched its second Cygnus resupply ship to the International Space Station (ISS) this year on Nov. 7. The spacecraft was able to reach ISS despite one of its two circular solar panels failing to deploy. Northrop Grumman said that debris from an insulation blanket on the Antares rocket prevented the panel from opening.

China launched the Tianzhou-5 cargo ship to the Tiangong space station on Nov. 12. The mission will carry at least six satellites for deployment into low Earth orbit.

An United Launch Alliance Atlas V launched America’s newest weather satellite, NOAA’s Joint Polar Satellite System-2 (JPSS-2), from Vandenberg Space Force Base in California at 1:32 a.m. PST on Thursday. After hours of difficulty in deploying the spacecraft’s solar array, NASA reported that the array was fully extended and JPSS-2 is performing normally. Details of the delay were not disclosed.

JPSS-2 is the third in a series of five advanced polar-orbiting satellites that circle the Earth 14 times per day to provide a continuous stream of weather data. NASA managed the development and launch of JPSS-2 for NOAA, which operates the spacecraft.

“The need for advanced satellites, such as JPSS-2, to accurately predict weather and climate has never been greater,” said Michael C. Morgan, Ph.D., assistant secretary of commerce for environmental observation and prediction. “With the steady rise in the number of billion dollar disasters, NOAA remains committed to putting the best technology in space that leads to more reliable, timely forecasts.”

NASA’s inflatable heat shield, the Low-Earth Orbit Flight Test of an Inflatable Decelerator (LOFTID) , was launched as a secondary payload on the JPSS-2 launch. LOFTID inflated before separating from the Atlas V’s Centaur upper stage and reentering the atmosphere over the Pacific Ocean. The test vehicle ejected a backup data recorder module before it splashed down under a parachute. The test vehicle and the backup module were recovered from the ocean. The backup module was there in case LOFTID and the primary data recorder were lost at sea.

The cone-shaped LOFTID is 6 meters (19.7 ft) in diameter, making it the largest blunt body aeroshell to ever reenter from space. Traditional ablative heat shields used in previous missions have been smaller, limiting the size of spacecraft that can enter planets and moons with atmospheres.

LOFTID is composed of a stack of pressurized concentric rings known as tori composed of braided synthetic fibers that are 10 times stronger than steel by weight. The reentry system is equipped with a flexible thermal protection system that insulate the rings from heat in excess of 1,600 C (2,900 F). The foldable, scalable heat shield takes up less room in a launch vehicle.

SpaceX launched the Galaxy 31 and 32 geosynchronous communications satellites for Intelsat from Cape Canaveral Space Force Station in Florida. It was SpaceX’s 52nd launch of 2022.

Earlier in the day, China launched the Yunhai-3 satellite into sun-synchronous orbit aboard a Long March 6A rocket from the Taiyuan Satellite Launch Center. The spacecraft will conduct atmospheric and environmental research.

The United States continues to lead with 77 launch attempts. China is in second place with 51, with Russia a distant third with 20. The three nations have conducted 93.7 percent of orbital launches this year.

Russia’s launch total was reduced due to the nation’s invasion of Ukraine in February. The war resulted in the cancellation of six launches booked by OneWeb and one by the European Space Agency.

Europe and Japan are dealing with the delayed introduction of new boosters. The first flight of Europe’s Ariane 6 has been delayed to the fourth quarter of next year. Japan’s new H3 rocket will also make its maiden flight in 2023.