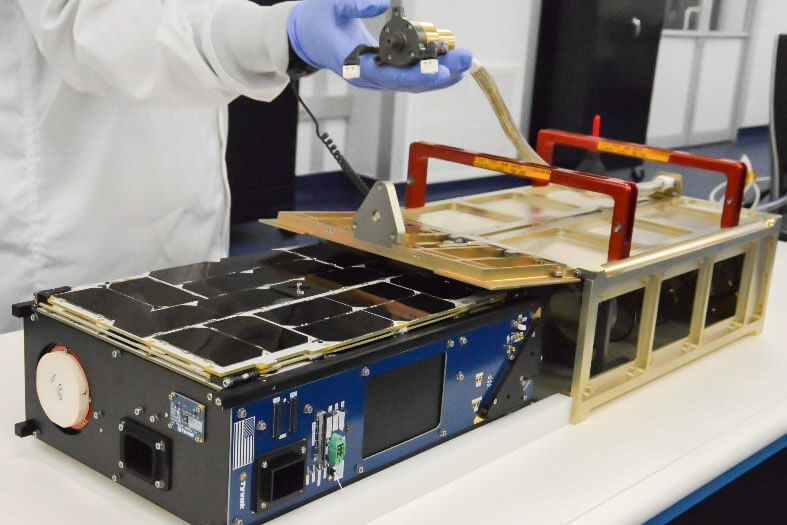 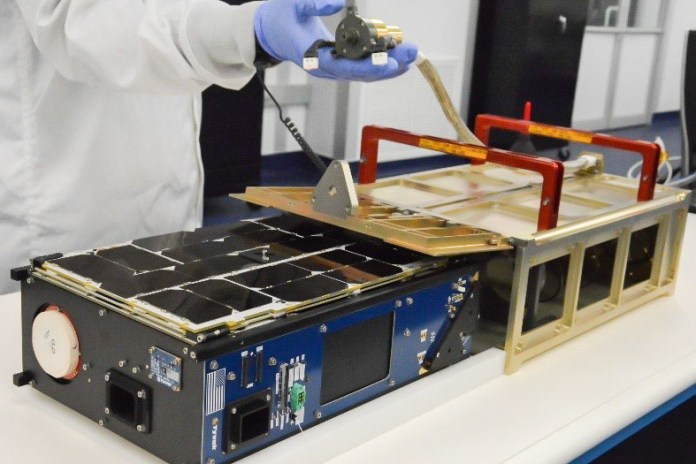 File photo of a Tyvak-built 6U CubeSat being placed Ito its launch dispenser. Credit: Tyvak

The small satellite, named Tyvak 0130 and weighing about 25 pounds (11 kilograms), launched Saturday from NASA’s Kennedy Space Center in Florida with a cluster of 52 Starlink internet satellites and a radar observation craft from Capella Space.

A spokesperson for Tyvak Nano-Satellite Systems, based in Irvine, California, said Monday that the small Tyvak 0130 satellite carries optical telescopes capable of black-and-white and color imaging. The telescopes were developed in collaboration with Lawrence Livermore National Laboratory, according to Tyvak.

The Tyvak 0130 satellite is based on a 6U CubeSat platform. The main body of a 6U CubeSats is typically about the size of a briefcase.

Tyvak said the new satellite builds on lessons learned from Tyvak 61, a smaller 3U CubeSat launched in 2018. Tyvak 61, also known as GeoStare, tested the performance of monolithic telescope design that could be used to collect remote sensing data for Earth observation, astronomy, and space debris tracking applications.

The monolithic telescope replaces the primary and secondary mirror structures in standard telescopes with one solid piece of glass, according to Tyvak and LLNL, with optical shapes and reflective coatings at both ends of the glass.

A space telescope, dubbed the V4 and an identical twin to this one, flew on LLNL’s GEOstare1 mission launched in 2018. The telescope was employed to demonstrate the utility of nanosatellites for space situational awareness. Credit: Julie Russell/Lawrence Livermore National Laboratory

The larger Tyvak 0130 satellite launched Saturday can accommodate twice the number of telescopes as the Tyvak 61 testbed. The new spacecraft is now in its commissioning phase, according to Tyvak.

“Once on-orbit performance validation is completed, Tyvak 0130 will be the most optimized commercial Space Situational Awareness (SSA) satellite available in the market today,” the company said.

A Falcon 9 rocket climbs away from pad 39A Saturday. Credit: Stephen Clark/Spaceflight Now

The monolithic telescopes can range in size from one inch to 14 inches (2.5 centimeters to 35.5 centimeters), according to Tyvak. They can fit on a range of small satellites ranging from nanosatellites to microsatellites that can weigh several hundred pounds.

Tyvak 0130 is on the smaller end of the spectrum.

“The MonoTele nanosatellite imaging payloads can be used across multiple applications and will serve Earth observation, space situational awareness, and satellite navigation initiatives,” Tyvak said in a statement last year announcing the agreement with LLNL.