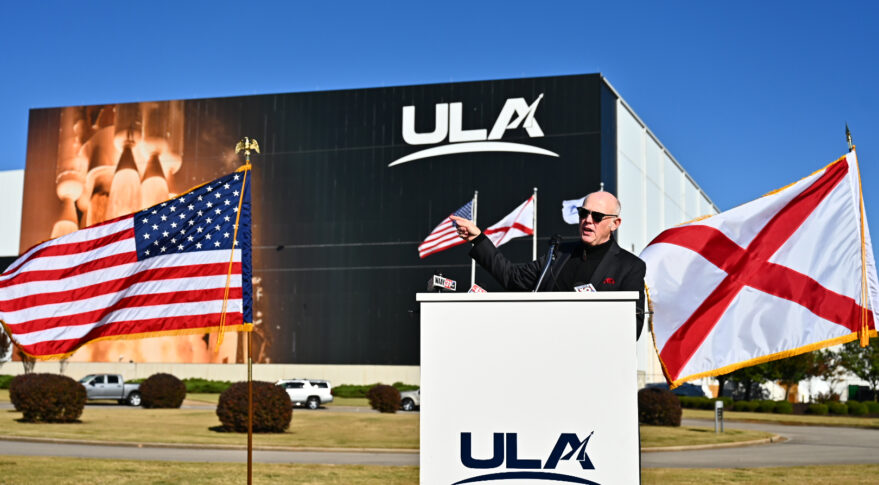 WASHINGTON — United Launch Alliance CEO Tory Bruno is advising the U.S. Space Force to preemptively buy heavy launch services as rockets could be in short supply over the next several years.

“There is a worldwide shortage of launch,” Bruno told SpaceNews in a recent interview.

“For the past 20 to 30 years, there has always been more launch provider capacity than there have been missions,” he said. Now the tables have turned as commercial megaconstellations like Amazon’s Project Kuiper are buying most of the available large rockets, including ULA’s. “The scarcity environment is a big shift in our industry.”

Amazon in April announced it procured 83 launches on ULA’s Vulcan Centaur, Blue Origin’s New Glenn and Arianespace’s Ariane 6, none of which have yet flown. If all goes as planned, ULA and Arianespace expect to start flying their new vehicles in 2023, and it’s still unclear when New Glenn will be ready. Amazon also ordered nine launches on ULA’s Atlas 5, a vehicle that is in limited supply as ULA plans to retire it and transition to Vulcan.

The rise in commercial demand and the Russian Soyuz rocket’s sudden exit from the global stage after the invasion of Ukraine have created a “perfect storm,” said Bruno.

These dynamics could put the U.S. national security launch program in a bind, he warned.

ULA and SpaceX are under contract to launch as many as 35 U.S. military and intelligence space missions under the National Security Space Launch Phase 2 deal the companies won in 2020. These contracts are up for recompete in 2024. The Space Force’s Space Systems Command is drafting a proposed Phase 3 strategy to be released sometime next year.

Looking beyond the Phase 2 contract, Bruno said, both ULA and SpaceX will be hard pressed to meet government and growing commercial demand. “There’ll be more missions than both of us are really able to fly and that’ll be for a number of years,” he said.

“By the way, this is one of the reasons why we advise the national security procurers to plan ahead, just as they did in Phase 2,” said Bruno.

“They should do ‘block buys,’ for example, in order to avoid being caught in a position where they can’t get on a manifest when they want to, or have the flexibility that they’ve had in the past,” he said.

ULA has been the military’s primary launch services provider for nearly two decades and has not had a significant commercial workload. “So when a national security space payload is delayed for some reason, in the past we were able to just simply accommodate that,” said Bruno. “That’s going to be harder going forward when the commercial marketplace is trying to buy up all the capacity.”

SpaceX, too, will face pressures to launch its customers’ satellites and its own Starlink broadband constellation, Bruno said. “As with the Kuiper constellation, there are milestones you have to hit, and you need a certain amount of satellites covering the world … so all of those Starlink launches are captive for Falcon or for Starship in the future, and they’ll be pretty busy flying all of those,” he added. “We’re in a state of shortage of lift.”

The Space Force and the Defense Department are still discussing a strategy for the next NSSL launch services procurement. Officials said they would be open to a different model than the two-vendor approach. One of the options being discussed is to select multiple vendors to compete for task orders, a method the Space Force uses to buy smallsat launch services.

In preparation for the Phase 3 procurement, the Space Force has reached out to the industry and asked for feedback, Bruno said. “What we tell them is that when they were doing Phase 2 it was important to stabilize the industrial base for heavy lift, and they did a fine job of doing that.”

“And as we roll into Phase 3 … they have to decide not just the structure of the procurement, but what they are trying to procure,” said Bruno, and understand the “new reality that we have in our marketplace.”

The Space Force “did block buys in Phase 2 and attracted investment for new capabilities. Now they need to block buy so that they can be assured of the flexibility and schedule that they need,” Bruno insisted, “because the private, commercial, megaconstellation marketplace is buying up literally all the capacity.”

“That’s the nature of the conversation I’m having with them,” he said. “It’s about making sure they understand the marketplace and encouraging them to focus on the nation’s needs.”

On the status of Vulcan Centaur, Bruno said the vehicle is being assembled at ULA’s factory in Decatur, Alabama. After years of delays, Blue Origin finally completed testing of the BE-4 main booster engines and delivered the first two for Vulcan’s maiden flight, which is now projected for the first quarter of 2023.

If Astrobotic’s lunar lander is delayed beyond the first quarter, ULA is prepared to launch a mass simulator surrogate payload. Vulcan needs to launch successfully twice to be certified for NSSL Phase 2 missions.