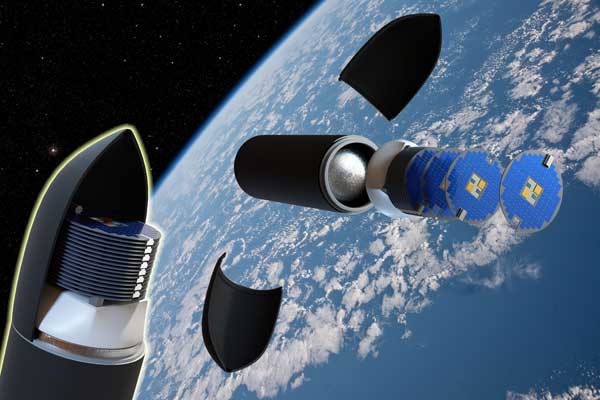 In response to growing interest in capable SmallSats, a team of engineers and scientists are thinking outside the (CubeSat) box with DiskSat, a new

DiskSat is a plate-shaped satellite (1 meter in diameter, 2.5 centimeters thick) that could provide the required power and aperture needed for future missions. (Credit: Aerospace Corporation)

In response to growing interest in capable SmallSats, a team of engineers and scientists are thinking outside the (CubeSat) box with DiskSat, a new circular satellite design.

EL SEGUNDO, Calif. (Aerospace Corporation PR) — A defining feature of a standard CubeSat is its containerization—the shape, volume and design—which makes it rideshare-friendly. This quality was historically important since these devices comprised a minor part of the total payload. Containerization ensured that CubeSats could not endanger the launch vehicle or primary payload.

Now, Aerospace engineers and scientists have reevaluated whether the standard CubeSat may be the best shape for a mission.

The answer may be in the form of a two-dimensional disk aptly called DiskSat, a NASA Small Spacecraft Technology program-funded concept that may expand the SmallSat mission envelope and enable major scientific discovery at lower cost.

The outside-of-the-box concept for DiskSat originated when Richard Welle, Aerospace Senior Scientist in the Mission Systems Engineering Division and xLab, was part of a study interested in using CubeSats to form a large constellation. The team quickly recognized the mission would need more power and aperture than a CubeSat could provide. Placing the constellation in well-defined orbits would also require dedicated small launch vehicles.

Without the need for rideshare, Welle realized that the satellite design options could be expanded beyond the CubeSat. DiskSat – a plate-shaped satellite (1 meter in diameter, 2.5 centimeters thick) could provide the required power and aperture while still allowing 20 or more satellites to be containerized in a single small launch vehicle.

“The concept comes from a CubeSat world, so there are a lot of similarities,” said Welle. “DiskSat is an alternate approach to containerization. It gives you the benefits—standardized launch interface, low launch costs and simple mechanical design—but at the same time you get what is not possible with CubeSats: high power and large aperture.”

Missions involving radio frequency and other kinds of signaling would benefit from DiskSat’s larger surface area. The high power and low mass make electric propulsion for maneuvering an ideal option. And while typical satellites do not operate below 300-400 kilometers in altitude, DiskSat’s low drag means it can operate down to about 200 kilometers with electric propulsion—an ability that can provide better resolution or sensitivity.

“With DiskSat, the payload and bus are decoupled across the standard interface, and the payload is no longer volume constrained,” said Thomas Paige, Aerospace Senior Project Engineer in the Systems Formulation and Implementation Division and Civil Systems Group.

Welle estimates that DiskSat may be placed into orbit for the cost of 3U CubeSat while featuring greater capability.

NASA’s Small Spacecraft Technology program provides funding for DiskSat’s demonstration mission. The program resides within the agency’s Space Technology Mission Directorate and is hosted at NASA’s Ames Research Center in California’s Silicon Valley. In the near term, a demonstration mission for four spacecraft in low Earth orbit is being planned to verify baseline DiskSat performance and the launch dispenser mechanism—the latter being a key goal since dispensing must be done in a way that prevents contact between satellites. The four demonstration satellites will have electric propulsion and operate in pairs: one pair will fly at low altitude, and the other will demonstrate high-altitude operations, showcasing DiskSat’s maneuverability.

Beyond LEO and Earth science, there is potential for DiskSat to perform in lunar communications and resource mapping missions. The Aerospace team believes the small satellite will appeal to the wider space and defense sectors.

“There’s potential for missions that could be done using the DiskSat platform for all of our government customers,” said Catherine Venturini, Aerospace Senior Project Leader in the Science and Technology Strategy and Development Division and head of the Small Satellite Technology Hub. “There’s also interest among our overall customer base, including commercial space.”