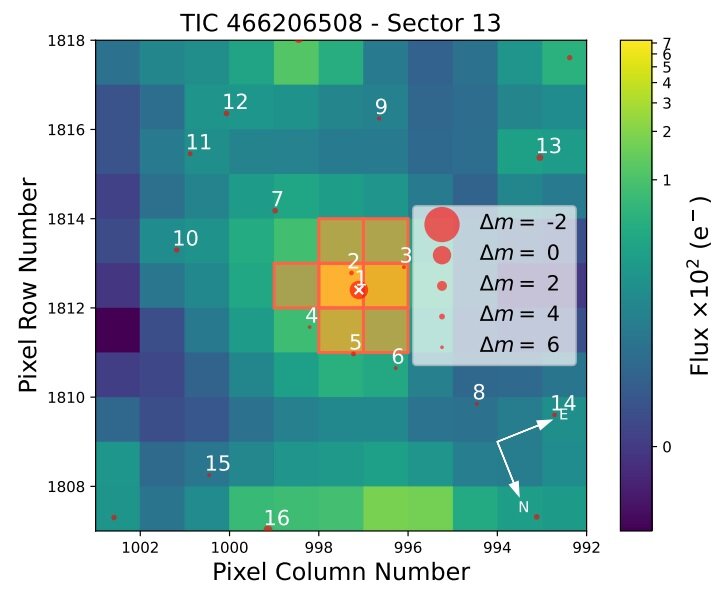 Using the Transiting Exoplanet Survey Satellite (TESS), an international team of astronomers has detected a new old and warm Jupiter-like alien world orbiting a G-dwarf star. The newfound exoplanet, designated TOI-5542 b, is the size of Jupiter—about 30% more massive than the solar system’s biggest gas giant. The finding is reported in a paper published September 29 on the arXiv pre-print server.

TESS is conducting a survey of about 200,000 of the brightest stars near the sun with the aim of searching for transiting exoplanets. So far, it has identified nearly 6,000 candidate exoplanets (TESS Objects of Interest, or TOI), of which 256 have been confirmed so far.

Now, a group of astronomers led by Nolan Grieves of the University of Geneva in Switzerland, has recently confirmed another TOI monitored by TESS. They report that a transit signal has been identified in the light curve of a metal-poor G dwarf known as TOI-5542 (other designation TYC 9086-01210-1). The planetary nature of this signal was confirmed by follow-up observations with CORALIE and High Accuracy Radial velocity Planet Searcher (HARPS) spectrographs.

“We report the discovery and characterization of the warm Jupiter TOI-5542 b. The planet was first detected by TESS as two single transit events 375.6 days apart,” the researchers wrote in the paper.

The newfound exoplanet has a radius of approximately 1.01 Jupiter radii and a mass of 1.32 Jupiter masses, which yields a density at a level of 1.6 g/cm3. It orbits its parent star every 75.12 days, at a distance of 0.33 AU from it. The planet’s equilibrium temperature was estimated to be 441 K, therefore the astronomers classified it as a warm Jupiter.

The host TOI-5542 is of spectral type G3V, has a radius of about 1.06 solar radii and is 11% less massive than the sun. The star has an effective temperature of some 5,700 K, luminosity at a level of approximately 1.05 solar luminosities and its age is estimated to be 10.8 billion years. The metallicity of TOI-5542 was measured to be approximately -0.21.

Taking into account that TOI-5542 is nearly 11 billion years old, the researchers underlined that its exoplanet is therefore one of the oldest known long-period warm Jupiters and one of the few with an age estimate.

“TOI-5542b is one of the oldest known warm Jupiters and it is cool enough to be unaffected by inflation due to stellar incident flux, making it a valuable contribution in the context of planetary composition and formation studies,” the authors of the paper concluded.

Given that TOI-5542 b has a circular orbit, the researchers noted that it is difficult to predict a formation or migration pathway for this planet. They assume that it likely formed via disk migration or in situ formation as other mechanisms that are more likely to leave a planet on an eccentric orbit around its parent star.

Citation:
TESS discovers an old warm Jupiter-like exoplanet (2022, October 6)
retrieved 7 October 2022
from https://phys.org/news/2022-10-tess-jupiter-like-exoplanet.html
This document is subject to copyright. Apart from any fair dealing for the purpose of private study or research, no
part may be reproduced without the written permission. The content is provided for information purposes only.