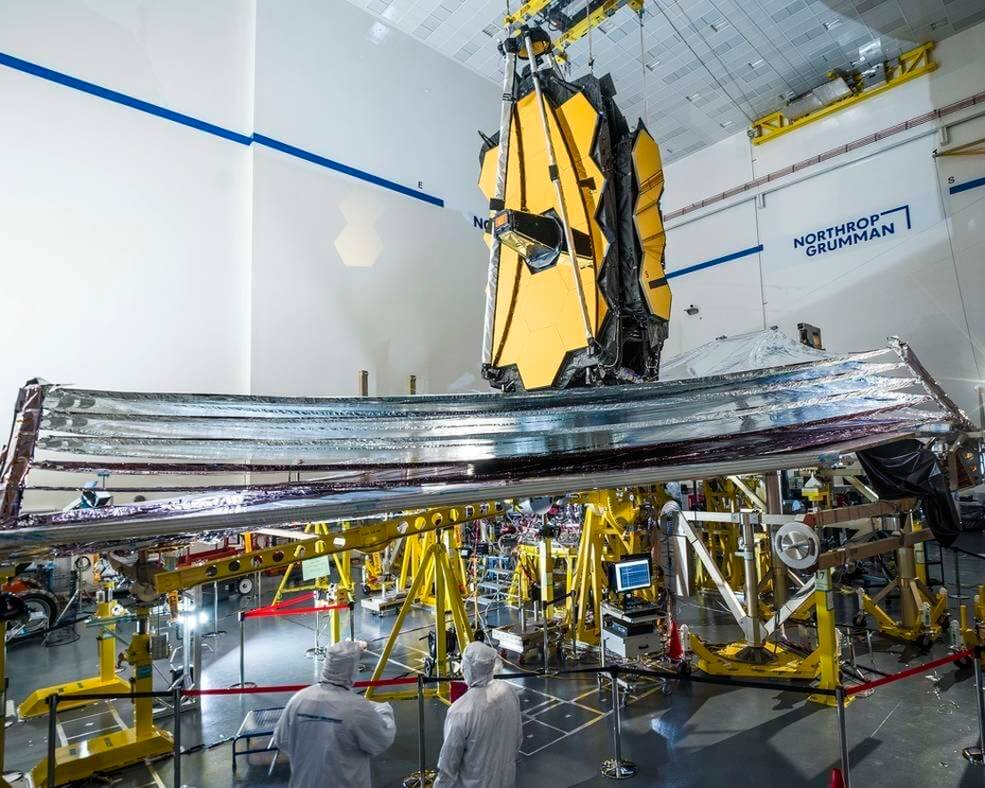 The James Webb Space Telescope team has fully deployed the spacecraft’s 70-foot sunshield, a key milestone in preparing it for science operations.

The sunshield – about the size of a tennis court at full size – was folded to fit inside the payload area of an Arianespace Ariane 5 rocket’s nose cone prior to launch. The Webb team began remotely deploying the sunshield Dec. 28, 2021, three days after launch.

NASA will hold a media teleconference at 12:45 p.m. EST today, Tuesday, Jan. 4, to discuss the completion of this critical step. To participate by telephone, media must RSVP to Laura Betz at: laura.e.betz@nasa.gov. Audio of the teleconference will also stream on the agency’s website.

“This is the first time anyone has ever attempted to put a telescope this large into space,” said Thomas Zurbuchen, associate administrator for NASA’s Science Mission Directorate at the agency’s headquarters in Washington. “Webb required not only careful assembly but also careful deployments. The success of its most challenging deployment – the sunshield – is an incredible testament to the human ingenuity and engineering skill that will enable Webb to accomplish its science goals.”

The five-layered sunshield will protect the telescope from the light and heat of the Sun, Earth, and Moon. Each plastic sheet is about as thin as a human hair and coated with reflective metal, providing protection on the order of more than SPF 1 million. Together, the five layers reduce exposure from the Sun from over 200 kilowatts of solar energy to a fraction of a watt.

This protection is crucial to keep Webb’s scientific instruments at temperatures of 40 kelvins, or under minus 380 degrees Fahrenheit – cold enough to see the faint infrared light that Webb seeks to observe.

“Unfolding Webb’s sunshield in space is an incredible milestone, crucial to the success of the mission,” said Gregory L. Robinson, Webb’s program director at NASA Headquarters. “Thousands of parts had to work with precision for this marvel of engineering to fully unfurl. The team has accomplished an audacious feat with the complexity of this deployment – one of the boldest undertakings yet for Webb.”

The unfolding occurred in the following order, over the course of eight days:

The unfolding and tensioning of the sunshield involved 139 of Webb’s 178 release mechanisms, 70 hinge assemblies, eight deployment motors, roughly 400 pulleys, and 90 individual cables totaling roughly one quarter of a mile in length. The team also paused deployment operations for a day to work on optimizing Webb’s power systems and tensioning motors, to ensure Webb was in prime condition before beginning the major work of sunshield tensioning.

“The sunshield is remarkable as it will protect the telescope on this historic mission,” said Jim Flynn, sunshield manager at Northrop Grumman, NASA’s primary contractor for Webb. “This milestone represents the pioneering spirit of thousands of engineers, scientists, and technicians who spent significant portions of their careers developing, designing, manufacturing, and testing this first-of-its-kind space technology.”

The world’s largest and most complex space science observatory has another 5 1/2 months of setup still to come, including deployment of the secondary mirror and primary mirror wings, alignment of the telescope optics, and calibration of the science instruments. After that, Webb will deliver its first images.

The telescope’s revolutionary technology will explore every phase of cosmic history – from within our solar system to the most distant observable galaxies in the early universe, to everything in between. Webb will reveal new and unexpected discoveries and help humanity understand the origins of the universe and our place in it.

The James Webb Space Telescope is an international partnership with the ESA (European Space Agency) and the Canadian Space Agency. NASA Headquarters oversees the mission. NASA’s Goddard Space Flight Center in Greenbelt, Maryland, manages Webb for the agency and oversees work on the mission performed by the Space Telescope Science Institute, Northrop Grumman, and other mission partners. In addition to Goddard, several NASA centers contributed to the project, including the agency’s Johnson Space Center in Houston, Jet Propulsion Laboratory in Southern California, Marshall Space Flight Center in Huntsville, Alabama, Ames Research Center in California’s Silicon Valley, and others.

For more on where Webb is in the commissioning process: