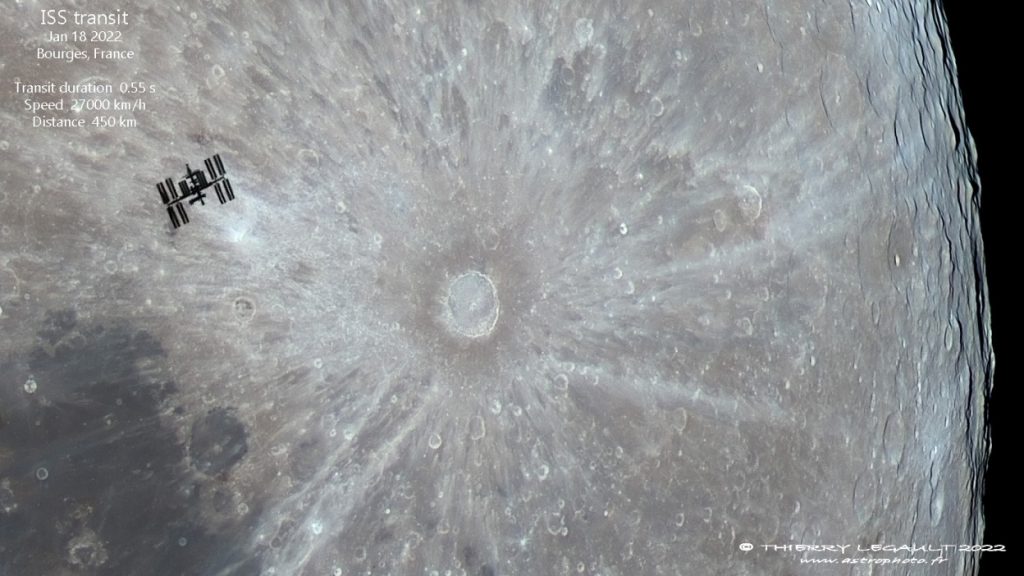 Thierry Legault pointed his camera up at the night sky and waited for the International Space Station to cross in front of the moon.

Then, like a water strider on a pond, the Earth-orbiting laboratory skated over the pool of lunar light. He had a half-second to get the shot. Click.

Legault caught a spectacular picture of the spaceship on Jan. 18, with the crusty, mottled moon in full form behind it. The silhouette of the space station is so clear, observers can make out a faint grid pattern on its solar panel arrays. The attached SpaceX Crew-3 spacecraft, which brought up NASA astronauts Raja Chari, Tom Marshburn, and Kayla Barron, as well as European Space Agency astronaut Matthias Maurer in November, is easily identifiable.

The image is among the most detailed snapshots ever taken of the space station passing in front of the moon. Astronomers refer to such an event as a “lunar transit.” Bill Ingalls, senior contract photographer for NASA headquarters, was so impressed, he retweeted it.

“There is a lot of adrenaline, a bit like a total eclipse, waiting, preparing, waiting for the moment,” Legault told Mashable. “There is a kind of suspense. It’s so fast that you don’t see it, visually.”

For the moon picture he took last month, Legault traveled alone, 155 miles south, to a remote spot in the countryside of Bourges, France. It was a foggy evening, and he worried the weather would be his enemy. But he sojourned on, spending a half-hour looking for the right place to set up his gear.

Then, a lucky break: The fog parted, just as the spaceship was due to pass overhead.

“There is a lot of adrenaline, a bit like a total eclipse, waiting, preparing, waiting for the moment.”

He started his astronomical video camera, recording about 10 to 15 seconds before he anticipated the crossing. Legault uses the space station transit-finder.com to help with time and place calculations.

But he didn’t know whether he captured the shot until he reviewed upwards of 400 frames taken with his specialized astrophotography instrument, a CFF Telescope. The exposure time was 1/6,000th of a second, he said. Any longer and the spacecraft would have blurred. It flies at about 17,000 mph, or 5 miles per second.

The anticipation was unbearable as he waited for his computer to extract all the files. Then, as he sifted through the images, there it was: Both the station and the moon appearing sharp as ever, though the moon is about 1,000 times farther away.

The intricate photo, which showcases the Tycho crater in the moon’s southern highlands, caught the attention of former Canadian astronaut Chris Hadfield.

Ingalls, who has taken space station lunar transit pictures of his own, said he enjoyed reading Legault’s photo backstory, as rich in detail as the photo. The information Legault shared about his location, equipment, and technique allows people to understand his process.

The photo is “stunning,” Ingalls said. “It is pretty clear and sharp,” he added.

Legault has written three astrophotography books — The New Atlas of the Moon with Serge Brunier, Astrophotographie, and Les Secrets de l’Astrophotographie — and published many articles on his craft. When he began his first book, he decided to only use his own photography, which meant Legault had to expand his portfolio: eclipses, comets, polar auroras, and everything else in the night sky.

That included solar and lunar transits of the space station. In 2005, he shot his first and has continued every October through February, when the moon is high.

This session was by far his best, he said.

Despite Legault’s experience, there were a few skeptics sprinkled among the fans on social media when he posted his photo. They doubted its authenticity.

“I’m trying to digest how you did it,” a person identified as Gregory Santoni said on Twitter. “I’ll have my mathematician gf do the numbers to see if the ISS could be seen with such clarity and detail from 450 kms away … You must have spent hundreds of thousands of dls in equipment. The best money you’ve ever spent.”

“I did it, so it can be done,” Legault replied. “Anyway, will a million dollar racket will (sic) make you defeat Federer or Nadal?”

The naysayers can be frustrating.

“It’s like people who don’t believe that man went on the moon or other things. In a way, it’s a bit disappointing because I make a lot of efforts to succeed,” he said. “In another way, I take it like a compliment because they think that it is so difficult that it may be impossible. So, OK, I prefer to take it in a positive way.”

The space station, the length of a football field, is the largest spacecraft in orbit and has an acre of solar panels to power it, reflecting light from the sun. It’s often visible zipping across the night sky. You can find out when and how to see the space station using online tools, like spotthestation.nasa.gov.