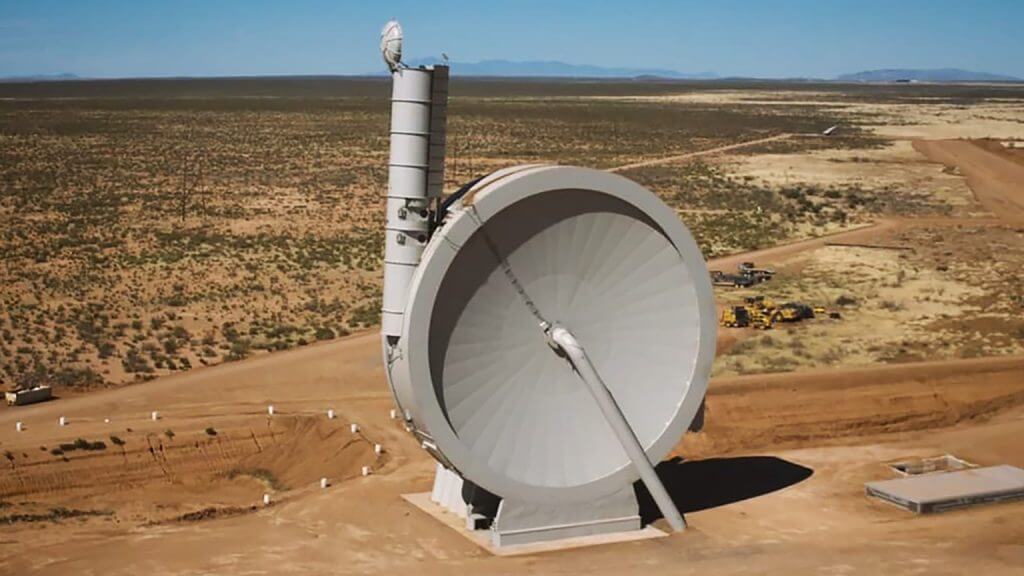 SpinLaunch’s launcher, which is larger than the Statue of Liberty and works like the Olympic hammer-throw event, just came online in the New Mexico desert.

The future of satellite launches may be taking shape in New Mexico, where a startup just tested out a system designed to fling the objects into space, rather than blasting them into orbit with rockets.

The challenge: To put satellites into space, we load them onto a rocket carrying a ton of propellant, then burn that propellant to create thrust. This allows the rocket to break free of Earth’s gravity, and once it’s high enough, it can release its payload.

The development of reusable rockets has made this process a lot cheaper — we used to just have to eat the cost of an entire rocket as part of a launch — but fuel is still very expensive, and burning it releases a lot of greenhouse gases.

Satellite launches 2.0: California-based spaceflight startup SpinLaunch is testing a different approach to satellite launches — one that involves spinning them really fast and then letting them go at just the right moment.

“The more crazy the project is, the better off you are just working on it — rather than talking about it.”

It’s sort of like the Olympic hammer-throw event, but with satellites instead of metal balls, and even SpinLaunch’s own CEO Jonathan Yaney knows that that sounds bizarre, which is why the startup has largely operated under the radar for the past seven years.

“I find that the more audacious and crazy the project is, the better off you are just working on it — rather than being out there talking about it,” he told CNBC. “We had to prove to ourselves that we could actually pull this off.”

The project’s not seeming so crazy now, though.

First flight: On October 22, SpinLaunch used a vacuum-sealed “suborbital accelerator” taller than the Statue of Liberty to spin a 10-foot-long projectile on a rotating arm until it reached a speed in the “many thousands of miles an hour,” according to Yaney.

When released out of the accelerator’s barrel, the projectile flew to an altitude in the “tens of thousands of feet,” he said.

“SpinLaunch says its approach will be 10 times cheaper and require 4 times less fuel.”

Within the next eight months, SpinLaunch plans to conduct about 30 more tests of its suborbital accelerator in New Mexico — which was only putting 20% of its total power behind this first test flight — before building a larger orbital accelerator capable of putting satellites into orbit.

“We can essentially validate our aerodynamic models for what our orbital launch vehicles are going to be like and it allows us to try out new technologies when it comes to release mechanisms,” Yaney said.

Scaling up: SpinLaunch expects its orbital system will be able to deliver about 440 pounds (200 kg) of payload into orbit per launch — the weight of two small satellites. During those satellite launches, the projectile will coast for about a minute before splitting open. A booster affixed to the payload will then give it an extra push to guide it into its orbit.

Each payload will be a tiny fraction of what most rocket launches carry — SpaceX’s Falcon 9, for instance, can carry over 50,000 pounds (22,800 kg) to low-earth orbit.

However, SpinLaunch says its approach will be 10 times cheaper and require 4 times less fuel than what’s currently used to put payloads of its size into orbit. It also produces “zero emissions in the most critical layers of the atmosphere.”

And because the system is so cheap, they can perform a lot of launches, making up with volume what it lacks in payload size. The company is looking for a site for its orbital accelerator that can support “dozens of launches per day,” and it expects to conduct its first customer launches in late 2024.

Looking ahead: If SpinLaunch can cut the cost of putting small satellites in space, the ripple effect could be huge — microgravity gives scientists the ability to perform experiments that are impossible on Earth, and cheap access to it could lead to breakthroughs in tech, manufacturing, healthcare, and more.

SpinLaunch isn’t the only company exploring unique ways to cut the cost of getting to space, either — U.K. startup B2space is developing a balloon to carry rockets into the upper atmosphere.

Like SpinLaunch’s system, this would cut both the cost of fuel and the amount of emissions released in the lower layers of the atmosphere, suggesting the future of satellite launches might be cheaper and cleaner.