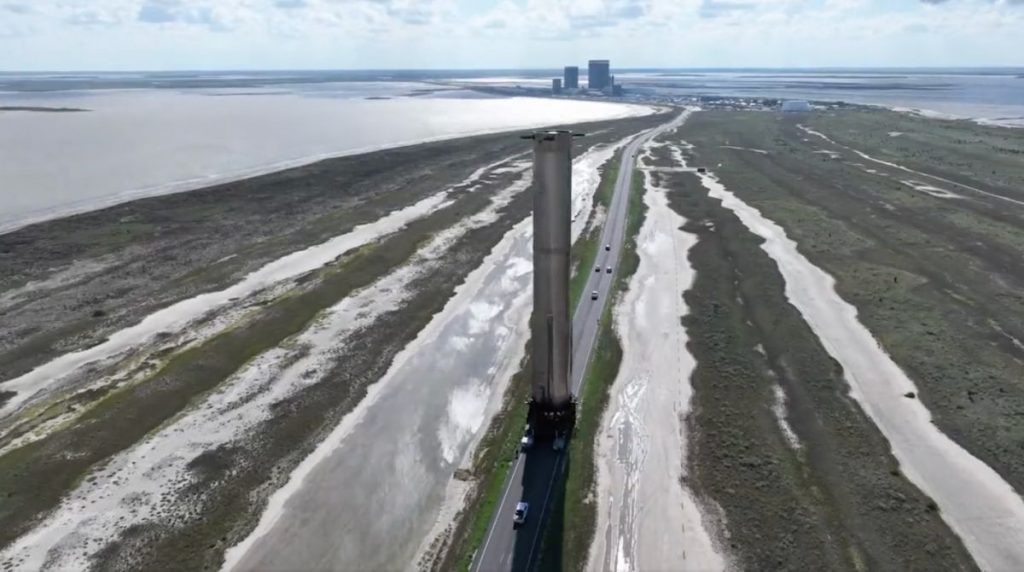 SpaceX’s Starship Mars rocket is getting some work done to gear up for its coming orbital launch attempt.

SpaceX aims to launch that test flight — the first orbital mission for the Starship program — in late October or November. It will involve Booster 7 and Ship 24, prototype versions of Starship’s Super Heavy first stage and Starship upper stage, respectively.

SpaceX has been performing “static fire” engine tests with both vehicles at its Starbase facility in South Texas over the past six weeks or so. On Monday (Sept. 19), for instance, Booster 7 ignited seven of its 33 Raptor engines, more than it had ever lit up simultaneously before.

Presumably, SpaceX will work its way up to a full 33-Raptor static fire with Booster 7 before the orbital attempt. But that ramp-up will have to wait, at least for a little while, since Booster 7 is no longer on the pad.

“Booster 7 transported back to the Starship factory for robustness upgrades ahead of flight,” SpaceX said via Twitter (opens in new tab) on Thursday (Sept. 22). The post featured a 30-second time-lapse video of the 230-foot-tall (70 meters) booster making that journey, accompanied by a fleet of cars and trucks.

SpaceX is developing Starship to carry cargo and people to the moon and, ultimately, Mars. NASA has already signed on for a lunar trip, picking Starship as the first crewed lander for its Artemis program of moon exploration. Starship will land astronauts near the lunar south pole on the Artemis 3 mission, which NASA aims to launch in 2025.

— Elon Musk says SpaceX could launch a Starship to the moon ‘probably sooner’ than 2024: report

SpaceX is also counting on Starship to launch the next version of its Starlink internet satellites, which will be much bigger and more capable than the current iteration. SpaceX aims to start launching Starlink Version 2 spacecraft, which will be able to beam service directly to smartphones, in 2023, Musk has said.

If all goes according to plan on the coming test flight, Ship 24 will make one circuit of Earth and then splash down in the Pacific Ocean near the Hawaiian island of Kauai. Booster 7 will come down in the Gulf of Mexico off the South Texas coast not long after liftoff.