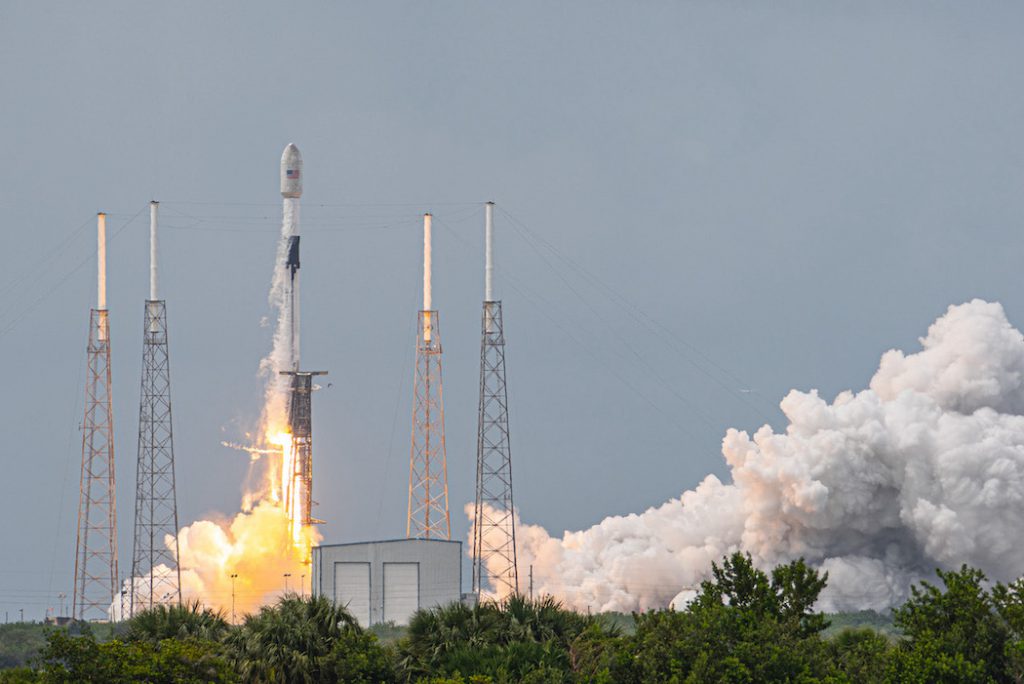 SpaceX launched a Falcon 9 rocket and 88 small satellites from Cape Canaveral Wednesday, sending the rideshare payloads on a southerly track into a polar orbit and notching the eighth successful flight of a reusable booster that debuted exactly one year ago.

SpaceX held the rocket on the ground for 35 minutes Wednesday to wait for an opening in the weather at Cape Canaveral. Scattered rain showers and storms swept across the spaceport throughout the day.

But conditions were “go” for launch at 3:31 p.m., and the 229-foot-tall (70-meter) rocket soared through the atmosphere with 1.7 million pounds of thrust from its main engines.

The first stage of the rocket shut down its engines and separated from the Falcon 9’s upper stage about two-and-a-half minutes after liftoff. The booster reversed course using a short burn with three of its engines, steering itself back to Cape Canaveral for a vertical landing about eight-and-a-half minutes into the mission.

A powerful double sonic boom accompanied the rocket’s propulsive touchdown on the concrete pad at Landing Zone 1, a few miles south of the mission’s departure point at launch pad 40.

It was the 20th landing of a Falcon booster at Cape Canaveral, and the 89th successful recovery of a Falcon rocket overall, including landings on offshore drone ships and at Vandenberg Space Force Base, California.

The booster on Wednesday’s mission, numbered B1060, completed its eighth trip to space and back with the on-target return to Landing Zone 1. The eighth flight occurred one year to the day after the rocket’s debut launch June 30, 2020, with a GPS navigation satellite.

Just as the booster settled on its four landing legs at Cape Canaveral, the Falcon 9’s upper stage shut down its single Merlin engine to reach a preliminary orbit around Earth after streaking over South Florida, Cuba, the Caribbean Sea, and Central America.

After flying over Antarctica and heading back north over the Indian Ocean, the second stage reignited its engine for a brief maneuver to reach a near-circular polar orbit at an altitude of nearly 341 miles, or 550 kilometers.

The rocket then began a 30-minute sequence to release its satellite payloads, including three space tugs that will perform their own maneuvers to deploy 41 spacecraft in the coming days and weeks.

The first satellite for Umbra, a startup based in Santa Barbara, California, also launched on the Falcon 9 rocket Wednesday. Capella Space, another radar remote sensing company, also had a small spacecraft on Wednesday’s launch.

Loft Orbital, a small company headquartered in San Francisco, launched two microsatellites named Yet Another Mission 2 and 3, or YAM 2 and YAM 3. Loft Orbital sells capacity on its satellites for payload providers, such as commercial companies, research institutions, or the military, to test out sensors, instruments, and technology.

Other companies with payloads on Wednesday’s launch included Swarm Technologies, a Silicon Valley company that is developing a low-data-rate satellite communications fleet. Swarm said it had 28 tiny SpaceBEE satellites, each about the size of a slice of bread, on the Falcon 9 rocket.

There were two NASA CubeSats on-board, too.

One of the NASA nanosatellites, named PACE 1, was developed by the Ames Research Center in California with a lightweight gamma and neutron particle detector and spectrometer, and optical and radar retro-reflectors to support orbital tracking measurements.

The other NASA mission launched Wednesday was TROPICS Pathfinder, a validation model for a fleet of six Cubesats scheduled for launch in 2022 to measure weather conditions inside tropical cyclones.

The Space Development Agency launched its first five payloads on the Transporter 2 rideshare mission. The agency was established in 2019 as part of the Department of Defense, with a goal of infusing emerging technology into the U.S. military’s space programs.

The payloads for the SDA were developed in partnership with the Defense Advanced Research Projects Agency, or DARPA, and the Air Force Research Laboratory to test laser communication and on-board data processing technologies.

A satellite for the Italian company D-Orbit also deployed from the Falcon 9 rocket Wednesday. The satellite will release six CubeSats in the coming weeks, then begin a mission performing in-orbit demonstrations of three hosted payloads.

One of the Sherpa tugs is the space industry’s first orbital transfer vehicle powered by electric thrusters. The Sherpa LTE1 vehicle has an electric propulsion system supplied by Apollo Fusion of Mountain View, California.

The final satellites to separate from the Falcon 9 rocket were three of SpaceX’s own Starlink internet satellites.

Here’s a timeline of the spacecraft separation sequence:

The Transporter 1 mission launched in January from Cape Canaveral with 143 satellites, a record number of spacecraft on a single rocket.

The Transporter 3 mission is scheduled for liftoff in December, tentatively from Vandenberg Space Force Base in California. It could also launch from Cape Canaveral. SpaceX moved the Transporter 2 mission from California to Florida earlier this year.

On its website, SpaceX says it charges customers as little as $1 million to launch a payload of 440 pounds (200 kilograms) on a dedicated rideshare flight to sun-synchronous orbit. Enabled by cost reductions from reusing Falcon 9 rocket hardware, the SpaceX prices are significantly less than the rate charged by any other launch provider for a payload of similar mass.

“These launches are very cost-efficient, the cheapest to date,” said Jeanne Medvedeva, vice president of launch services at Berlin-based Exolaunch, in an interview earlier this year.

Companies like Exolaunch reserved ports on the Transporter 1 and Transporter 2 payload stacks, then divided that capacity among multiple small satellite customers.

Wednesday’s mission was the 20th launch of a Falcon 9 rocket through the first half of 2021, putting SpaceX on pace for 40 Falcon 9 missions this year.

SpaceX had 26 launches last year, the most in the company’s history. If its near-term launch manifest remains on schedule, SpaceX could reach the 26-launch mark by late August or September.