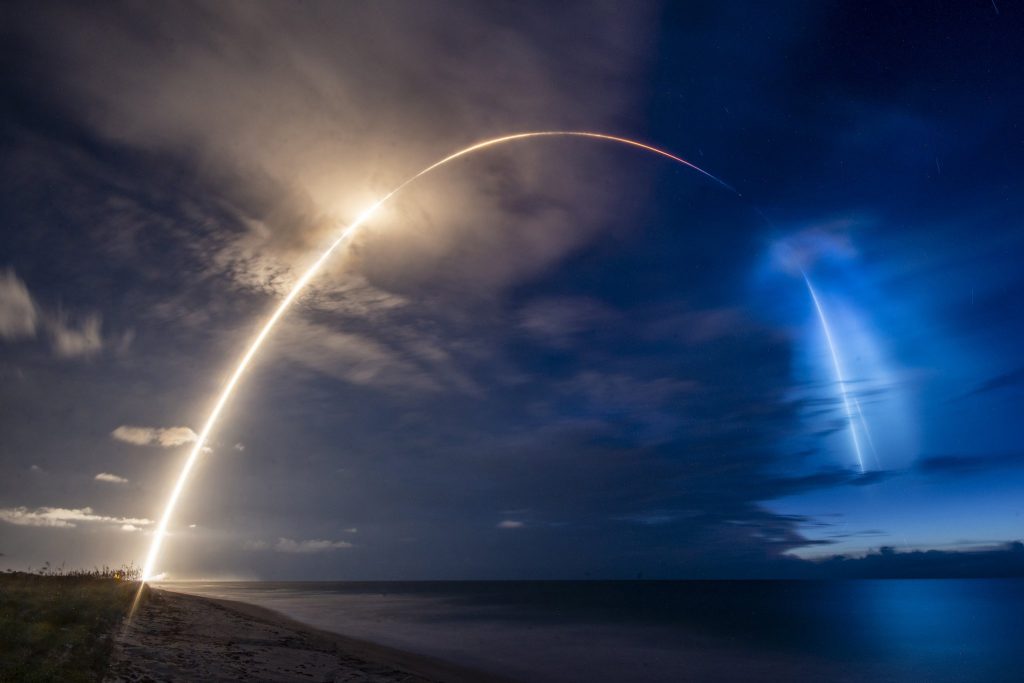 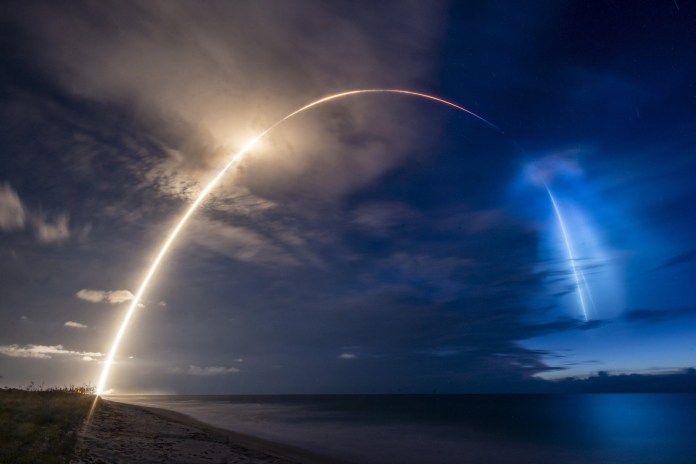 It was a mostly clear morning, with just a few clouds above the launch pad here at Space Launch Complex 40 at Cape Canaveral Air Force Station in Florida at liftoff. Onlookers were treated to an awesome view in the predawn sky — the glow from the rocket’s engines were visible well into the flight as it launched at 5:21 a.m. EDT (0921 GMT).

The exhaust from the rocket was illuminated by the sun, which was just below the horizon. The resulting cloud appeared as a nebula hanging in the sky.

“Liftoff of Falcon 9 and Starlink ocho,” a SpaceX launch commentator said, referring to the mission’s Starlink 8 in Spanish.

The launch is the second Starlink mission so far this month, with one more on the schedule for no earlier than June 22. SpaceX is taking advantage of its fleet of flight-proven Falcon 9 boosters, with plans of launching a record four times in June.

The first stage of the Falcon 9 featured in today’s mission is now a three-time flier, as it previously launched two SpaceX robotic resupply missions to the International Space Station (ISS) — CRS-19 in December 2019 and CRS-20 in March of this year.

For its third mission, the booster known as B1059 carried 58 Starlink satellites into space, bringing to 540 the number of total Starlink craft launched to date. SpaceX has plans to launch thousands of Starlink satellites, so this is only the beginning.

To that end, company founder and CEO Elon Musk has said that SpaceX will need at least 800 Starlink craft on orbit to begin providing moderate internet coverage to customers in the United States and Canada. The service will roll out to the rest of the world sometime after that. The initial Starlink megaconstellation is expected to include about 12,000 satellites.

While this mission carried the name Starlink 8 at SpaceX, it is actually the ninth flight to carry a batch of the internet satellites into orbit. The first 60-satellite launch occurred in May 2019.

A typical Starlink launch delivers 60 satellites into orbit, but this mission’s reduced numbers allowed for additional satellites to climb on board. As part of a rideshare agreement with the Earth-imaging company Planet, SpaceX launched three small SkySat satellites — a first for the Starlink program.

Planet has also booked room for three more SkySat satellites on a future Starlink mission, estimated to launch sometime this summer. However, SpaceX’s next Starlink launch will also share its payload fairing with another customer: Seattle-based BlackSky Global, which has booked a ride for two of its Earth-observing satellites.

Planet’s final six SkySats will join 15 others currently in orbit, but the newcomers will operate in different orbital planes. The original batch are flying in sun-synchronous orbit, which provides them with views of Earth’s surface that are consistently bathed in sunlight.

However, SkySats 16-21 will operate in a mid-inclination orbit of 53 degrees that offers “more targeted coverage and raw image capacity in key geographic regions,” Planet representatives wrote in a blog post.

Approximately eight minutes after its successful liftoff this morning, B1059 separated from its upper stage and proceeded to perform a series of orbital ballet moves as it reoriented itself for landing. As the rocket travelled back through the atmosphere, it conducted a series of engine burns that slowed it enough to gently touch down on a floating platform waiting in the Atlantic Ocean.

Dubbed “Of Course I Still Love You,” the massive drone ship is one of two vessels that SpaceX uses to catch its returning boosters. To date, the company has successfully recovered 54 first-stage boosters. Once they’re back in Florida’s Port Canaveral, the boosters are transported back to SpaceX facilities, where they’re carefully inspected and repurposed to fly again.

SpaceX upgraded its Falcon 9 rocket in 2018, and this iteration — known as the “Block 5” — features 1.7 million pounds of thrust as well as some other upgrades that make it capable of rapid reuse. SpaceX officials have said that each of these boosters can fly as many as 10 times with few refurbishments in between, and as many as 100 times before retirement. (To date, SpaceX has launched and landed the same booster a maximum of five times.)

SpaceX recently moved its second drone ship, “Just Read the Instructions,” to the Atlantic Ocean. The addition of a second drone ship operating in the same ocean will enable SpaceX to recover more rockets. It typically takes each drone ship two to three days to reach the landing site and then another two to three days to return to shore with the booster. If SpaceX expects to keep up its launch cadence of nearly one flight per week, we could see both ships getting a lot of action soon.

Thanks to the sheer number of satellites in orbit, SpaceX is operating the largest satellite fleet ever. Ever since its first Starlink launch, the company has come under fire from astronomers and scientists around the world over concerns that the constellation’s apparent brightness will disrupt astronomical observations.

To that end, SpaceX has been experimenting with different ways of reducing the satellites’ brightness. Musk and SpaceX have said that they will be adding special sunshades to future Starlink satellites. These will act as a visor of sorts that limits the craft’s reflectivity.

During the previous Starlink launch, SpaceX outfitted a single satellite with this new sun visor to test how it works on orbit. While this latest batch of 58 satellites does not have the sunshades installed, SpaceX has said that all future launches, beginning with Starlink 10, will have them.

SpaceX doesn’t want to stop at booster reuse. Musk has said that SpaceX aims to reuse as much of the Falcon 9 rocket as possible, including the payload fairing, which protects satellites during launch.

To that end, the company has outfitted two boats — GO Ms. Tree and GO Ms. Chief — with giant nets that will act as a mobile catcher’s mitt to snag falling payload fairings, which have historically been discarded in the ocean.

Musk has said that his company could save as much as $6 million per flight by reusing fairings, which account for roughly 10% of the rocket’s overall price tag. So, the company has outfitted its fairings with a navigation system to steer each half back to Earth and a parachute to help it gently land in either the ocean or in the outstretched nets of GO Ms. Tree and GO Ms. Chief.

To date, SpaceX has recovered several fairings and reflown recycled fairing pieces four times, including on this launch. The two clam-shelled pieces were previously used on different missions — one on the launch of a hefty communications satellite dubbed JCSAT-18/Kacific-1 in Dec. 2019, and the other on the third Starlink flight, which flew in January of this year.

SpaceX is attempting to catch the fairings today, assuming the weather cooperates. If an attempt is possible, it will occur approximately 40 minutes after liftoff.

The weather was not expected to be an issue for today’s launch attempt, as the 45th Weather Squadron estimated there to be a 30% chance of a scrub. While tricky weather is not unique here in Florida, what is unique for this mission is the team monitoring it.

The 45th Weather Squadron operates out of Florida’s Cape Canaveral Air Force Station, and is the team responsible for making the go/no-go call for liftoff. Squadron personnel determine if the weather is acceptable for launch. For the first time in the Squadron’s history, the team on console was all women.

The team, composed of three military and three civilian launch weather officers, is responsible for monitoring a myriad of issues that could potentially delay the launch. These issues include cloud height and distribution, the potential for lightning and how much electricity is in the atmosphere.

The historic event, like NASA’s recent all-female spacewalk from the ISS, occurred by happenstance. Capt. Nancy Zimmerman, the launch weather director, said that prior to 2018, there was only one female launch weather officer. Now the team is about half women and half men, so we should see this distribution happen more often.

Now that SpaceX is steadily inching closer to its goal of 800 satellites that will provide moderate coverage, the company has to get them up and running. To that end, the company has designed and gained approval for up to one million user terminals.

The hardware is simple enough that anyone can install it, according to Musk, who has said the terminals look like a “UFO on a stick.” The terminals will come with just two basic instructions — plug in and point at the sky — and are equipped with actuators that ensure they’re pointing where they should be at all times, Musk has said.

On Friday, Steve Jurvetson (co-founder of Future Ventures as well as a SpaceX and Tesla board member) tweeted about his experience with a Starlink user terminal. He described it as “the simplest out-of-the-box experience imaginable.”

SpaceX has already completed two successful missions this month, with two more flights on the docket for June: another batch of Starlink satellites as well as an upgraded GPS satellite for the U.S. Space Force.