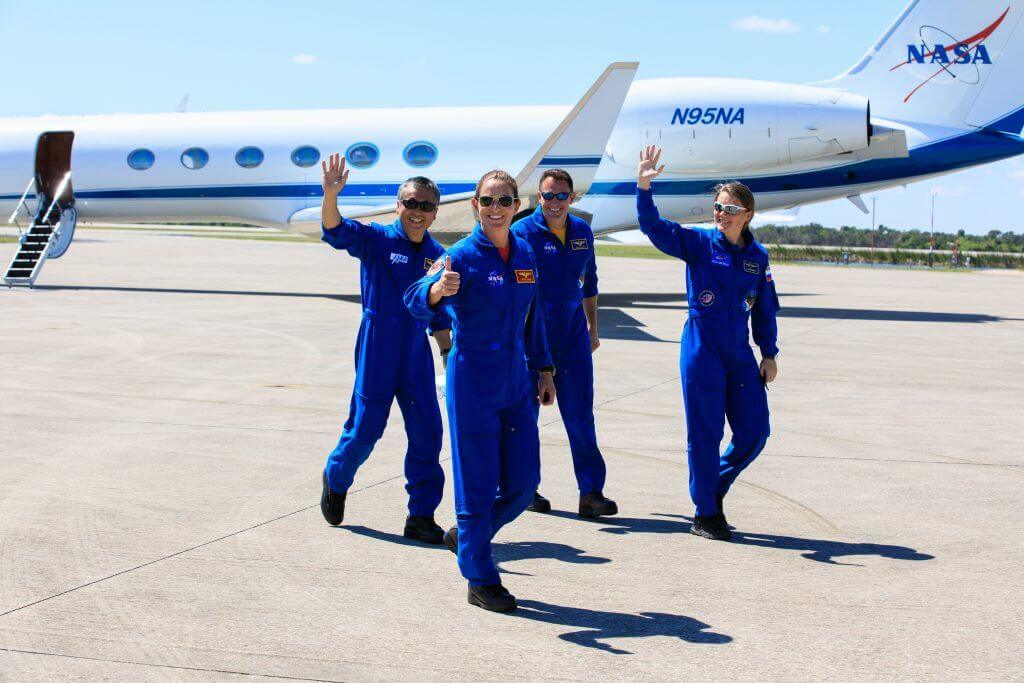 The crewmembers of SpaceX’s next astronaut mission for NASA have made it to the launch site.

That flight, called Crew-5, is scheduled to lift off from Pad 39A at Florida’s Kennedy Space Center (KSC) on Oct. 5. Preparations can ramp up further now, because the mission’s four astronauts — NASA’s Nicole Mann and Josh Cassada, Japan’s Koichi Wakata and Russian cosmonaut Anna Kikina — are on site at KSC.

The quartet arrived Saturday (Oct. 1) at about 12:15 p.m. EDT (1615 GMT), flying in from Ellington Field near NASA’s Johnson Space Center in Houston. They were originally supposed to be at KSC already; NASA and SpaceX had been targeting an Oct. 3 launch for Crew-5, but Hurricane Ian forced a two-day delay.

Photos: Astronaut looks inside eye of Hurricane Ian from space

The powerful storm also impelled NASA to roll its huge Artemis 1 moon rocket off Pad 39B and back to KSC’s Vehicle Assembly Building for protection. The pre-Ian plan was to launch Artemis 1 on Sept. 27; it now appears that the highly anticipated moon mission will likely be grounded until at least November.

The SpaceX Falcon 9 rocket and Dragon capsule that will fly Crew-5 didn’t need to roll back; they just made the trip to Pad 39A from SpaceX’s processing facility at KSC on Saturday (opens in new tab).

Crew-5 will send Mann, Cassada, Wakata and Kikina to the International Space Station for a roughly five-month stay. It’s a historic mission for several reasons: Mann will become the first Native American woman to reach space, and Kikina will be the first cosmonaut to fly to the orbiting lab with SpaceX.

Ian slammed into Florida’s southwest coast on Wednesday (Sept. 28) as a Category 4 hurricane. The storm then moved northeast, losing strength as it churned over land.

Ian hit KSC, which is on Florida’s Atlantic coast, on Thursday (Sept. 29) as a considerably weaker tropical storm. The NASA center apparently made it through the maelstrom without suffering much damage, and KSC employees went back to work on Friday (opens in new tab) (Sept. 30).

Ian powered up again upon reaching the warm waters off Florida’s eastern shore, however, and it hit the South Carolina coast as a Category 1 hurricane on Friday.