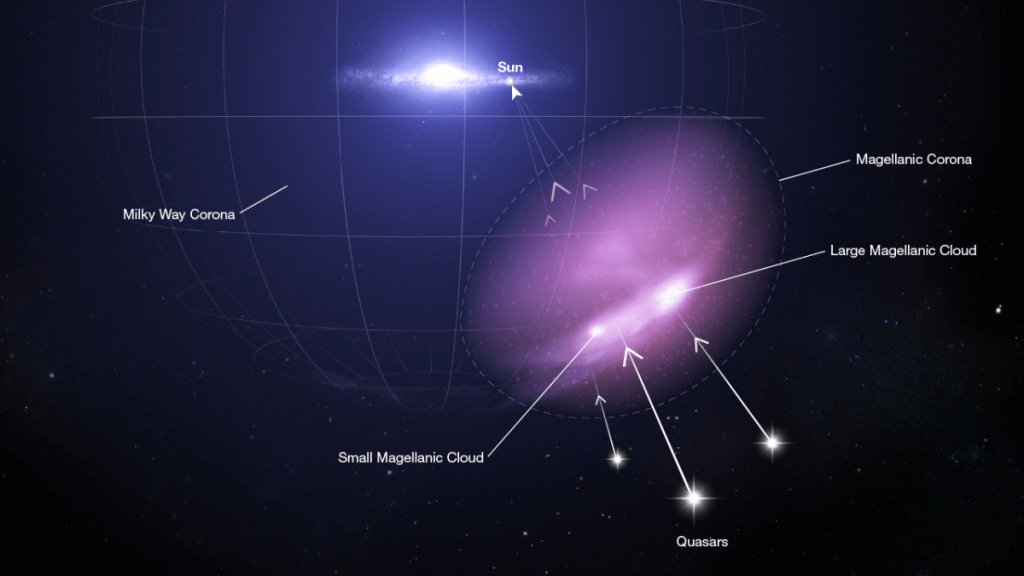 An odd shield of supercharged gas protects dwarf galaxies from being ripped apart by the gravitational pull of the Milky Way, 30 years’ worth of observations by the Hubble Space Telescope reveal.

For years, astronomers have struggled to explain why the Large and Small Magellanic Clouds, two tiny galaxies orbiting the Milky Way, still form stars. The two dwarf galaxies have been orbiting our galactic home for billions of years, research suggests, during which the gravitational force of the much more massive Milky Way has been stripping gas from the two smaller galaxies, creating a trail in their wake. In theory, this gas loss should quench star birth, but the small satellite galaxies have still managed to maintain vigorous star formation.

“A lot of people were struggling to explain how these streams of material could be there,” assistant professor at Colorado College, Dhanesh Krishnarao, said in a statement. “If this gas was removed from these galaxies, how are they still forming stars?”

This has led astronomers to theorize that the Large and Small Magellanic Clouds may be protected by a cosmic “shield” — called the Magellanic Corona — made up of supercharged gas with temperatures of half a million degrees.

Thus far, observational evidence of the Magellanic Corona has been elusive, but new research based on 30 years’ worth of observations by the Hubble Space Telescope and the now retired Far Ultraviolet Spectroscopic Explorer (FUSE) satellite may have changed that situation.

When analyzing the data, Krishnarao and his colleagues found that the Large and Small Magellanic Clouds — collectively known as the Magellanic system — are indeed surrounded by a shield of hot supercharged gas which cocoons the dwarf galaxies preventing their star-forming gas from being siphoned away by the Milky Way. This, in turn, helps them continue forming stars.

“Galaxies enveloped themselves in gaseous cocoons, which act as defensive shields against other galaxies,” Andrew Fox, an astronomer at the Space Telescope Science Institute in Maryland, who was part of the team, said in the statement.

This cosmic shield has been difficult to detect because despite stretching from the Magellanic system for 100,000 light-years, the Magellanic Corona is almost invisible. If it weren’t it would cover a huge portion of the southern sky.

The team thinks that galactic coronas like the freshly discovered Magellanic Corona are the remains of primordial clouds of gas that undergo gravitational collapse and form galaxies. These coronas have been spotted around other galaxies, but have never been seen around one so close to the Milky Way and thus in such detail.

“There’re lots of predictions from computer simulations about what they should look like, how they should interact over billions of years,” said Krishnarao. “Observationally we can’t really test most of them because dwarf galaxies are typically just too hard to detect.”

Searching through the Hubble/Fuse data, the astronomers were specifically looking for ultraviolet observations of quasars located billions of light-years behind the Magellanic Corona.

At the heart of many galaxies are active galactic nuclei (AGNs), some of which are quasars powered by supermassive black holes feeding on gas. As they swallow this material the black holes emit so much energy that they shine brighter than all the stars in their respective galaxy combined.

The team therefore reasoned that the invisible corona shielding the galaxy in the foreground (from the observer’s point of view) should make itself apparent by the effect it has on the quasar’s light shining through it, appearing as a distorting fog obscuring and absorbing distinct patterns of bright light from the background quasars.

The astronomers looked at patterns in the ultraviolet light from 28 different quasars which allowed them to characterize the material surrounding the Large Magellanic Cloud.

The light spectrum from the quasars was found to contain the elemental ‘fingerprints’ of carbon, oxygen, and silicon in a halo of hot plasma surrounding the Large Magellanic Cloud indicating the presence of the Magellanic Corona.

“It’s a perfect telltale signature that this corona is really there. It really is cocooning the galaxy and protecting it,” Krishnarao said.

The astronomer also explained how a thin cloud of gas could shield a galaxy.

“Anything that tries to pass into the galaxy has to pass through this material first, so it can absorb some of that impact,” he said. “In addition, the corona is the first material that can be extracted. While giving up a little bit of the corona, you’re protecting the gas that’s inside the galaxy itself and able to form new stars.”

The team’s research is published in the Sept 28 edition of the journal Nature (opens in new tab).