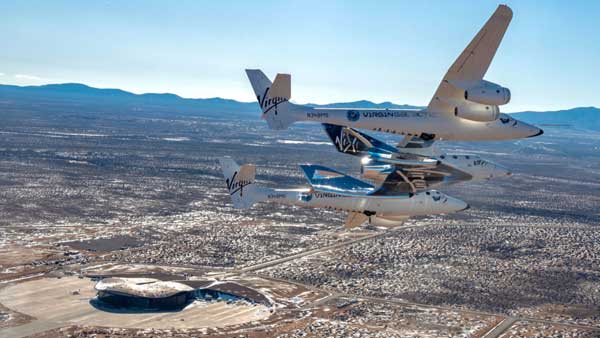 This week BigBear.ai sells more stock, management is shaken up at three space SPACs, Momentus signs a contract with FOSSA, Planet Labs teams with NASA to mitigate global food shortages, and Virgin Orbit’s price target gets cut in half after launch failure.

“The warrants will become exercisable six months after issuance, have a term of five years from the initial exercise date and an exercise price of $2.39 per share. The offering is expected to close on or about January 19, 2023, subject to the satisfaction of customary closing conditions,” the company said.

“The gross proceeds from the private placement are expected to be approximately $25 million before deducting the placement agent fees and other offering expenses payable by the Company. The Company intends to use the net proceeds from this offering for general corporate purposes, including working capital,” BigBear.ai added.

“Peter Mabson, who previously served as CEO of Spire Maritime following the acquisition of exactEarth in November 2021, has been named CSO [chief sales officer] of Spire Maritime,” the company said. “Mr. Mabson will focus on the execution of long-term strategy for the business, including product innovation and development as well as fostering strategic partnerships.

Prior to joining Spire, Mabson served as president and CEO of exactEarth for more than 13 years.

“The combination of John’s business acumen and Peter’s decades of experience in space solutions and the maritime industry is powerful and exactly what we need as we continue to scale and drive innovation in delivering customers actionable maritime data solutions that have a meaningful impact on businesses and the planet,” said Spire CEO Peter Platzer.

With flight tests about to restart after an 18-month gap and commercial tourism launches scheduled for the second quarter, Virgin Galactic (NYS: SPCE) has ‘evolved’ its management team with the departure of its president of aerospace systems, Swami Iyer. He left the position on Jan. 12, but will stay on as an advisor to CEO Michael Colglazier until March 3. Iyer joined the company in March 2021.

“With the completion of the enhancement program for our mothership at hand, our streamlined leadership structure will help propel the business forward as we prepare for commercial spaceline operations,” said Colglazier. “Swami has been instrumental in establishing our future production strategy and in leading the work to prepare our initial ships for commercial flight, and we are incredibly grateful for his contribution. Our experienced leadership team brings deep expertise to the next exciting phase for the Company — flying our customers safely and regularly to space and expanding our future fleet.”

Virgin Galactic said it plans to begin ground tests this week of the WhiteKnightTwo carrier aircraft VMS Eve to verify modifications made to the 15-year old ship since the last time it dropped the VSS Unity spacecraft on a flight test on July 11, 2021. The company also said commercial flights are “on track” for the second quarter.

SatixFy (NYS: SATX) has named Ido Gur as its new CEO. Gur joined the company after SatixFy acquired the edge computing company, Saguna, that he led.

SatixFy’s CEO and co-founder Yoel Gat passed away in April 2022. Gur will succeed David Ripstein, who was appointed CEO in June 2022.

Gur previously served as CEO of VocalTec Communications. He has worked for more than 20 years in senior management positions in a range of communications industries.

FOSSA Systems of Spain has signed a contract for Momentus (NAS: MNTS) to deliver its newest generation of satellites, FOSSASat FEROX, to low Earth orbit on a pair of Vigoride space tugs beginning later this year.

“FOSSA Systems already has a constellation of 13 picosatellites in orbit, but this next-generation will allow us to deliver higher capacity services in a commercial manner for a wider range of applications, supporting IoT [Internet of Things] and other space-related services in areas such as communications or remote sensing,” said FOSSA Chief Executive Officer Julian Fernandez.

“This new generation of satellites provides unprecedented capabilities comparable to that of 6 – 12U satellites in a fraction of the size, mass, and cost. We are happy to reaffirm our trust in Momentus as we look at our launch plans for our initially 80-satellite constellation to support SaaS [space as a service] and dedicated satellite customers in sectors such as maritime, logistics, infrastructure, utilities or national security,” Fernandez added.

Vigoride will deliver the first group of FOSSA satellites into orbit no earlier than June as part of SpaceX’s Transporter-8 mission rideshare mission. A second mission would follow at a later date.

Planet Labs (NYS: PL) and NASA Harvest have partnered to create an assessment tool for anticipating and mitigating food shortages and famines across the world. NASA Harvest, which is the space agency’s food security and agriculture program, will use Planet Labs’ satellites and publicly available data sets to analyze food supplies.

NASA Harvest previously analyzed the impact of the Russian invasion of Ukraine on the nation’s food production using Planet Labs’ imagery. NASA Harvest and Planet Labs will now scale up the Ukraine pilot program and perform regional and global assessments of food security.

“The world’s food security is at a moment of enormous uncertainty – triggered not only by the war in Ukraine, but by many other serious challenges, especially those linked to climate,” said Planet Chief Impact Officer Andrew Zolli. “The combination of real-time satellite imagery and sophisticated analytics can illuminate many types of risks to our global food systems, helping us adapt agricultural practices, adjust global supply chains, and mitigate risks to poor and vulnerable communities.”

Canaccord Genuity halved its price target for Virgin Orbit (NAS: VORB) from $12 to $6 following the failure of the company’s failed launch from Spaceport Cornwall in England last week. Analysts believe launches might not resume until the third quarter, with reduced revenue of $120 million for the year based on six successful launches. They kept a ‘Buy” rating on the stock.

Virgin Orbit’s LauncherOne rocket failed on Jan. 9 after an anomaly caused the booster’s second stage to shut down prematurely. Nine satellites were lost in the accident. An investigation into the cause of the failure is ongoing.