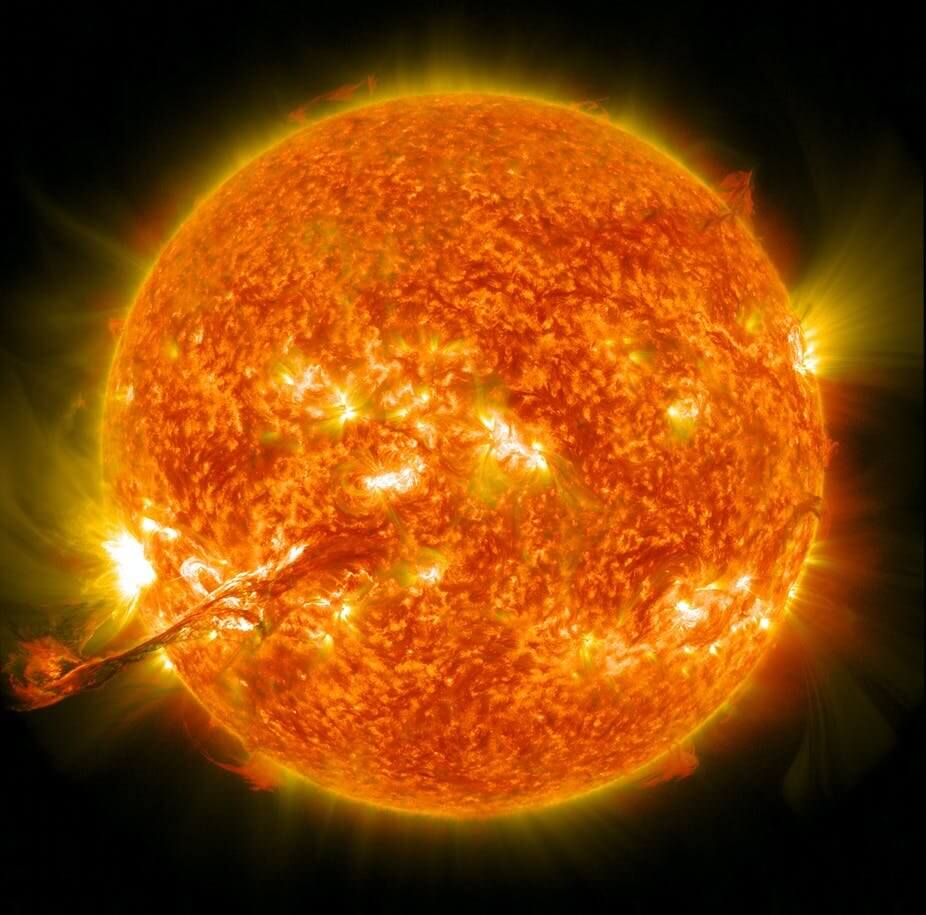 On Feb. 4, 2022, SpaceX launched 49 satellites as part of Elon Musk’s Starlink internet project, most of which burned up in the atmosphere days later. The cause of this more than US$50 million failure was a geomagnetic storm caused by the sun.

Geomagnetic storms occur when space weather hits and interacts with the Earth. Space weather is caused by fluctuations within the sun that blast electrons, protons and other particles into space. I study the hazards space weather poses to space-based assets and how scientists can improve the models and prediction of space weather to protect against these hazards.

When space weather reaches Earth, it triggers many complicated processes that can cause a lot of trouble for anything in orbit. And engineers like me are working to better understand these risks and defend satellites against them.

The sun is always releasing a steady amount of charged particles into space. This is called the solar wind. Solar wind also carries with it the solar magnetic field. Sometimes, localized fluctuations on the sun will hurl unusually strong bursts of particles in a particular direction. If Earth happens to be in the path of the enhanced solar wind generated by one of these events and gets hit, you get a geomagnetic storm.

The two most common causes of geomagnetic storms are coronal mass ejections—explosions of plasma from the surface of the sun—and solar wind that escapes through coronal holes—spots of low density in the sun’s outer atmosphere.

The speed at which the ejected plasma or solar wind arrives at Earth is an important factor—the faster the speed, the stronger the geomagnetic storm. Normally, solar wind travels at roughly 900,000 mph (1.4 million kph). But strong solar events can release winds up to five times as fast.

The strongest geomagnetic storm on record was caused by a coronal mass ejection in September 1859. When the mass of particles hit Earth, they caused electrical surges in telegraph lines that shocked operators and, in some extreme cases, actually set telegraph instruments on fire. Research suggests that if a geomagnetic storm of this magnitude hit Earth today, it would cause roughly $2 trillion in damage.

Emissions from the sun, including the solar wind, would be incredibly dangerous to any life form unlucky enough to be directly exposed to them. Thankfully, Earth’s magnetic field does a lot to protect humanity.

The magnetosphere can absorb most of the energy from the everyday level of solar wind. But during strong storms, it can get overloaded and transfer excess energy to the upper layers of Earth’s atmosphere near the poles. This redirection of energy to the poles is what results in fantastic aurora events, but it also causes changes in the upper atmosphere that can harm space assets.

Dangers to what’s in orbit

When the atmosphere absorbs energy from magnetic storms, it heats up and expands upward. This expansion significantly increases the density of the thermosphere, the layer of the atmosphere that extends from about 50 miles (80 kilometers) to roughly 600 miles (1,000 km) above the surface of the Earth. Higher density means more drag, which can be a problem for satellites.

This situation is exactly what led to the demise of the the SpaceX Starlink satellites in February. Starlink satellites are dropped off by Falcon 9 rockets into a low-altitude orbit, typically somewhere between 60 and 120 miles (100 and 200 km) above the Earth’s surface. The satellites then use onboard engines to slowly overcome the force of drag and raise themselves to their final altitude of approximately 350 miles (550 km).

The latest batch of Starlink satellites encountered a geomagnetic storm while still in very low-Earth orbit. Their engines could not overcome the significantly increased drag, and the satellites began slowly falling toward Earth and eventually burned up in the atmosphere.

Drag is just one hazard that space weather poses to space-based assets. The significant increase in high-energy electrons within the magnetosphere during strong geomagnetic storms means more electrons will penetrate the shielding on a spacecraft and accumulate within its electronics. This buildup of electrons can discharge in what is basically a small lightning strike and damage electronics.

Penetrating radiation or charged particles in the magnetosphere—even during mild geomagnetic storms—can also alter the output signal from electronic devices. This phenomenon can cause errors in any part of a spacecraft’s electronics system, and if the error occurs in something critical, the entire satellite can fail. Small errors are common and usually fixable, but total failures, though rare, do happen.

This, for example, makes it difficult to lock onto GPS signals and can throw off the positioning by a few meters. For many industries—aviation, maritime, robotics, transportation, farming, military and others—GPS positioning errors of a few meters are simply not tenable. Autonomous driving systems will require accurate positioning as well.

How to protect against space weather

Satellites are critically important for much of the modern world to function, and protecting space assets from space weather is an important area of research.

Some of the risks can be minimized by shielding electronics from radiation or developing materials that are more resistant to radiation. But there is only so much shielding that can be done in the face of a powerful geomagnetic storm.

The ability to accurately forecast storms would make it possible to preemptively safeguard satellites and other assets to a certain extent by shutting down sensitive electronics or reorienting the satellites to be better protected. But while the modeling and forecasting of geomagnetic storms has significantly improved over the past few years, the projections are often wrong. The National Oceanic and Atmospheric Administration had warned that, following a coronal mass ejection, a geomagnetic storm was “likely” to occur the day before or the day of the February Starlink launch. The mission went ahead anyway.

The sun is like a child that often throws tantrums. It’s essential for life to go on, but its ever-changing disposition make things challenging.

SpaceX satellites falling out of orbit after solar storm

This article is republished from The Conversation under a Creative Commons license. Read the original article.

Citation:
Solar storms can destroy satellites with ease: A space weather expert explains the science (2022, March 3)
retrieved 11 March 2022
from https://phys.org/news/2022-03-solar-storms-satellites-ease-space.html
This document is subject to copyright. Apart from any fair dealing for the purpose of private study or research, no
part may be reproduced without the written permission. The content is provided for information purposes only.