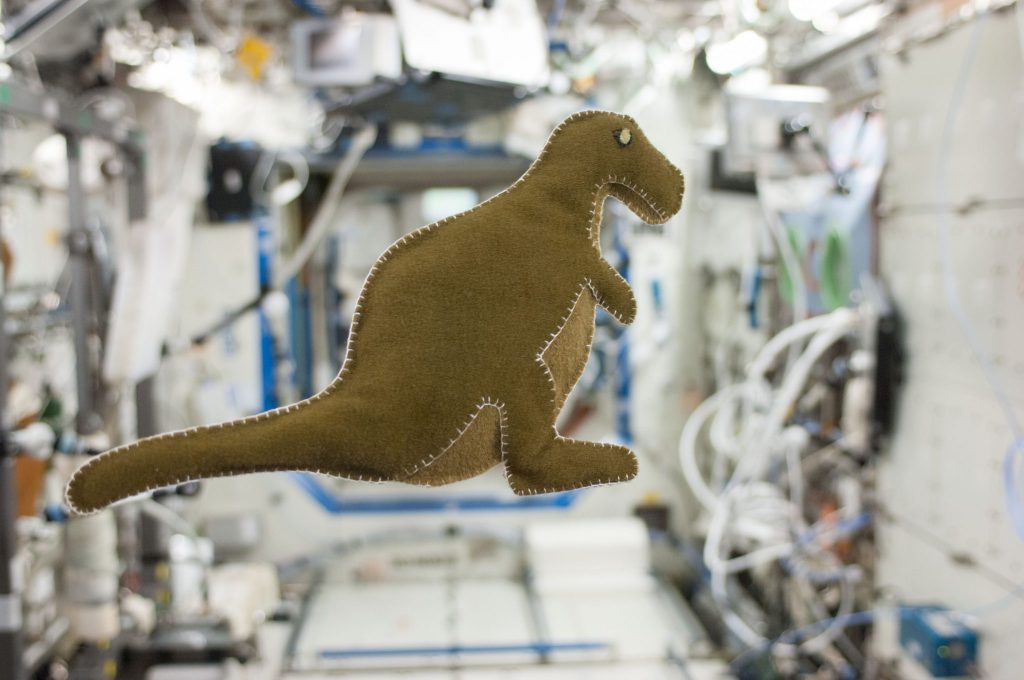 After a lifetime making clothes during her spare time at home, Karen Nyberg experimented with sewing in space in 2013 and found some challenges.

The NASA astronaut didn’t have time to procure sewing shears before leaving Earth, so she needed to use ordinary scissors on the International Space Station to cut fabric, making precision more difficult. The fabric would float during cutting, so she would force it in place using a cardboard piece and her fingers.

On top of that was time pressure, Nyberg said in an interview, as she was helping her Expedition 36/37 crew manage a couple of hundred experiments and normal maintenance. Even Saturday mornings were more packed than she expected: “Even then, we did housekeeping in the morning, and we had exercise,” Nyberg recalled, noting a typical exercise period was about two hours to make sure bones and muscles were still strong after a six-month stay in microgravity.

But the payoff was worth it. Nyberg’s Space Quilt Challenge, which she promoted while in orbit, attracted 2,000 entries from all over the world – including 81 Canadians. The audience was largely women who may not ordinarily think about space as a career or even a hobby, Nyberg said.

Nyberg sent daily space videos from orbit to her son, Jack, who was only three years old at the time. Usually, Nyberg recalled, kids lucky enough to talk with her in space really notice things floating; a 2013 NASA YouTube video showing how she washed her hair in space attracted more than 5.5 million views as of this writing, for example.

Jack, however, seemed to accept floating as normal. “It wasn’t that big a deal anymore, because he did see it a little bit every day,” said Nyberg, noting Jack saw a lot of his parents working in microgravity as she is married to astronaut Doug Hurley.

That said, Nyberg did make an impression on Jack after making a stuffed dinosaur in space and sending pictures of it to her son. Jack, now 11 years old, still plans a career as a paleontologist.

The floating dinosaur also served as the inspiration for the new clothing, as it shows four different dinos hovering in front of the famous panoramic Cupola window on the space station installed three years before Nyberg’s flight. “I don’t really remember how the toy dinosaur came up,” Nyberg said. “I just started doodling some dinosaurs, and I had several iterations of that until I finally got to the one with the four dinosaurs and then, the Cupola window.”

Svaha Apparel founder Jaya Iyer was born and raised in India and immigrated to the United States about 20 years ago, she said in a separate interview. Her new hometown of Dulles, Virginia, then opened up a new branch of the Smithsonian Institution’s National Air and Space Museum called the Steven F. Udvar-Hazy Center in 2003, and she would bring her kids there often.

The center’s big advantage over the more famous downtown facility is it has room for huge aircraft, like a Lockheed SR-71 Blackbird and the Enola Gay. Iyer’s kids loved the place, but she said it was difficult to find any space-themed items for girls at any store. Usually, she would be forced to shop in the boys’ section.

“I thought that was such a bad example for my daughter, saying ‘I’m sorry, girls are not supposed to be astronauts … that’s not something they would ever aspire to be,’” Iyer said. “That was the beginning of me thinking, ‘Hey I need to do something about this.’ That’s when I decided to start my clothing line.”

Iyer, then a maker for the nerd collectible site ThinkGeek, started Svaha Apparel six years ago with clothing for adults and children — clothing that is deliberately classified by age group and not by gender, to make her wares as inclusive as possible. Today, the company employs four full-time and four part-time employees, and periodically associates itself with organizations such as the Association for Women in Science to promote inclusivity in the STEM community.

Iyer’s collaboration with Nyberg came after the clothing apparel founder was browsing Nyberg’s posts on social media – and found out about the floating dinosaur in space. “I saw that she was creative, and so I got in touch with her PR person saying, ‘I would love to do something together,’ ” Iyer recalled.

Both Nyberg and Iyer said there may be room for the collaboration to grow at Svaha Apparel. Nyberg is also working with a company called Robert Kaufman Fabrics — a quilting fabric maker — to create novelty fabrics with characters on it, for a new line called “Earth Views” based on the pictures she took from the space station.

“I would love to continue coming up with new ideas and maybe … not even just working with another company. Maybe just doing my own company,” Nyberg said.

“When I was growing up,” she added, “I spent so much time sewing and drawing and doing crafts. That’s what I did in my spare time. I wasn’t a huge science fiction reader or space toy person. I loved being an astronaut, but I think this was actually more of a passion for me.”