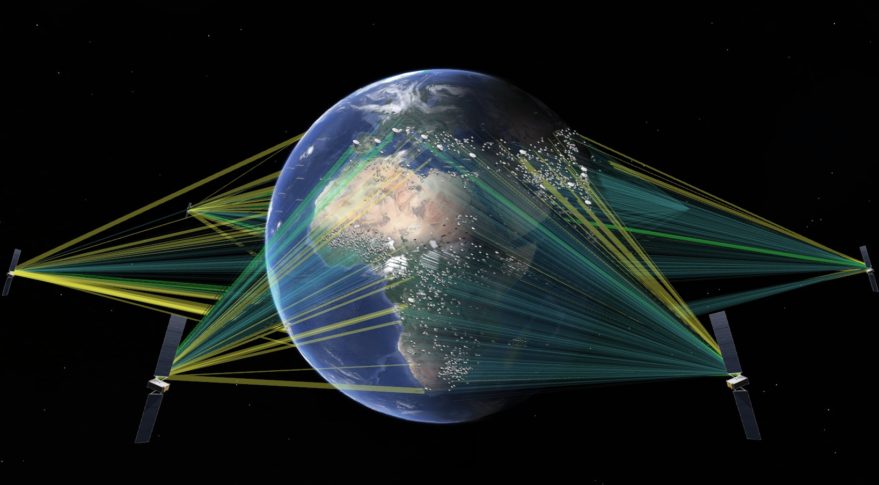 “We think we have something special,” said Ruy Pinto, SES chief technology officer, referring to the constellation of 11 O3b mPower satellites destined for medium-Earth orbit. “This second generation of MEO satellites, it’s that holy grail of complete configurability.”

Each of the 11 satellites in the O3b mPower constellation can generate up to 5,000 spot beams. While SES is not likely to need that many, the company appreciates the flexibility provided by the satellite’s software-defined payload.

Flexibility is increasingly important to satellite operators, given the complex regulatory environment and spectral interference issues they face, said Ryan Reid, president of Boeing Commercial Satellite Systems International. Fleet operators need to be “able to control and fine tune with a high degree of precision and at a very rapid pace where power is being distributed or where power is not being distributed,” he added.

All 11 O3b mPower satellites are scheduled to launch in the next year. The first eight will launch in pairs on four SpaceX Falcon 9 rockets. The final three will share another Falcon 9.

After launch, it will take approximately five months for each O3b mPower satellite to propel itself to its designated orbit and an additional month for commissioning.

The discussions that prompted Boeing and SES to work together on the O3b mPower constellation began in 2016.

SES, one of the world’s largest satellite fleet operators, sought a fundamentally different approach to satellite communications. The Luxembourg-based company wanted to integrate satellites with a network that could dynamically reconfigure power and bandwidth to provide fiber-like connections anywhere in the world.

“That really becomes an extension of the ground software to provide complete flexibility in whatever dimension flexibility needs to be provided,” Reid said.

During development and manufacturing of the O3b mPower constellation, more than 10 SES engineers have been co-located at the Boeing satellite factory.

“They were not here just looking over someone’s shoulder to say, “Did you tick that box,’” Pinto said. “They have been driving the design and the configuration and how we are going to deploy that.”

Meanwhile, SES was working with industry partners to update ground networks and create Adaptive Resource Control, software that links SES satellites in geostationary (GEO) and medium-Earth orbit with terminals and gateways on the ground.

“We are trying to make it API-driven,” Pinto said. “So, if we buy another GEO or if we partner with a [low-Earth orbit] constellation, we can just plug that in. You plug platforms, constellations or satellites in.”

Recent shifts in the government and commercial markets have underscored the need for flexibility.

“What we have been through the last few years with the pandemic and the conflict in Ukraine has just highlighted some changes in the way we look at space,” Pinto said. “These trends were there before but they have accelerated over the last few years.”

Governments around the world have always considered space capabilities important. Now, they look at space as being strategic, Pinto said.

On the commercial side, the satellite communications market is being disrupted by SpaceX’s Starlink broadband constellation, Amazon Project Kuiper and other companies responding to heightened demand for global, low-latency connectivity.

O3b mPower satellites can launch in pairs and a trio because of their size. The software-defined satellites, built on Boeing’s 702X platform, are much smaller than traditional geostationary communications satellites, but larger than the first generation of O3b satellites built by Thales Alenia Space.

While preparing to launch the first two O3b mPower satellites in mid-December, SES executive are looking ahead.

“We are already thinking about the third generation,” Pinto said. “What is the next stage in technological development? How do we keep ourselves relevant in terms of technology?”

Enhanced power, configurability and coverage will all be important.

SES executives are talking with satellite manufacturers about the third-generation mPower constellation ahead of a formal tender process.

“But it’s not about the call for tender, it’s about how we partner and stretch the envelope,” Pinto said. “What is it that we can deploy in three years’ time or four years’ time that will change the game again for us?”