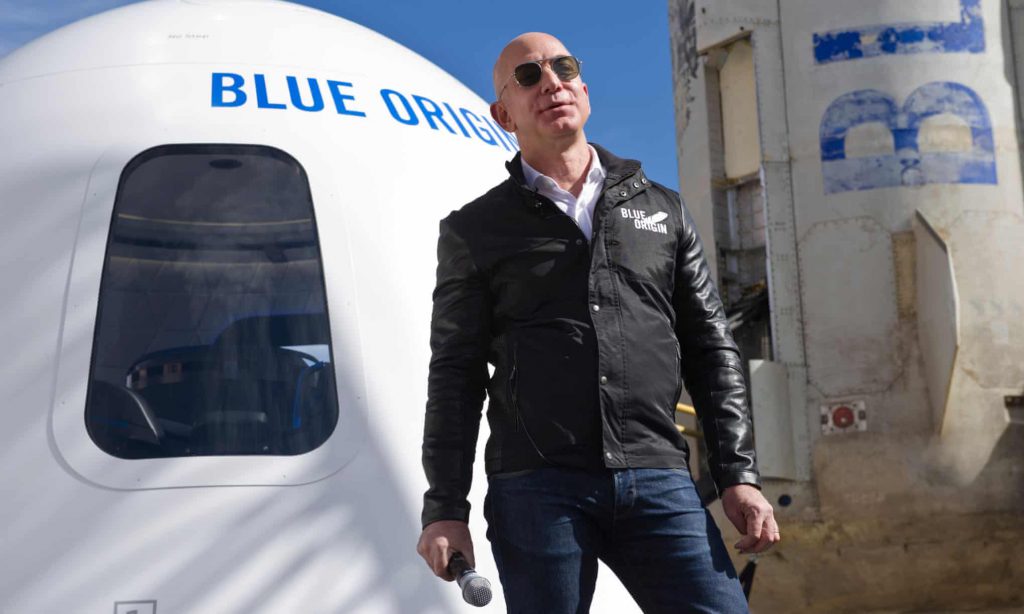 It was a week in which two space-faring billionaires tussled again in their futuristic game of cosmic oneupmanship. And this time, for once, Elon Musk was not at the party.

The declaration that Jeff Bezos, the Amazon founder and world’s richest man, was heading into space next month on the first crewed launch of his Blue Origin New Shepard rocket was followed quickly by an apparent leak from within Richard Branson’s Virgin Galactic empire that the British tycoon might look to upstage him with a Fourth of July Independence Day spectacular of his own.

Branson’s team was quick to downplay the possibility, insisting a date for his first spaceflight had yet to be determined. But beyond what some might see as vain billionaires using real-life rockets as playthings, the episode underscores how close the lucrative yet still fledgling commercial space industry has come to routinely launching paying passengers into outer space and achieving a goal two decades in the making.

On Saturday, the winner of an auction for a seat to accompany Bezos and his brother Mark on next month’s big space adventure will be announced on the Blue Origin website. On Thursday, the bidding reached $4.2m for the 11-minute round trip.

“Many congratulations to Jeff Bezos & his brother Mark on announcing spaceflight plans,” Branson said in a tweet directed at his rival. “Jeff started building @blueorigin in 2000, we started building @virgingalactic in 2004 & now both are opening up access to Space – how extraordinary! Watch this space … ”

Absent from Branson’s tweet was any mention of Musk, whose nonconformist Space Exploration Technologies Corporation – better known as SpaceX – has grown from a shaky start in 2002 to become the dominant player in the commercial space sector, and a key partner of the US space agency, Nasa. The company is already regularly flying astronauts to the international space station, and is renting out its Dragon space capsule this fall for its first private spaceflight, taking a crew of four on a three-day orbital odyssey.

With differing longer-term ambitions and goals, the three billionaires have collectively upended the traditional government-funded and directed model for human spaceflight and are shaping a thriving new commercial space era, according to Matthew Weinzierl, a Harvard Business School professor and an expert in the economics of space.

“SpaceX’s recent achievements, as well as upcoming efforts by Boeing, Blue Origin and Virgin Galactic to put people in space sustainably and at scale, mark the opening of a new chapter of spaceflight led by private firms,” he said.

“They have both the intention and capability to bring private citizens to space as passengers, tourists and eventually settlers, opening the door for businesses to start meeting the demand those people create over the next several decades.”

Weinzierl expects there to be a gradual shift from money spent in space to benefit Earth, such as investments in telecommunications and internet satellites and infrastructure, to the so-called space-for-space economy, including mining asteroids or the moon for materials that will be necessary to support human habitat and fuel deeper-space missions to Mars or beyond.

Bezos and Musk always had loftier goals in mind, even as they were taking their first tentative steps in the space industry, experts say. But their visions diverge beyond flying humans in low Earth orbit, or even suborbital flight, as Bezos’s brief July venture will be.

“Musk is totally about Mars. His passion is to get people to Mars as a backup plan to Earth, and to make humanity a multi-planet species,” said Marcia Smith, founder and senior analyst of spacepolicyonline.com.

“Bezos is interested in the moon, and in the space between Earth and the moon. He wants to move all of the heavy industry off Earth and into cislunar space. He talks about rezoning Earth for light industry and habitation.

“So they both are interested in trying to save Earth because of all the problems Earth is having, but they have very different visions as to how that’s going to happen.”

Nasa has embraced both billionaires as it pursues its own exploration programs. In April, the agency chose SpaceX to build the spacecraft to return humans to the moon for the first time since 1972, a decision Blue Origin has challenged. The enigmatic Musk reacted in typically bellicose fashion, tweeting: “Can’t get it up (to orbit) lol” in reference to Bezos’s so far unsuccessful efforts to launch a crew into space.

The operations of both companies have the potential to attract billions of dollars of investment to the US through commercial clients, and Weinzierl sees space as the “ultimate industry of the future”, though he says it may take longer than this century to reach its potential.

“The sector has changed a great deal over the last two decades, largely in that there are new competitors seeking to serve private customers in addition to governments,” he said.

“At the same time, Nasa and other public agencies are still the dominant sources of funding and specific plans for space beyond low Earth orbit, where the private satellite market has long been active. Even SpaceX, for all its success, wouldn’t be where it is without Nasa’s partnership.”

Smith argues that Musk has created his own luck to position SpaceX as the leading pioneer in the new private space market.

“Musk has really transformed the business, and brought commercial business back to the United States, by lower prices and reusability. He has really made a change,” she said.

“Bezos is trying to build this New Glenn rocket and is having setbacks with the engine.”

John Logsdon, the respected professor emeritus at George Washington University and founder of the Space Policy Institute, phrased the differences between the two tycoons another way, in a 2018 interview with the Guardian.

“I’d call it competition, and competition is the American way of life.”

As for Branson, the Virgin founder scored a major success last month when his SpaceShipTwo rocketplane reached an altitude of 55.4 miles, either in space or at the edge of it, depending on which calculation of the Karman Line, the perceived boundary of outer space, is being used. It brings his long-awaited but much-delayed aspiration of a profitable space tourism business a significant step closer to realization.

How relevant the Bezos brothers’ flight aboard New Shepard, his rocket named as a tribute to Alan Shepard, the first American in space, will be to Blue Origin’s wider ambitions is open to question, although Weinzierl, the Harvard professor, sees it as more than a publicity stunt.

“It’s about demonstrating in the most powerful way he can that he trusts in the technology,” he said.