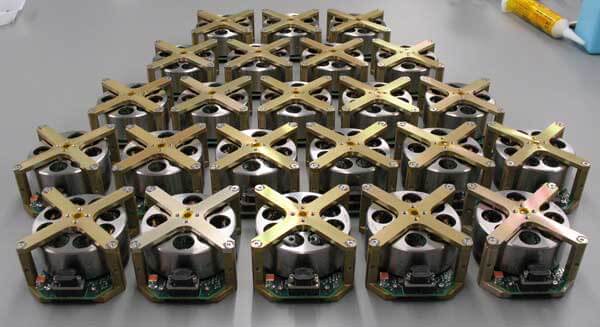 The new production facility is the latest expansion of Rocket Lab’s Space Systems business, which was strengthened in 2020 by the acquisition of Toronto-based Sinclair Interplanetary, a leading provider of high-quality, flight-proven satellite hardware including reaction wheels and star trackers. Sinclair Interplanetary pioneered high-reliability reaction wheels for small satellites and there are close to 200 wheels currently operating on orbit.

“For the longest time, spacecraft and satellite components have been built individually by highly specialized engineers with a high price tag and long wait times to match. With the rise in constellations, the demand for high-quality components and spacecraft produced at scale continues to grow and we’re addressing the bottleneck head on. Halfway through 2021, we had already surpassed the total number of satellite components produced by Sinclair annually and we’re continuing to accelerate production to meet the needs of our customers.”

Rocket Lab satellite components, including reaction wheels and star trackers, are now used in more than 200 satellites globally including industry-leading constellations BlackSky and Kepler Communications. Since acquiring Sinclair Interplanetary, Rocket Lab has added 2,700 sq/ft of production facilities to the Sinclair Interplanetary facilities in Toronto, Canada and expanded the team to support higher production volume and enable R&D for new satellite hardware and products.

Rocket Lab is a global leader in space, building rockets and spacecraft that make it easier to get to orbit and to do amazing things there. Founded in 2006, Rocket Lab provides end-to-end mission services that provide frequent and reliable access to space for civil, defense, and commercial markets. Headquartered in Long Beach, California, Rocket Lab designs and manufactures the Electron launch vehicles and Photon satellite platform and is developing the Neutron launch vehicle. Since its first orbital launch in January 2018, Rocket Lab’s Electron launch vehicle has become the second most frequently launched U.S. rocket annually and has delivered 105 satellites to orbit for private and public sector organizations, enabling operations in national security, scientific research, space debris mitigation, Earth observation, climate monitoring, and communications. Rocket Lab has two launch sites, including a private orbital launch site located in New Zealand, and a second launch site in Virginia, USA expected to be operational by the end of 2021. Rocket Lab’s Photon spacecraft platform has been selected to support NASA missions to the Moon and Mars, as well as the first private commercial mission to Venus. To learn more, visit www.rocketlabusa.com.