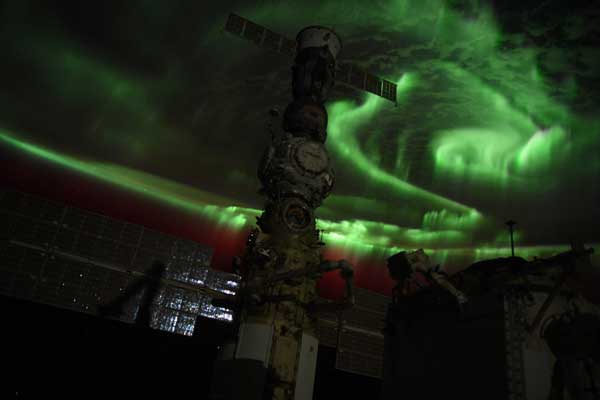 “There’s no such thing as bad weather…”

PARIS (ESA PR) — The Artemis I mission, set to launch on 29 August, will mark a significant step in humankind’s return to the Moon.

While there are no human passengers on board this test flight, future missions will once again cast space explorers beyond the protective environments of Earth’s atmosphere and magnetic field and into the realm of unimpeded space radiation.

While solar flares and small to medium-sized coronal mass ejections are unnervingly spectacular, these phenomena alone are unlikely to pose much risk to Artemis I or future crewed Moon missions.

‘Solar energetic particle events’ are the ones to watch out for. They occur when particles emitted by the Sun – mostly protons but also some ionised atoms like Helium – are sped up, accelerated to near relativistic velocities. It is these high-energy particles shot through space that can affect a spacecraft and its crew.

Solar particle events are associated with particularly big solar flares and coronal mass ejections, as it is these eruptions that can cause shockwaves that shove solar particles to dangerous speeds.

When it comes to the Artemis missions, much of the radiation from a particle event would be blocked by the walls of the space capsule – Orion and its European Service Module were designed to ensure the reliability of essential systems during radiation events.

But the event could interfere with communications between the crew and teams on Earth, and the astronauts could have to seek refuge in a makeshift storm shelter, as happened on the Space Station in September 2017.

Yet, the Space Station was still well within the protection of Earth’s ‘magnetosphere’ – a protective bubble of magnetic field that the Moon doesn’t have.

“Leaving the magnetosphere is like leaving a safe harbour and venturing out into the open ocean…”  says Melanie Heil, Segment Coordinator of ESA’s Space Weather Office.

“Radiation exposure for astronauts at the Moon can be an order of magnitude higher than on the Space Station and several orders of magnitude higher than on Earth’s surface. Future astronauts will face higher risks from solar particle events: it is very important that we study the radiation environment beyond the magnetosphere and improve our ability to predict and prepare for solar storms.”

The storms took place bang in the middle of NASA’s Apollo 16 and Apollo 17 Moon missions, with just a few months on either side. Fortunately, there were no human explorers outside the Earth’s protective magnetic field at the time. Had they encountered these storms from inside the command module, it is thought the radiation dose delivered would have caused acute radiation poisoning. For an astronaut on a spacewalk, it could be lethal.

“Reliable space weather services are a necessity for exploration and long-term habitation of the Moon,” says Juha-Pekka Luntama, ESA’s Head of Space Weather.

“A 1972-level event will happen again, and if we don’t stay vigilant, we may have astronauts in space and outside the protection of Earth’s magnetic field when it does.”

Measuring radiation at the Moon

Until now, we have mostly been concerned with the impacts of space weather on Earth’s infrastructure – power grids, communication systems, Earth-orbiting satellites and astronauts on the Space Station.

ESA’s Space Weather Service Network is spread across Europe, where experts process data from a wide range of radiation detectors onboard satellites in orbit and sensors on Earth.

With this they provide information and services to a range of ‘users’ from satellite, airline and power grid operators to aurora hunters. The Network will continue to provide its services during the Artemis I flight and report any significant space weather event, predicted or oncoming.

But for long-term human activity at the Moon, we need to monitor the lunar radiation environment directly.

Radiation research will be a major focus of the Artemis I test flight. The Orion capsule will carry radiation monitors from NASA and ESA, as well as a host of mannequins and CubeSats designed to help us better understand the radiation environment on the way to the Moon and its impact on human health.

ESA is also working on the European Radiation Sensor Array (ERSA) project – a series of devices that will provide real-time radiation monitoring on board the future crewed lunar Gateway space station.

Combining radiation measurements from the outside and inside of crewed spaces would allow researchers to see how much radiation ‘leaks’ in, and more accurately predict the risk to astronauts at the Moon when a space weather event is detected.

ESA researchers are also looking into the possibility of including radiation instruments on other uncrewed Moon orbiters, such as Lunar Pathfinder and future lunar telecommunication satellite networks.

Looking into the future

Our star can be unpredictable and temperamental, but when ‘active regions’ appear on the solar surface, they tend to remain there from days to several weeks. If we could monitor these regions even before they rotate into view of Earth, we could improve our forecasts for space weather around Earth and the Moon.

Early observation of active regions on the solar disk – from where flares and mass ejections erupt – is one of the main goals of ESA’s upcoming Vigil mission. Targeted to launch in 2029, Vigil will head to the 5th Lagrangian point (L5), a unique position in space that will allow it to see the ‘side’ of the Sun before it rotates into view from Earth.

With Vigil, advance warnings for potentially hazardous space weather events are expected to be feasible several days before they’re in a position to endanger the health of astronauts in space or infrastructure on and around Earth. This would be particularly useful information for vulnerable lunar explorers and for planning high-risk activities such as EVAs.