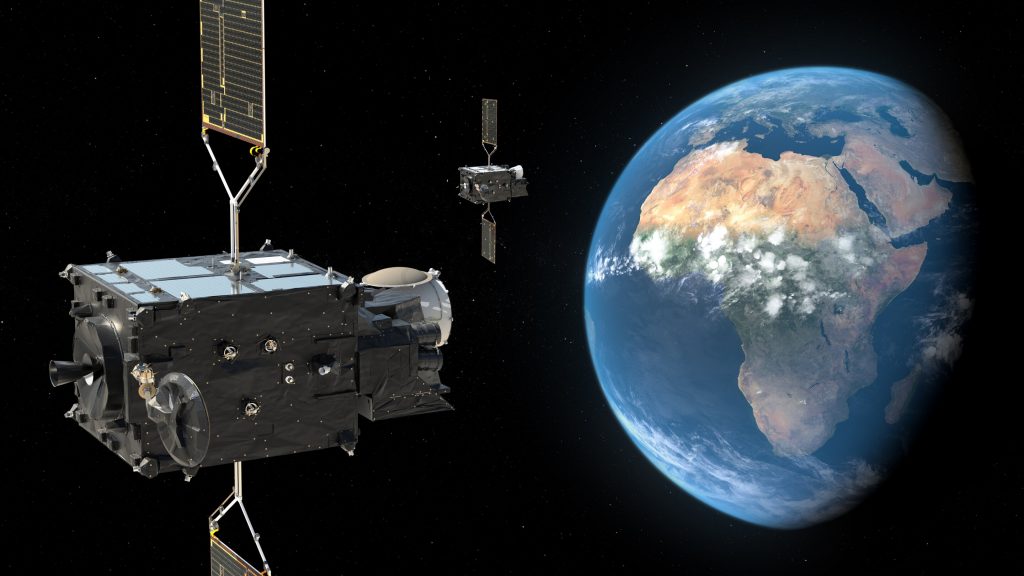 CC BY-SA 3.0 IGO‘ width=”800″ height=”450″>
To meet more than the 20-year operational life of the mission, the full Meteosat Third Generation system comprises six satellites: four Imaging (MTG-I) satellites and two Sounding (MTG-S) satellites. This image features one MTG-I satellite (in the foreground) and one MTG-S satellite. When fully deployed, the system will include two MTG-I satellites operating in tandem – one scanning Europe and Africa every 10 minutes and the other only Europe but every 2.5 minutes – and one MTG-S satellite to provide local-area coverage over selected parts of Earth, with a repeat cycle of typically five minutes. The combination of MTG’s innovative instruments along with their increased resolution and sensitivity is set to take weather forecasting to the next level, particularly in the challenging task of early detection and prediction of rapidly evolving and potentially dangerous weather events such as severe thunderstorms. The MTG-I satellites carry a Flexible Combined Imager and a Lightning Imager. The MTG-S satellites carry an Infrared Sounder and the Copernicus Sentinel-4 instrument. Credit: ESA/Mlabspace, CC BY-SA 3.0 IGO

Before Europe’s first Meteosat Third Generation Imager leaves the south of France at the end of the month aboard a ship bound for French Guiana, this remarkable new weather satellite has been taking center stage at Thales Alenia Space’s facilities in Cannes.

The satellite is in its very last stages of being checked and readied for shipment to Europe’s Spaceport in Kourou, French Guiana.

The ship, carrying the Meteosat Third Generation Imager-1 (MTG-I1) satellite, will set sail from Fos-sur-Mer near Marseille on 28 September. Once safely in Kourou, final preparations for lift off will take around seven weeks.

Before its three-week voyage across the Atlantic Ocean, MTG-I1 has been on display in the cleanroom at Thales Alenia Space, the prime contractor for the mission.

ESA’s Meteosat Program Manager, Paul Blythe, says that “it’s fabulous to see the first in the family of Meteosat Third Generation satellites almost ready to ship and this is thanks to the many people who have been working so hard to reach this point.”

From geostationary orbit, this new satellite, which boasts two new highly-sensitive instruments—a Flexible Combined Imager and a Lightning Imager—is set to take weather forecasting to the next level.

Hervé Roquet, Head of Research and Development at Météo-France, noted that they “are extremely excited about the MTG mission. It will allow us to take a major step forward in improving the prediction of severe weather events. For example, using MTG data we will be able to predict storms several hours ahead, which is key to issuing warnings for civil safety.”

The complete mission will comprise two MTG-I satellites and one MTG-S satellites working in tandem. The remaining satellites will eventually replace those in the first set.

In full operations, one of the MTG-I satellites scans the full Earth disk, including Europe and Africa, every 10 minutes, while the other provides local area coverage, for example covering only Europe but with a faster repeat cycle. The single MTG-S satellite will also provide local-area coverage over selected parts of Earth, with a repeat cycle of typically five minutes.

As climate change leads to more frequent and more severe weather events, accurate and timely weather forecasting and nowcasting is more important than ever.

The new generation of weather satellites will offer a significant enhancement of the current imager capabilities provided by the Meteosat Second Generation, a real-time lightning imaging and an all-new infrared sounding capability for early detection of severe storms.

The full MTG configuration is expected to produce at least 50 times more data than the current geostationary Meteosat Second Generation satellites and deliver these data faster. Moreover, these data will be much higher resolution that those available today.

MTG-I’s Lightning Imager offers a completely new capability for European meteorological satellites. It will continuously monitor more than 80% of the Earth disk for lightning discharges, taking place either between clouds or from cloud and ground. Its detectors are so sensitive that will be able to detect relatively weak lightning, even in full daylight.

Carlo Simoncelli, MTG Lightning Imager Program Manager at Leonardo Space, explained that “the recipe for the lightning imager is largely based on ‘good eyes’ because we need excellent optics to detect even very small lightning signals and ‘good brains’ because we need something approaching artificial intelligence that adapts how it detects lightning depending on different scenarios.”

“The lightning imager is able to detect ‘blink of the eye’ lightning signals that last as little as 6 milliseconds—and from a distance that equates to watching your favorite program 3 kilometers away from your television set.”

With shipment to the launch site just a few weeks away, MTG-I1 will soon be carefully packed away safely in its transport container.

Pierre Armand, MTG Program Manager at Thales Alenia Space, commented that “as prime contractor, Thales Alenia Space has led 100 companies and involved more than 200 contracts in the build of MTG-I1. Of course we had to adapt our way of working owing to the COVID pandemic, which was challenging. I’m incredibly proud that everyone worked so hard in these difficult times to get to where we are today and we now see the satellite almost ready to be shipped off to the launch site.”

“There’s still work to do in Kourou but we are certainly ready for this last step and eager to see it liftoff to begin its task in orbit.”

The MTG mission is a cooperation between ESA and Eumetsat. ESA is responsible for the definition and implementation of the MTG satellites and procurement of recurrent hardware, while Eumetsat is in charge of operating the spacecraft throughout its lifetime and delivering the data to the users.

Alexander Schmid, MTG Program Manager at Eumetsat, said that they “are excited about the shipment of MTG-I1 and the launch, and then for Eumetsat to take over operations, test and commission it over the next year and disseminate the data for users.”

“We have been working with the user community for several years to help prepare them for the new MTG data. This has involved running special simulation campaigns and providing them with test data so that their systems are ready—all to improve weather forecasts for the benefit of the public.”

Citation:
Preparing the MTG-I1 weather satellite for launch (2022, September 9)
retrieved 10 September 2022
from https://phys.org/news/2022-09-mtg-i1-weather-satellite.html
This document is subject to copyright. Apart from any fair dealing for the purpose of private study or research, no
part may be reproduced without the written permission. The content is provided for information purposes only.