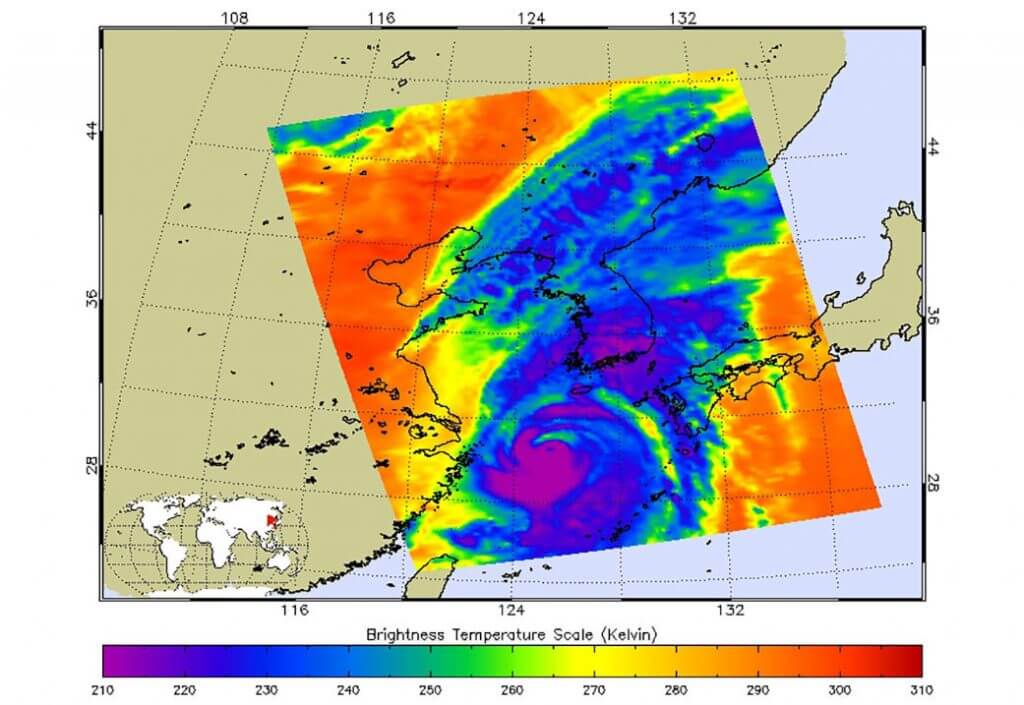 NASA’s Atmospheric Infrared Sounder (AIRS) instrument aboard the Aqua satellite captured imagery of Typhoon Hinnamnor in the West Pacific Ocean just before 2 p.m. local time on Sept. 5. Typhoon Hinnamnor was one of the strongest in South Korea’s recorded history, dropping some 40 inches (102 centimeters) of rain and unleashing record winds.

In an infrared image from AIRS, the typhoon can be seen moving northward over the Korean Peninsula, with the coast of China to the west and the southernmost Japanese islands to the east. The large purple area of the image indicates very cold clouds at about minus 90 degrees Fahrenheit (minus 67 degrees Celsius), carried high into the atmosphere by deep thunderstorms. These storm clouds are associated with heavy rainfall. The image’s extensive areas of red beyond the storm indicate temperatures of around 80 F (26 C), typical of Earth’s daytime surface during late summer. These areas are mostly cloud-free, with the clear air caused by air motion outward from the cold clouds in the storm center then downward in the surrounding areas.

U.S. Hurricane Hunter planes don’t monitor the vast expanse of the Pacific Ocean, so AIRS and other satellite instruments are essential for tracking typhoons as they grow. AIRS, launched in 2002, was the first instrument to reveal the 3D distribution of rain within tropical storms like Hinnamnor. These 3D images have made a major contribution to knowledge of how hurricanes and typhoons develop, improving forecasts and saving lives.

One of six instruments aboard Aqua, AIRS provides data that is improving weather forecasts and advancing our understanding of Earth’s climate. AIRS, along with its partner microwave instrument the Advanced Microwave Sounding Unit, AMSU-A, was a generational advancement in atmospheric sounding systems at its launch and has provided two decades of high-quality atmospheric observations. These instruments are part of NASA’s larger Earth observing fleet, which works to measure components of the global water and energy cycles, climate variation and trends, and the response of the climate system to increased greenhouse gases.

AIRS, in conjunction with AMSU-A, senses infrared and microwave radiation emitted from Earth to provide a 3D look at the planet’s weather and climate, making observations down to Earth’s surface. With more than 2,000 channels sensing different regions of the atmosphere, the system creates a global, 3D map of atmospheric temperature and humidity, cloud amounts and heights, greenhouse gas concentrations, and many other atmospheric phenomena. AIRS is managed by NASA’s Jet Propulsion Laboratory in Southern California, a division of Caltech.

Citation:
NASA’s AIRS instrument records Typhoon Hinnamnor before landfall (2022, September 9)
retrieved 10 September 2022
from https://phys.org/news/2022-09-nasa-airs-instrument-typhoon-hinnamnor.html
This document is subject to copyright. Apart from any fair dealing for the purpose of private study or research, no
part may be reproduced without the written permission. The content is provided for information purposes only.