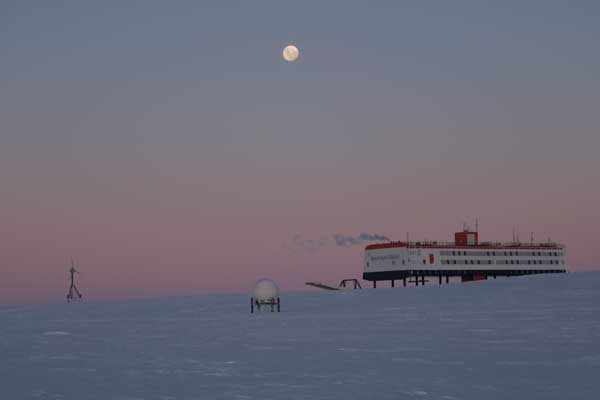 When plant scientist Jess Bunchek leaves Antarctica in the coming weeks and returns to her roots at NASA’s Kennedy Space Center in Florida, she will bring back knowledge to benefit space exploration along with memories that will last a lifetime.

Bunchek spent the last year living and working with fellow researchers at the remote German Neumayer III Station, operated by the Alfred Wegener Institute (AWI). There, she grew fresh fruits and vegetables in the German Aerospace Center’s (DLR) EDEN ISS greenhouse. Ten polar explorers spent the winter isolated there – a process they call overwintering – and the experience serves as an analog to conditions astronauts will face during long-duration space travel, such as a mission to Mars.

Bunchek’s research will help inform NASA’s efforts to feed astronauts in space as part of the agency’s interest in human health, life support, and habitations systems. Her work also furthered DLR’s goal of validating the greenhouse for advancing agriculture technologies in controlled environments.

“Extreme cold, raging storms, and polar night make the Antarctic one of the most fascinating habitats on our planet, and these qualities also make it an ideal test site for growing vegetables under space-like conditions,” said Dr. Tim Heitland, former Neumayer station leader and medical coordinator at Alfred Wegener Institute, Helmholtz Centre for Polar and Marine Research.

The greenhouse is a standalone structure located about a quarter mile (400 meters) south of the Neumayer station. Bunchek and her crewmates had to learn to be flexible and work around storms, frigid temperatures, and unanticipated technical issues.

During the last year, there were a few major storms, including one that had the highest winds ever recorded in the area. When storms were strong enough, Bunchek sheltered in place at the station and could not venture outside for the walk to the greenhouse to check on the plants.

Since the mobile container-sized greenhouse was shipped to Antarctica in October 2017, the facility has been growing a wide range of fresh produce to supplement the diets of the overwintering crew.

“There’s a complementary relationship between the Neumayer station and EDEN ISS greenhouse; the plant researchers draw on the station’s resources, and the other scientists there are thrilled by the regular supply of fresh vegetables,” Heitland said.

“When working with plants intended for the International Space Station, we have to consider the unique growing conditions that make crop production especially challenging there, such as the higher concentration of carbon dioxide on the station, microgravity versus Earth’s gravity, and how fluids like air and water act differently in space,” Bunchek said.

Other crops grown at EDEN ISS added variety to the researchers’ diets, such as Red Robin tomatoes, cucumbers, beans, peas, radishes, kohlrabi, and a host of other leafy greens. Bunchek also helped add flavor to the menu through a range of herbs including mint, basil, parsley, chives, rosemary, thyme, and oregano.

“The EDEN ISS greenhouse is a unique research platform,” said Daniel Schubert, EDEN ISS project manager at DLR. “In collaboration with NASA, DLR’s EDEN research initiative is well on its way to significantly pushing the boundaries and understanding of food production in a hostile environment.”

Bunchek also collected feedback from the overwintering team about the psychological benefits that isolated people gain from eating fresh fruits and vegetables and interacting with plants. The survey was similar to one conducted with the space station astronauts about growing crops in the Vegetable Production System, or Veggie while in orbit.

“We can now compare the survey responses from space station crew as they interact with plant production systems with those of the Antarctic overwintering crew members interacting with EDEN,” Bunchek said. “With a small overwintering crew and long isolation period, Neumayer is a great space analog setting for this kind of study.”

Bunchek plans to depart the station in early 2022.