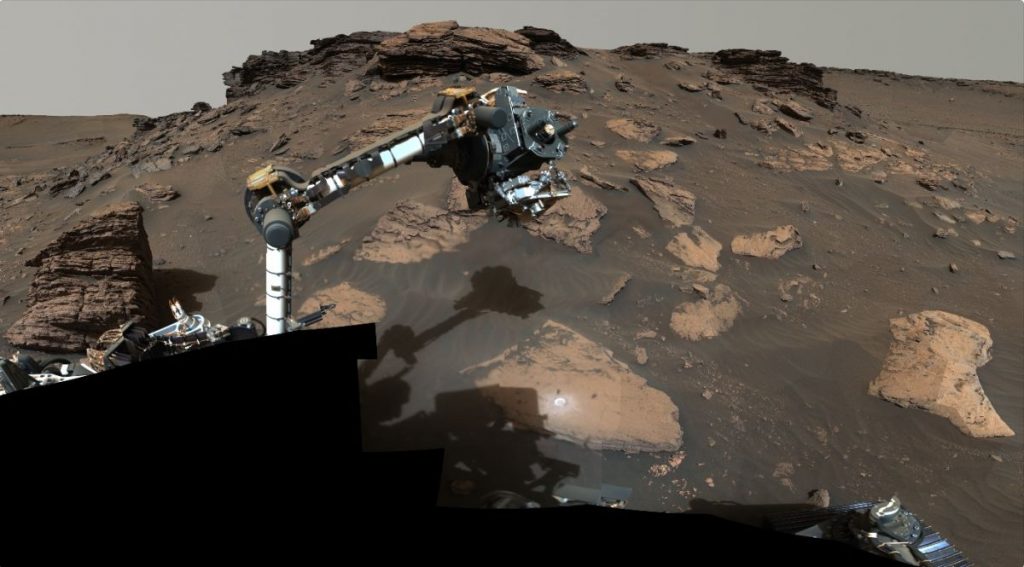 The Perseverance rover’s search for signs of ancient Mars life has picked up considerably.

For the past few months, Perseverance has been exploring the remnants of an ancient river delta inside Mars’ Jezero Crater, which hosted a big lake billions of years ago. The presence of this delta is one of the main reasons that NASA sent the car-sized rover to Jezero, and the site has lived up to its billing so far, mission team members said.

Perseverance has collected four samples from the delta formation since early July. All four were drilled out of rocks that show this part of Mars likely could have supported Earth-like organisms in the ancient past — and might even preserve signs of such microbial life.

“The rocks that we have been investigating on the delta have the highest concentration of organic matter that we have yet found on the mission,” Perseverance project scientist Ken Farley, of the California Institute of Technology in Pasadena, said during a press conference Thursday (Sept. 15).

“And of course, organic molecules are the building blocks of life,” Farley added. “So this is all very interesting, in that we have rocks that were deposited in a habitable environment in a lake which carry organic matter.”

One delta feature that Perseverance recently sampled and studied, a 3-foot-wide (0.9 meters) rock the team calls Wildcat Ridge, is particularly intriguing. Wildcat is a fine-grained mudstone that likely formed at the bottom of Jezero’s ancient lake, team members said. Perseverance’s SHERLOC (Scanning Habitable Environments with Raman and Luminescence for Organics and Chemicals) instrument found that the rock is packed with organics, which are spatially associated with sulfur-containing minerals called sulfates.

“This correlation suggests that, when the lake was evaporating, both sulfates and organics were deposited, preserved and concentrated in this area,” SHERLOC scientist Sunanda Sharma, of NASA’s Jet Propulsion Laboratory in Southern California, said during Thursday’s press conference.

“On Earth, sulfate deposits are known to conserve organics and can harbor signs of life, which are called biosignatures,” Sharma added. “This makes these samples and this set of observations some of the most intriguing that we’ve done so far in the mission and fulfills some of the excitement that the team had when we were approaching the delta front.”

Farley and Sharma stressed, however, that these Martian compounds cannot be considered biosignatures. Organics can be generated and emplaced by purely geological processes, and the data gathered by Perseverance so far don’t tell us enough about the origin scenario to make a call.

Indeed, it will be very difficult for the mission team to make such a determination using the rover’s observations alone, Farley said. After all, the task is complex, and the burden of proof that a claimed detection of alien life must meet is very high.

This reality is built into Perseverance’s mission design. If all goes according to plan, the samples Perseverance is collecting will be returned to Earth as early as 2033 by a joint NASA-European Space Agency (ESA) campaign. Once the samples are here, scientists around the world will be able to scrutinize them with a variety of instruments, many of them far larger and more intricate than anything you can squeeze onto a Mars rover.

Perseverance carries 43 sample tubes, 15 of which have already been sealed. Twelve contain drilled-out rock cores, one is an atmospheric sample (the result of Perseverance’s first-ever rock sampling try, which didn’t go according to plan) and two are “witness tubes.” The mission team will use the witness tubes to determine which materials in the Mars samples, if any, might be contaminants from Earth.

The sample-return plan calls for an ESA-provided Earth Return Orbiter (ERO) and a NASA-built lander, which are scheduled to launch to Mars in late 2027 and early 2028, respectively. Perseverance will drive over to the lander and deposit its samples, which will then launch off the Martian surface aboard a rocket carried by the lander. The ERO will snag the samples in Mars orbit and haul them back toward Earth.

Perseverance, which landed with the tiny technology-demonstrating Ingenuity helicopter in February 2021, should still be healthy enough in the late 2020s to do this sample-delivery work, NASA officials said. After all, NASA’s Curiosity rover, which shares the same basic body plan and nuclear power system as Perseverance, is still going strong inside the Red Planet’s Gale Crater more than 10 years after touching down.

But NASA and ESA have a backup plan as well. Perseverance is collecting two samples from every rock it cores, one to keep on board and another to cache in one or more “depots” on Jezero’s floor. So, if Perseverance isn’t able to hand off the samples itself, the return lander will touch down close to the sample caches and collect the tubes, one by one, using two helicopters.

Those helicopters will launch aboard the lander and will be very similar to Ingenuity, which is still going strong after 31 flights on Mars. The sample-collecting helicopters will have to be a bit bulkier than Ingenuity, however, since they’ll come equipped with wheels to help them roll over to the sample tubes.

The Perseverance team has already picked out a possible spot for the first sample-cache depot — a nice, flat part of Jezero’s floor that would be a safe touchdown site for a lander. On Oct. 19, team members will hold a “go/no go” meeting that will determine if they’re ready to start dropping sample tubes there, NASA planetary science chief Lori Glaze said during today’s briefing.

If the decision is “go,” Perseverance will cache 10 to 11 sample tubes at the site, an operation that will likely take about two months to complete.