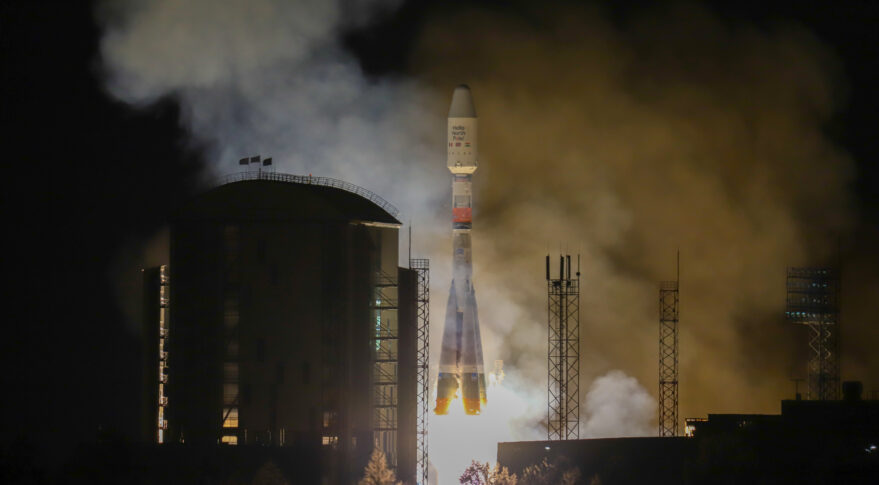 OneWeb is shifting focus to the southern hemisphere after completing coverage north of 50 degrees latitude, following the launch of its latest batch of broadband satellites on July 1.

Arianespace launched 36 satellites at 8:48 a.m. Eastern in its eighth mission for the low-Earth-orbit startup, increasing the size of its constellation to 254 spacecraft.

OneWeb has confirmed signal acquisition with each satellite after separating from their Soyuz 2.1b rocket, which launched from the Vostochny Cosmodrome in Russia.

It will take about a month for the satellites to raise themselves from a near-polar orbit at an altitude of 450 kilometers to 1,200 kilometers, where they will then beam connectivity back to Earth.

They will complete OneWeb’s interim goal of expanding its footprint to the 50th parallel and above — covering Canada, the U.K., Northern Europe, Alaska, and Arctic regions, ahead of partial commercial services before the end of this year.

The venture aims to launch four or five more batches of satellites in 2021 that will focus on filling out the Earth’s southernmost regions, according to Chris McLaughlin, OneWeb’s chief of government, regulation, and engagement.

McLaughlin said 10 more launches are needed to provide global services with the constellation, which recently secured the $2.4 billion it needs for deploying 648 satellites.

“The next phase is to bring the latitude down to the 20-degree mark in the north and also bring the south pole into play and up to 20 degrees in the south,” he told SpaceNews in an interview.

“Then there’ll be a belt in the middle of the Earth, which will be filled in during the course of next year.”

McLaughlin underlined the importance of Australia and New Zealand to the U.K.-headquartered company as countries in the Five Eyes intelligence alliance, which also includes the United States, Canada, and the United Kingdom.

Indian telecom company Bharti Global is set to own the largest share of OneWeb, after exercising a call option to invest an extra $500 million in it to complete the initial constellation’s funding.

It puts Bharti on course to own 38.6% of the startup while the British government, French fleet operator Eutelsat and Japanese internet giant Softbank will each own 19.3%, following regulatory approvals.

However, the British government’s stake includes what is known as a ‘golden share’ that gives it priority voting rights.

British telco BT announced an agreement on June 27 to explore ways it could use OneWeb’s satellites to improve connectivity in parts of the U.K. that are difficult to reach with terrestrial solutions.

Their Memorandum of Understanding comes as the U.K. government commits to spending 5.5 billion British pounds ($7.6 billion) to extend gigabit speeds across the country.

In a statement announcing Arianespace’s July 1 OneWeb satellite launch, U.K. business secretary Kwasi Kwarteng said: “OneWeb’s coverage across the Northern Hemisphere now puts the United Kingdom at the forefront of the latest developments in Low Earth Orbit technology, and we will capitalize on the company’s unique position within this growing market to build a strong domestic space industry and cement our status as a global science and technology superpower.”

OneWeb seeks to partner with enterprises and governments to provide connectivity, rather than delivering services directly to consumers like SpaceX’s Starlink broadband constellation.

SpaceX CEO Elon Musk told the Mobile World Congress on June 29 that Starlink’s footprint is on track to cover everywhere but the poles in August.

He said the service is operational in 12 countries with more being added every month.

Musk said it has “two quite significant partnerships … with major country telcos” and is in discussions with others.

In some cases, he said it could help telcos meet coverage targets required under their 5G licenses, by providing services to hard-to-reach rural areas.

SpaceX’s latest Starlink launch lifted off May 26, giving it an operational constellation estimated to exceed 1,600.

Musk expects to have invested at least $5 billion to as much as $10 billion in Starlink before it starts generating positive cash flow.

Total investment could round out to between $20 billion to $30 billion, he told the conference.

Starlink charges customers $500 for a dish to access its network, which Musk said currently costs the company more than $1,000, although its next-generation terminals will be “a lot less” expensive to produce.

Over time, the company also aims to reduce the price of the terminals to customers to around $250 or $300.