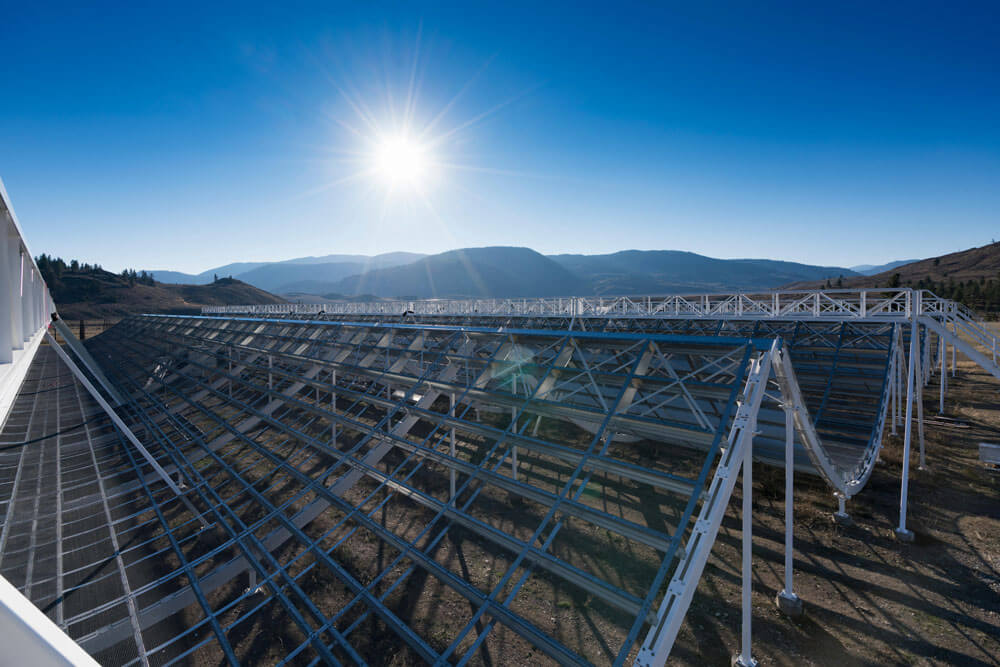 Fast radio bursts are powerful but fleeting flashes of radio waves. Their brevity makes them hard to find; since 2007, astronomers have detected only about 140 of them.

Now, at the recent virtual meeting of the American Astronomical Society, a first data release from the Canadian Hydrogen Intensity Mapping Experiment (CHIME) nearly quadruples that number with 535 new fast radio bursts (FRBs), including 61 bursts from 18 repeating sources. The data come from the detector’s first year of operations, from mid-2018 to mid-2019.

CHIME is uniquely suited to finding FRBs because, unlike most radio telescopes with postage-stamp fields of view, it scans the whole sky visible from its location in British Columbia every night. Astronomers then use digital signal-processing to work through huge amounts of data — about 7 terabits per second, equivalent to a few percent of the world’s internet traffic — to “focus” on FRB signals.

Nevertheless, CHIME only sees the tip of the iceberg. The CHIME/FRB Collaboration calculates that some 800 bright bursts occur every day, and the telescope only sees a small fraction of that.

The radio flashes CHIME does see are spread out on the sky, which means that, as astronomers had already suspected, the sources of these mysterious flashes aren’t concentrated in the Milky Way. But that spread isn’t completely uniform. The team finds that FRBs correlate with galaxies out to 5 billion light-years away.

WHAT ARE FAST RADIO BURSTS?

At least some fast radio bursts likely originate on or around the burnt-out stellar cinders known as magnetars. These neutron stars generate extremely strong magnetic fields, which might tangle or snap to release energy. The case for magnetars grew stronger when a known magnetar was caught emitting an FRB in our own galaxy.

“Magnetars are the only thing we know of that could plausibly produce such energetic flashes in such short amounts of time,” says Kiyoshi Masui (MIT), “but the actual mechanism is not well understood.”

FRBs may originate far out in the magnetar’s magnetic field, or they may arise from events on its surface. It’s also possible that magnetars may make some FRBs but not others. For example, some FRBs repeatedly flash, while others, even when watched for a long time, don’t emit another glimmer.

“Our current sample indicates that there are significant differences in the properties of repeaters and non-repeaters,” says team member Pragya Chawla (McGill University). Repeating bursts last slightly longer and emit more focused radio frequencies than bursts from their non-repeating brethren.

But what causes these differences is still up for debate. We might be seeing two different populations of objects that emit in different ways. Or, as team member Ziggy Pleunis (also at McGill) suggests, “It is also possible that all, or most, FRBs are repeaters.” We might be simply be seeing variations on a theme. For example, he explains, if narrow bursts occur less often, then the narrowest bursts would appear to be one-off events. More data will help astronomers discern between these scenarios.

With hundreds of FRBs in hand, the CHIME team is particularly excited not only about the sources themselves but what can be done with them. “We are now in the era of using FRBs as cosmological probes,” says team member Alex Josephy (also at McGill).

“The distortion of each signal carries a record of the structure it traveled through,” Masui explains. As radio waves travel through hot, ionized gas (whether tightly packed around the FRB source or spread out in the space between galaxies), electrons in the gas scatter the signal. As a result, lower frequencies arrive slightly later to the telescope than the higher frequencies. By measuring how much the signal stretches out over time and frequency, something known as the dispersion measure, astronomers can calculate exactly how much plasma the signal encountered on its way toward Earth.

“We can use them to map out where all the structure in the universe is,” Masui says. “How it’s distributed on large scales, how gas falls into galaxies to form stars, how it gets expelled again by supernovae and black holes.”

Some FRBs have particularly large dispersion measures, which may mean that the signal traveled through a galaxy’s gaseous halo — probably the halo of the galaxy hosting the FRB.

“When we started building CHIME,” Masui says, “nobody knew how many FRBs would be at the frequency we’re observing. There were people who told us we wouldn’t see anything.” Now, it has become clear that CHIME will be bringing in hundreds more FRBs, enabling the study of these mysterious flashes, the galaxies that host them, and the universe around them.

Josephy, A. “No Evidence for Galactic Latitude Dependence of the Fast Radio Burst Sky Distribution.” arXiv.