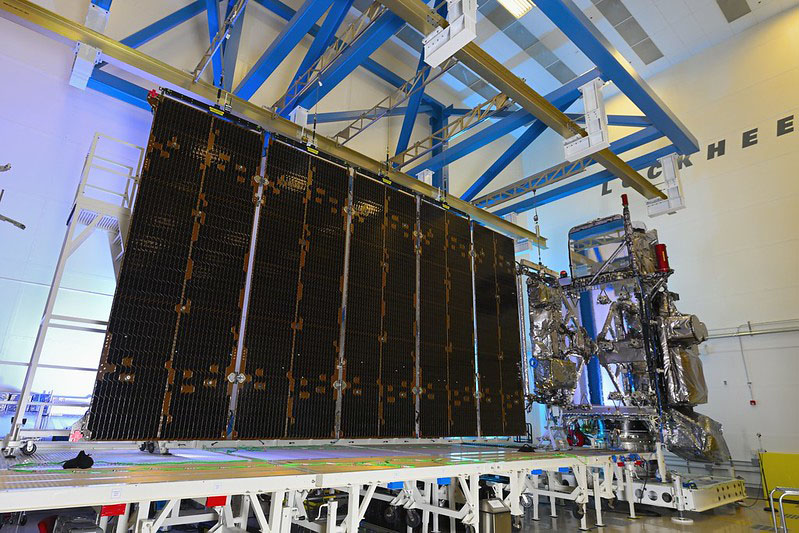 It is the third of four satellites in the National Oceanic and Atmospheric Administration (NOAA)’s GOES-R weather satellite series built by Lockheed Martin [NYSE: LMT] in Littleton, Colorado.

GOES-T will help NOAA provide forecasters in the U.S. and western hemisphere with sharper, more defined images of severe storms, hurricanes, wildfires and other weather hazards.

“The technology and instruments we’ve developed for the GOES-R series enable GOES-T to observe Earth and space weather faster and more accurately than ever,” said Lockheed Martin GOES-R chief engineer, Jagdeep Shergill. “Lockheed Martin has built more than 100 weather and environmental observation spacecraft throughout our history, and we couldn’t be more excited to add GOES-T to that lineup as we use continue to evolve the technology toward the future with each system we build.”

Hitching a Ride with a Friend

Given that GOES-T is the size of a small school bus, it needed a spacious ride to Florida. For this, the team looked no further than the Lockheed Martin-built C-5M Super Galaxy aircraft.
To protect GOES-T’s sensitive, state-of-the-art instruments, the Lockheed Martin team enclosed the spacecraft in a shipping container that functioned as its own miniature cleanroom environment.
That container was then transported from the company’s Littleton facility to Buckley Space Force Base in Aurora, Colorado, where it was carefully loaded onto the C-5 for transit to Florida.
Forecasting Fit for the Future

GOES-T, like the other satellites in the GOES-R series, will provide significant benefits to North America in the form of climate monitoring, ecosystems management, commerce and transportation.

Measurement of weather data in these areas is increasingly important as severe weather patterns driven by climate change impact lives and livelihoods around the world.

GOES-T will also help with:

– Mapping of tropical storms and hurricanes in the Pacific Ocean

– Generating total lightning data that can give early indications of a storm’s strength, thanks to a first-of-its-kind lightning mapper built by Lockheed Martin

More about the Mission

The GOES-R Series is a collaborative acquisition and development effort between NOAA and the National Aeronautics and Space Administration (NASA) to develop, launch and operate weather satellites. NOAA manages the GOES satellites and distributes their data to users worldwide, while NASA oversees the acquisition of the spacecraft and instruments, in addition to the management of the launch through NASA’s Launch Services Program.

In addition to building all four satellites in the GOES-R series, Lockheed Martin also produced two of the primary instruments aboard: the Geostationary Lightning Mapper and Solar Ultraviolet Imager.

With GOES-16 and 17 already on orbit, GOES-T is currently scheduled to launch Feb. 16, 2022. GOES-U, the last of the GOES-R weather satellite series, is in production and planned for a 2024 launch.

Headquartered in Bethesda, Maryland, Lockheed Martin is a global security and aerospace company that employs approximately 114,000 people worldwide and is principally engaged in the research, design, development, manufacture, integration and sustainment of advanced technology systems, products and services.