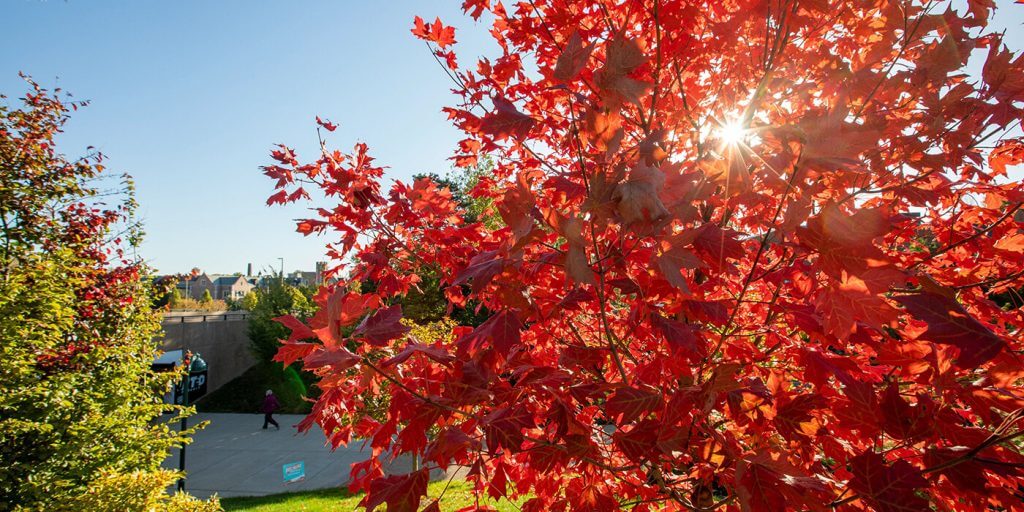 It’s that time of year again. The days are getting shorter, and the nights are cooling down. But when will the natural fireworks display of autumn leaves actually begin this year?

Many people believe that climate change is pushing back the start of fall leaf color to later in the year. The general thinking is that the warmer conditions anticipated under climate change will mean that trees can “hang on” to their green, energy-producing leaves longer. But scientists do not actually see this happening across North American forests, according to an expert at Washington University in St. Louis.

“Warmer temperatures in September and October reduce anthocyanin production in leaves, which could mean that fall colors would become less brilliantly red or purple,” said Susanne S. Renner, honorary professor of biology in Arts & Sciences. “This effect is well documented in certain species, such as sugar maple, where experimental cooling of branches increases anthocyanin concentration and color brilliance. If the first frost comes later than it used to, the brilliant foliage will appear later than it used to.

“However, other factors counteract this. Most important is that trees drop their leaves earlier if they have had a very productive spring and summer. This overrides any delaying effects of a warm fall.

“The end result is that leaves still start to die after about the same amount of time on the tree as they have in years and even decades past,” she said.

In fact, under some scenarios we might even see leaves turning red and yellow earlier. Renner co-authored a 2020 study in the journal Science that showed that increased growing-season productivity drives earlier autumn leaf senescence—the process through which plants break down and reabsorb key nutrients that had been deployed in leaves—in temperate trees.

“If climate warming continues unabated, the situation is likely to change after about 2040, with senescence then starting earlier than it does now,” Renner said.

How do temperature and moisture conditions affect leaf color?

Yellow color in fall leaves is due to the retention of carotenoid pigments (xanthophylls) in senescing chloroplasts. Red and purplish color is due to the accumulation of anthocyanins in vacuoles, starting around September.

Rain does not affect these basic processes. Cold temperatures, however, enhance anthocyanin production, as shown experimentally in sugar maple. One can observe this in the sugar maple trees along St. Louis streets, which start turning colors at the very top, where the microclimate is coldest.

Because climate warming has resulted in warmer falls, in Canada and North America we are seeing less brilliant fall colors. Color brilliance is hard to quantify, but the effect has been experimentally demonstrated in sugar maple trees.

An interesting confounding factor is cleaner air. Thus, in Europe, atmospheric brightening due to cleaner air since 1983 has led to higher plant photosynthesis in the spring and summer—and earlier leaf senescence (compared with 1950–1982). These data, however, concern the breakdown of chlorophyll, not the production of red or yellow colors.

Will all kinds of trees respond in the same ways?

Absolutely not. Experimental work is revealing great species-specific differences. For example, trees that have nitrogen-fixing symbionts never turn red or yellow. Both pigments help protect leaves against damage from sunlight that is no longer usable for photosynthesis because of the massive degradation of chloroplast proteins in aging leaves. Trees with steady access to nitrogen may not bother with costly anthocyanin, but instead simply drop their leaves while still relatively green.

Are scientists already seeing changes to the timing or intensity of leaf color changes?

Warmer falls reduce the brilliance of red and yellow leaf colors, but brilliance is hard to quantify in long time series for many species. Also, many species simply do not turn red or yellow.

We have a paper under review that analyzes satellite data on “greenness” in Northern Hemisphere forests. We found that across a large majority of forest areas, higher spring and summer temperatures have led to an earlier (!!!) senescence by, on average, about 1.5 days per degree Celsius. Senescence here refers to degradation of chlorophyll or greenness.

Where in the world are autumn leaves most likely to be affected by climate change?

Species that change leaf color to red or yellow are much more frequent in North America than in Europe. With continued climate warming and lack of frost nights in October, colors will be less brilliant, but the onset or dates of color change will not change much because of the counteracting factors that I mentioned earlier. In the more distant future (after about 2040), and with unmitigated climate change, leaf senescence in Northern Hemisphere trees and shrubs will occur ever earlier.

Why is the North American fall so red compared with Europe?

Citation:
No, autumn leaves are not changing color later because of climate change (2022, September 23)
retrieved 24 September 2022
from https://phys.org/news/2022-09-autumn-climate.html
This document is subject to copyright. Apart from any fair dealing for the purpose of private study or research, no
part may be reproduced without the written permission. The content is provided for information purposes only.

December 1, 2022
With a small network of satellites around Mars, rovers could navigate autonomously