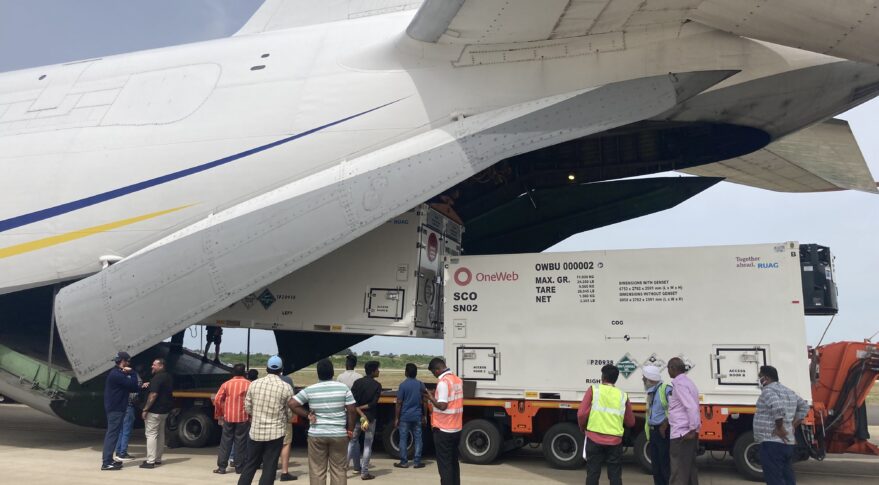 TAMPA, Fla. — OneWeb said Sept. 20 its latest batch of 36 broadband satellites has arrived in India ahead of plans to launch them next month on the country’s largest rocket.

The British startup anticipates the commercial arm of Indian space agency ISRO will launch the satellites on a GSLV Mark 3 rocket in October, OneWeb spokesperson Amanda Boateng said, “and exact details will be released in the coming weeks.”

OneWeb’s satellites traveled from their production facility in Florida to the Satish Dhawan Space Centre in India via a Ukrainian Antonov cargo airplane, which until recently had generally been unavailable for transporting satellites amid Russia’s war in Ukraine.

Companies were forced to use slower-moving ships to transport satellites overseas as Antonovs that had not been destroyed in the war — or owned by Russian air cargo companies subject to Western sanctions — were used by Ukraine to support the war effort.

OneWeb has been unable to expand its constellation since sanctions on Russia forced Arianespace to suspend Soyuz launches in March.

Arianespace had deployed 428 of OneWeb’s planned 648 satellites before hitting the brakes on their 19-launch contract. Arianespace had planned to carry out six more Soyuz missions to complete the constellation, including a launch of spare satellites for network redundancy.

OneWeb pivoted to India and SpaceX to launch the remaining satellites it needs to provide global services, which the operator said will take place across five missions before the end of spring 2023.

One additional launch will take place this year, according to OneWeb, and three more are targeted for early next year to complete the constellation.

Arianespace said Sept. 13 it will support OneWeb’s upcoming launches, including satellite dispenser services for the two missions that NewSpace India Limited is conducting.

The French company said it has reached a settlement deal that could revive its launch services agreement with OneWeb, which is plotting a second-generation constellation.

The GSLV Mark 3, which last launched in 2019, can lift about 9,000 kilograms to LEO, comparable with the Soyuz rockets that deployed 34-36 OneWeb satellites at a time.

SpaceX’s Falcon 9 rocket can send about 22,800 kilograms to LEO.

OneWeb has not disclosed what SpaceX rocket it plans to use, how many satellites could launch per mission, or a specific timeframe for these missions.

OneWeb’s satellites are built by a joint venture between the operator and Airbus called OneWeb Satellites.

In an interview Sept. 14 during World Satellite Business Week in Paris, Airbus Defence and Space head of space Jean-Marc Nasr said all satellites OneWeb needs to complete its constellation have been produced and are awaiting deployment.

A batch of 36 OneWeb satellites that Arianespace had been preparing to launch from Kazakhstan in March was stranded in the country after the mission was scrapped.

OneWeb recently said it took a $229 million charge this year linked to these satellites and the terminated Soyuz launch contract.